Where to go to see Vivid Sydney? Well, you can try Kings Cross and the lovely Sydney lights that they have during Vivid Sydney 2018. Along this road are the best place to stay for Vivid Sydney as well. You can be near the installations when you can walk by night and be back on your accommodations right in time by midnight.

Kings Cross comes alive especially that it’s a usual Vivid Sydney walking tour destination for those who want to have a leisurely walk to see the light. So why not consider Kings Cross after you ask where to see Vivid Sydney? 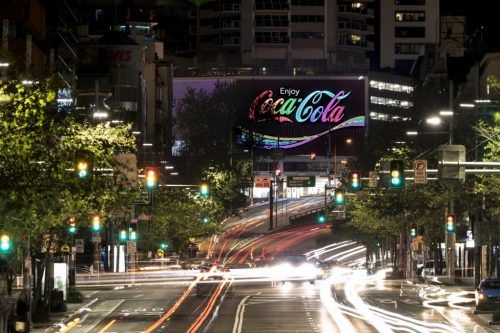 Vivid schedule for Vivid displays along Kings Cross and Darlinghurst. Here’s the best spot for Vivid Sydney 2018 if you want a good stroll by the city when night comes.

What time does this Vivid event start? 6PM-11PM

Where can this be found? Kings Cross and Darlinghurst

How much are the tickets for this Vivid installation? Free

This year the colourful strip along Darlinghurst Road will be lit up through a spectacular display of light and life.

The 40-year-old Coca-Cola sign itself will come alive in 2018 with a creative colour show, while other transformations include the historic Victorian Terrace, World Bar which unfurls a multi-story house party, and the legendary Kings Cross Hotel, which will host cutting-edge artists throughout VIVID.

Don’t miss the transformation of one of the city’s most vibrant suburbs, at VIVID KX.