For Samsung Electronics, IFA 2015 in Berlin was all about the Internet of Things (IoT). And because the IoT is designed to encompass all aspects of our life, there’s an awful lot of great innovations and stylish devices that Samsung presented. Let’s take a look at 10 of the most notable and coolest things from this year’s IFA.

To better explain the IoT, people don’t want to hear technology and numbers as much as they want to understand how the IoT will improve their lives, so Samsung put a creative IoT Zone at the heart of its IFA exhibit. With a series of 24 glass displays, created by architect and designer Ferruccio Laviani to resemble the pages of a popup book, the IoT Zone was a friendly and intuitive way to show people the infinite possibilities of the Internet of Things.

One new product that really woke up visitors was SleepSense, a sensor and sleep analysis system that tracks your sleep patterns and suggests changes to improve your sleep. Just a small, thin pad, SleepSense slips under your mattress, where it can track your breathing, pulse and other traits more accurately than anything else on the market. SleepSense can also work together with consumer electronics in your home to adjust your lights and alarm, to wake you up gradually, when your body is at the best point in its sleep cycle.

Anticipation was high for Samsung’s latest wearable device, the Gear S2, but according to the people who attended the high-energy launch showcase on September 3, the Gear S2 surpassed all expectations. The round design was stylish and fashionable, and the rotating bezel was an intuitive innovation just right for maximizing the usefulness of a wearable. Available in two versions—the Gear S2 and Gear S2 classic—the device is incredibly customizable, with various watch faces and a wide range of colorful straps that can be easily swapped. And with the Gear S2 being Android-compatible, its promises to be the most versatile and functional wearable yet.

At home, the SmartThings Hub can turn any home into a smart home, connecting all sorts of devices on an open platform. Now people can turn on the lights or change the temperature even when away from home, as well as get notifications about movement or potential problems (like smoke or leaks).

But the power of SmartThings goes beyond the home, too. In conjunction with cross-industry collaborators, SmartThings is connecting devices and people across industries, from retail to enterprise, and healthcare to transportation, thus growing an open IoT ecosystem across the world. For instance, BMW cars can now directly integrate you with your home while you are driving, giving you alerts right to your dashboard.

And thanks to the open platform SmartThings was built on, expect plenty more partnerships in the future. As Alex Hawkinson, the chief executive of SmartThings, said during the opening press conference on September 3, SmartThings is all about “peace of mind,” “flexibility” and “control.” 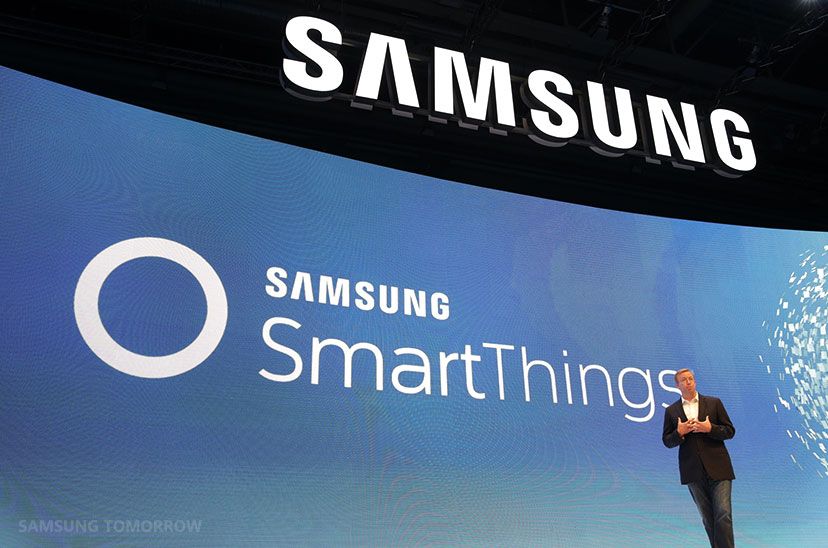 The IoT goes beyond our homes, and one of the most important part of our lives is the car. Now Samsung is bringing the IoT there, too. With the Car Mode for Galaxy app, you can use your smartphone or other wearable device to take calls, listen to music, get directions and even have your text messages read to you, all without taking your eyes off the road or your hands from the wheel. It makes the driving experience much safer and more convenient.

And with Car-Net e-Remote with Volkswagen, you can use your new Gear S2 wearable to integrate with your car. Using your Gear S2, you can see where your car is parked, turn on the air conditioning on a hot day, even stop and start the battery charger for electric vehicles.

With Samsung’s virtual reality headset, the Gear VR, people can dive into content like never before. And this year, for the first time, Samsung took advantage of the Gear VR to create a new type of exhibition experience. At four locations around Berlin, anyone could take part in Experience Zones to see for themselves what Samsung’s IFA exhibit was like. And at Club des Chefs, the partnership with four world-renounced chefs, visitors were able to truly immerse themselves in the food and cooking experience.

With 28 types of TVs, ranging from 32 inches to 105 inches, Samsung now has the right TV for every home, from the smallest apartment to the biggest home. The curved screens of the latest UHD and SUHD TVs are fashionable, too, fitting in with everyone’s home.

With UHD and SUHD TVs offering four times the resolution of traditional HD TVs, people are going to need content at that resolution, too, which is why Samsung is working with the UHD Alliance to create standards for the industry—and they say final certification is nearly ready. In the meantime, Samsung announced Gamefly, a streaming service that offers the latest and hottest games in UHD, as well as agreements with many partners to offer movies, TV shows and other content in the stunning, UHD format.

Behind all of Samsung’s innovations and creations is the dedication to making technology work for people and to fill their needs. With that in mind, this year’s IFA saw many collaborations with the fashion industry to customize people’s phones and wearable devices. In partnership with Montblanc, there was an artist tattooing leather cases by hand for Galaxy S6 edge+ phones. And Swarovski is offering glittering, crystal-covered cases for Samsung smartphones, too. 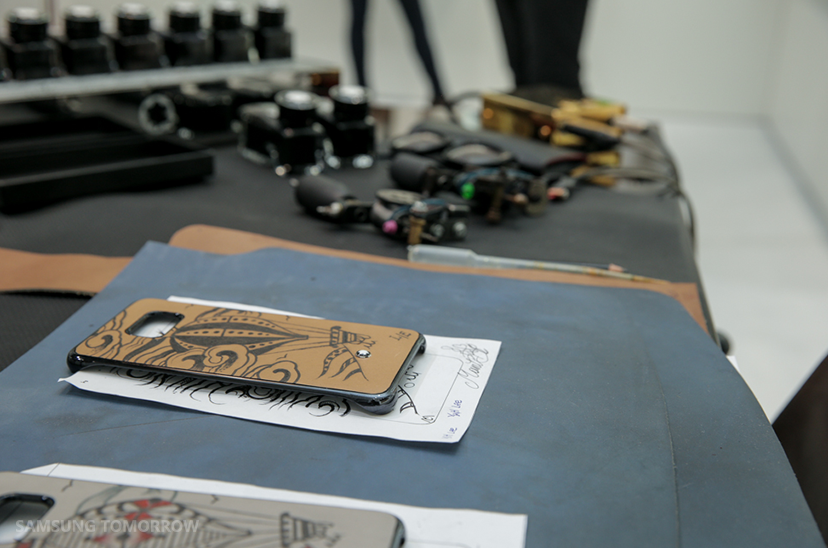 Not only are Samsung’s devices growing more stylish and fashion-forward, but now fashion is increasingly growing more tech savvy. Samsung C&T brought four wearable outfits to IFA, including a suit that has an NFC tag in the wrist, allowing users to change their phone’s mode easily and discreetly, without ever taking it out of their pocket. 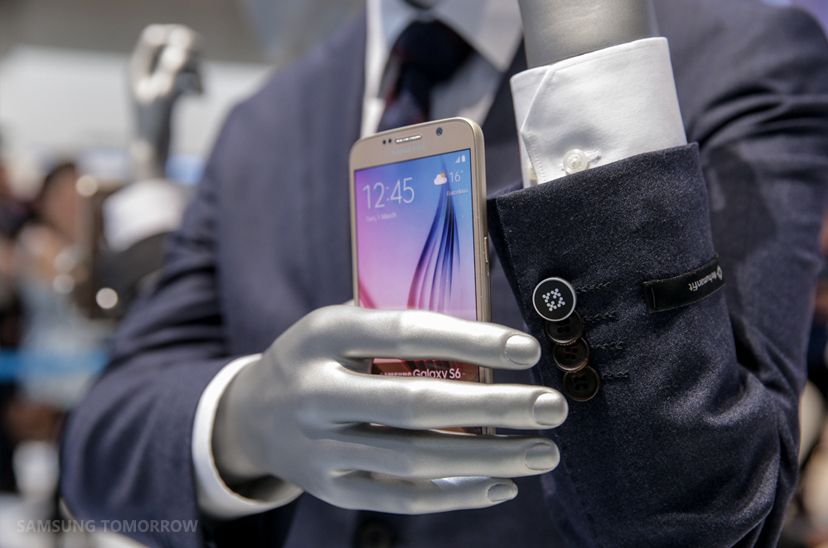 The circle is nature’s perfect shape, without a beginning or an end. And at this year’s IFA, the circle turned up again and again in the designs and ideas of Samsung’s devices. The IoT Zone, at the heart of Samsung’s exhibit, was circular, with 24 displays arranged like the spokes of a wheel. The Wireless Audio 360 speakers are circular in shape, and their sound is likewise omnidirectional, coming from ring radiator technology.

But the biggest circle at this year’s IFA was undoubtedly the Gear S2 wearable. Not only is this Samsung’s first wearable in a stylish circular shape, but the round bezel actually rotates, serving as the key tool of the device’s interface. 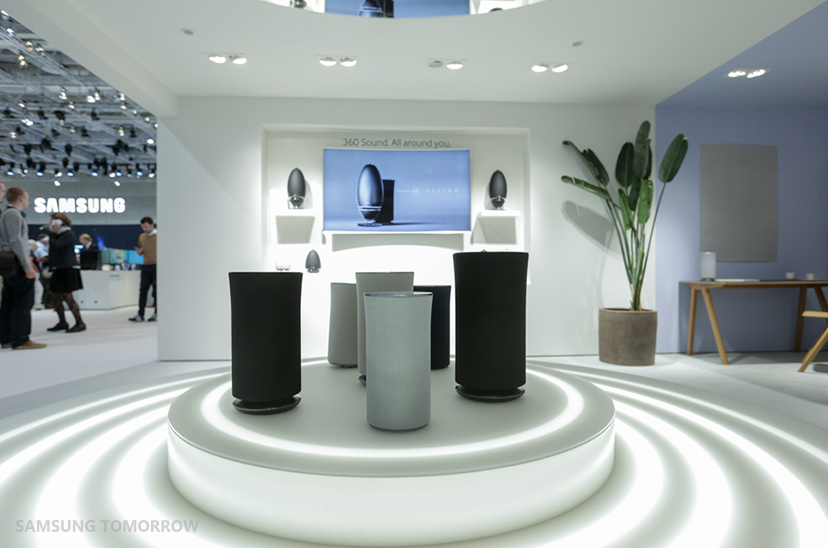