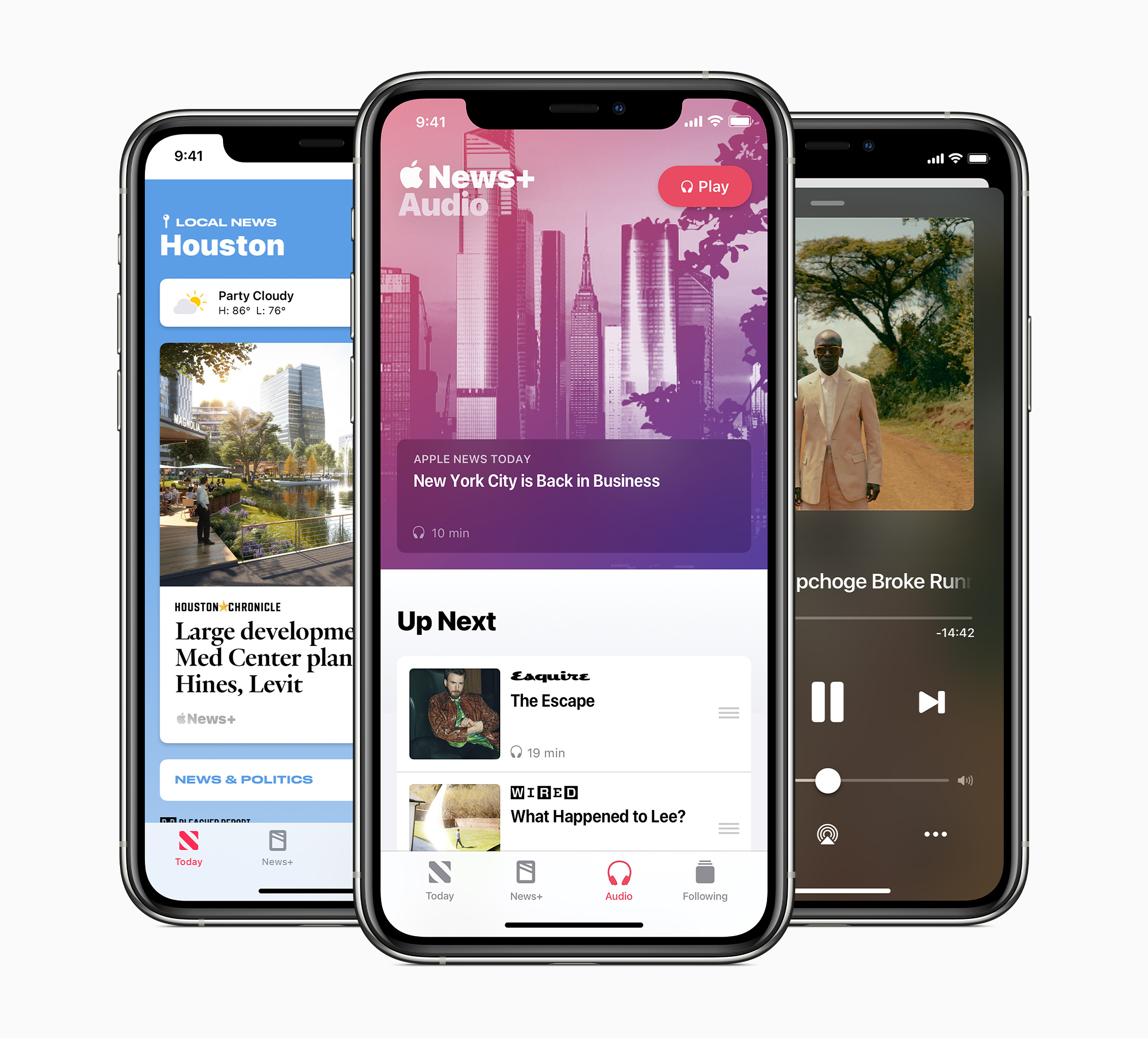 Apple is introducing several new features for Apple News and Apple News+, including audio stories of some of the best feature stories from Apple News+, a daily audio news briefing hosted by Apple News editors, and curated local news collections beginning in five cities and regions and expanding to more areas in the future. Apple News is also adding more top local and regional news outlets for readers and subscribers, including The Charlotte Observer, the Miami Herald, and The News & Observer (Raleigh, North Carolina).
“Apple News showcases so much great journalism, and we’re excited to help bring it to life in new ways with Apple News+ audio stories and a new daily news show, Apple News Today,” said Lauren Kern, editor-in-chief of Apple News. “We also greatly value our many local news partners — our new local news feature highlights their work for readers who live, and are interested, in those communities.”

Beginning today, Apple News will produce about 20 audio stories a week across a wide range of interests. Narrated by professional voice actors, these are audio versions of some of the best feature reporting and long-form pieces published by Esquire, Essence, Fast Company, GQ, New York magazine, Sports Illustrated, TIME, Vanity Fair, Vogue, Wired, and more, and newspapers including the Los Angeles Times and The Wall Street Journal. Audio stories are now available to Apple News+ subscribers in the US.

Apple News+ audio stories are audio versions of some of the best feature reporting from a variety of publications.

With Apple News Today, a daily audio news briefing, Apple News editors and co-hosts Shumita Basu and Duarte Geraldino guide listeners through some of the most fascinating stories in the news — and how the world’s best journalists are covering them. Apple News Today is free to all listeners and available mornings Monday through Friday directly in the News app in the US and on Apple Podcasts.
Audio stories and Apple News Today can both be found in the newly added Audio tab, located at the bottom of the News app, where users can manage their queue and get personalized recommendations. Both new audio features are available on iPhone, iPod touch, and CarPlay.

Apple also introduced support for the News app in CarPlay, so users can listen to audio stories and Apple News Today while driving. Users will be able to sync listening progress across devices: Start listening to an audio story with CarPlay from your iPhone and pick up listening to or reading it later at home.

CarPlay now supports the News app, so users can listen to audio stories and Apple News Today while driving.

Apple News introduced a new curated local news experience currently available in the Bay Area, Houston, Los Angeles, New York, and San Francisco, featuring a variety of content from a diverse collection of local publishers, including a major newspaper in each city and region. Local news collections in Apple News include coverage of topics most important to local communities, such as sports, dining and restaurants, weather, news and politics, and more, with curation by local Apple News editors as well as personalization for each user.

Apple News recently added even more top local and regional newspapers to the Apple News+ catalog: A subscription to Apple News+ in the US now includes access to The Charlotte Observer, the Idaho Statesman, The Kansas City Star, the Miami Herald, The News & Observer, and The State (Columbia, South Carolina). In Canada, leading French-language newspaper Le Devoir is now available to Apple News+ subscribers, and The Globe and Mail, one of the country’s most prestigious national newspapers, will be available to subscribers later this summer.
Apple News draws over 125 million monthly active users in the US, the UK, Australia, and Canada, and has revolutionized how people access news from all their favorite sources. Apple News+ is a single subscription that provides access to written and audio content from hundreds of the world’s top magazines and major newspapers, including the Los Angeles Times and The Wall Street Journal, as well as many local and regional newspapers including the Houston Chronicle and the San Francisco Chronicle.