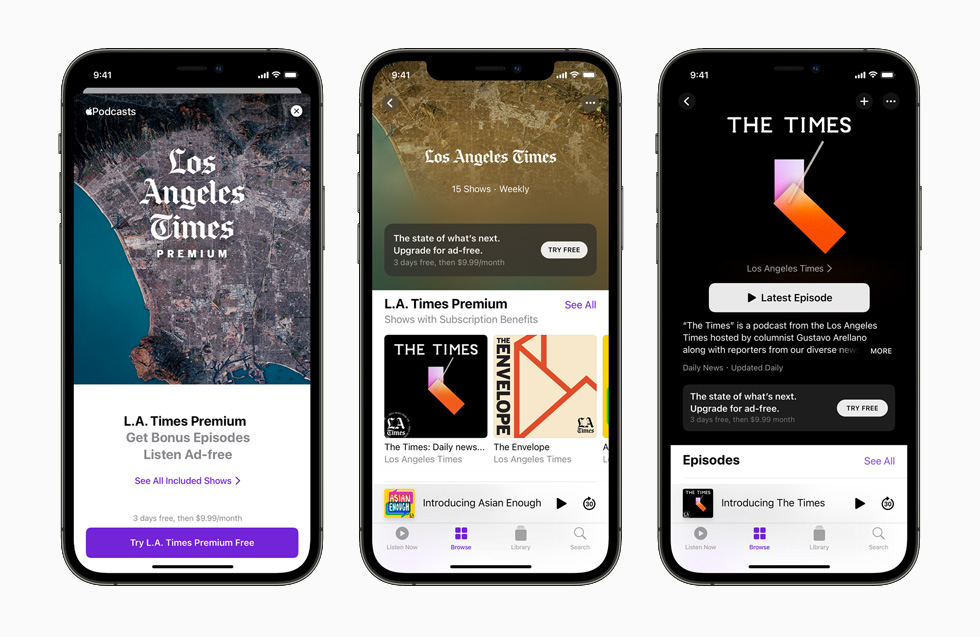 Thousands of Apple Podcasts Subscriptions and channels from the world’s best audio creators, including the Los Angeles Times, Luminary, NPR, Pushkin Industries, and QCODE, are available today, with more launching every week
Apple announced last Jue 15,2021 Apple Podcasts Subscriptions, the global marketplace for premium podcast subscriptions, is now available. Starting today, listeners in more than 170 countries and regions1 can purchase subscriptions for individual shows and groups of shows through channels, making it easy to support their favorite creators, enjoy new content, and unlock additional benefits such as ad-free listening and early access, directly on Apple Podcasts.
Listeners can discover thousands of subscriptions and channels featuring brand new shows that span many genres and formats, including news, comedy, sports, and true crime, offering listeners premium experiences that help them stay informed, entertained, connected, and inspired. These include subscriptions to shows from essential independent voices like “Birthful” with Adriana Lozada, “Pantsuit Politics” with Beth Silvers and Sarah Stewart Holland, “Snap Judgment” with Glynn Washington, and “You Had Me At Black” with Martina Abrams Ilunga; premier studios such as Lemonada Media, Luminary, Realm, and Wondery; and leading media and entertainment brands, including CNN, NPR, The Washington Post, and Sony Music Entertainment.
With Apple Podcasts Subscriptions, listeners can experience never-before-heard stories on Luminary’s “The Midnight Miracle” with Talib Kweli, Yasiin Bey, and Dave Chappelle, and Pushkin Industries’ “Revisionist History” with Malcolm Gladwell; the next chapters of QCODE’s apocalyptic thriller “Blackout,” starring Rami Malek and Aja Naomi King, and Realm’s “Orphan Black,” featuring Tatiana Maslany; the unrivaled chemistry and insightful commentary driving CNN’s “The Handoff,” and Politico’s “Playbook: Deep Dive”; and many more.
“Listeners can’t get enough of their favorite podcasts and want a simple way to support the extraordinary creators who make them possible,” said Oliver Schusser, Apple’s vice president of Apple Music and Beats. “Now, listeners can enjoy new content and additional benefits for thousands of new and popular podcasts, alongside millions of free shows, with more arriving every week. Apple Podcasts Subscriptions will help creators grow their businesses and continue to make podcasting an important source of information, entertainment, connection, and inspiration for hundreds of millions of listeners around the world.”

When listeners purchase a subscription to a show, they automatically follow the show and the page is updated with a Subscriber Edition label so they know they have access to the premium experience. Listeners can discover channels for their favorite podcasts from each show page and through Search, explore recommendations from the Listen Now and Browse tabs, and share channels using Messages, Mail, and other apps. As listeners subscribe to channels, the Listen Now tab expands with new rows that provide easy access to all of the content included in the channel and with their subscription. Listeners who subscribe to two or more channels will see a My Channels row in the Listen Now tab, where they can browse and follow all of the shows offered. 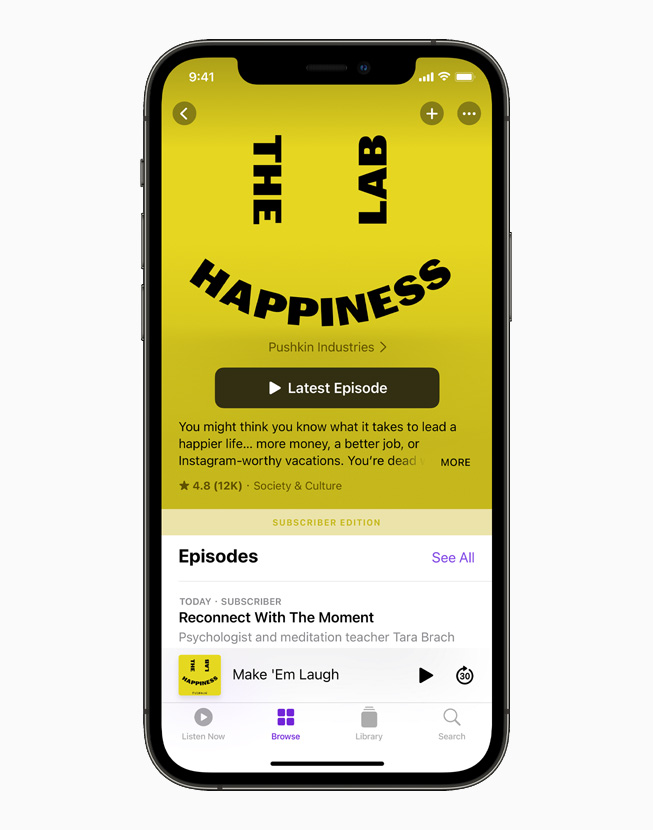 Subscribers automatically receive new episodes with the benefits included in their subscription.

Channels make it easy to discover shows and subscriptions.

Discover recommendations for channels in Listen Now and Browse.

Listeners can access channels with active subscriptions under My Channels in Listen Now.

Listeners can hear new and original shows, and get early access to new seasons of critically acclaimed and fan-favorite series, all ad-free, including:
“Chameleon: High Rollers” with Trevor Aaronson, from Campside Media:
Last year, Josh Dean and Vanessa Grigoriadis told listeners the remarkable true story of the Hollywood Con Queen scam. This summer, the critically acclaimed series returns with a new story about a doomed FBI sting operation in Las Vegas. Trevor Aaronson investigates what happened and how it all went off the rails. Subscribers enjoy new episodes first starting today, plus exclusive bonus episodes throughout the season.
“The Handoff” with Don Lemon and Chris Cuomo from CNN:
The love viewers witness between Don Lemon and Chris Cuomo in the handoff between their evening broadcasts is real. Now, Lemon and Cuomo are stepping out from behind the anchor desk for a weekly conversation where nothing is off limits. “The Handoff” is available today exclusively to subscribers on Apple Podcasts.
“The Midnight Miracle” with Talib Kweli, Yasiin Bey, and Dave Chappelle, from Luminary:
A groundbreaking original series that uniquely blends the salon and variety shows formats, recorded during Chappelle’s legendary 2020 Summer Camp in Ohio. “The Midnight Miracle” is available exclusively to Luminary subscribers today.
“Revisionist History” with Malcolm Gladwell, part of PushNik from Pushkin Industries:
Bestselling author Malcolm Gladwell’s journey through the overlooked and the misunderstood moments in history continues. In this new season, Gladwell races autonomous vehicles, rewrites one of America’s most beloved fairy tales, falls in love with a small college in New Orleans, and dives into dirty laundry.
“To Live and Die in LA” with Neil Strauss, from Tenderfoot TV:
After revealing the truth about the tragic death of an aspiring Hollywood actress, the award-winning series returns to uncover the baffling, tragic, and mysterious disappearance of Elaine Park. Neil Strauss investigates — along with his wife, neighbors, Incubus guitarist Mike Einziger, and concert violinist Ann Marie Simpson — to advance the investigation and provide closure for her loved ones. TenderfootPlus+ subscribers will gain early and exclusive access to upcoming bonus episodes.

Even More Subscriptions with Channels

Notable international subscriptions and channels available beginning today include ABC, LiSTNR, and SBS from Australia; Abrace Podcasts from Brazil; CANADALAND and Frequency Podcast Network from Canada; GoLittle from Denmark; Europe 1, Louie Media, and Radio France from France; Der Spiegel, Podimo, and ZEIT ONLINE from Germany; Il Sole 24 Ore and Storielibere.fm from Italy; J-WAVE from Japan; Brainrich from Korea; libo/libo from Russia; Finyal Media from the UAE; and Broccoli Productions, The Bugle, Content Is Queen, the Guardian, Immediate Media, and Somethin’ Else from the UK.
Creators interested in offering subscriptions and channels are encouraged to visit Apple Podcasts for Creators.