Apple has unveiled the most significant upgrades to the Apple Watch since it first went on sale in 2015, turning the product into more of a health-monitoring device.

The new version, called Apple Watch Series 4, has larger screens that fit into the same overall watch sizes, and new health sensors and apps such as an electrocardiogram, or ECG, monitor. It also includes a faster dual-core processor called the S4, Apple said. The new smartwatch line was introduced on Wednesday at Apple headquarters in Cupertino, California by chief operating officer Jeff Williams.

Williams described the latest Watch as an “intelligent guardian of your health”, noting that Apple got clearance for the ECG app from the US Food and Drug Administration, the first of its kind.

The feature “is really a game changer as the first wearable device with this feature”, Evercore ISI analyst Ross Muken wrote in a note to investors. “This update really establishes the company’s increasing efforts to push the watch as a serious medical device.”

The Watch has more powerful sensors so it can spot when someone has a hard fall. It delivers an alert and calls emergency services if the user doesn’t move for one minute after a fall, Williams said. The ECG capability, available later this year, helps the device sense atrial fibrillation, an irregular heart rate that can increase the risk of stroke, heart failure and other heart-related complications.

“The FDA worked closely with the company as they developed and tested these software products, which may help millions of users identify health concerns more quickly,” FDA commissioner Scott Gottlieb said in a statement. Health-care products on ubiquitous devices, like smartwatches, may help users seek treatment earlier and will empower them with more information about their health, he added.

The new Watch line starts at US$399, Apple said, compared to the $329 starting price of last year’s model. The device has 50% louder speakers, improving interaction with the Siri digital assistant. The back of the Watch lets more cellular signals through, making calls clearer. Battery life remains the same.

Fitbit, the maker of popular fitness devices, fell more than 5% as Apple unveiled its Watch plans.

The Apple Watch hasn’t been a monster hit like the iPhone, but it’s the world’s best-selling smartwatch and is helping the company expand health-care related services. The Watch is part of the company’s Other Products segment, which saw revenue jump 37% to $3.7-billion in the fiscal third quarter. Apple shipped 4.7 million watches in that period, beating rivals like Xiaomi and Fitbit, according to International Data Corp.  — Reported by Mark Gurman,

For the first time since its introduction four years ago, the Apple Watch has a new design—and we don’t just mean the addition of a red dot on the Digital Crown. The new fourth-generation watch includes a larger screen and a slightly bigger case, but still retains the classic styling that has made the Apple Watch a worldwide hit.

But the beauty of the new Apple Watch isn’t skin deep. We can’t wait to get our fingers on that new display, but there’s way more to it than a few extra pixels. Here are six more reasons you’ll want to upgrade to a new Apple Watch and one reason why you might want to wait.

The design is better than ever

If you look at Apple Watch, you probably won’t notice any major changes to the case: It’s still square, it still has a Digital Crown, it still has a single button on the side. But if you look closer, you’ll see subtle changes that improve the look and feel of the Apple Watch. For one, the screen is way bigger, with more than 30 percent more pixels. It’s also thinner, so even though the cases are two millimeters bigger than the previous generation at 40mm and 44mm, respectively, the entire package should feel less substantial.

If you look at Apple Watch, you probably won’t notice any major changes to the case: It’s still square, it still has a Digital Crown, it still has a single button on the side. But if you look closer, you’ll see subtle changes that improve the look and feel of the Apple Watch. For one, the screen is way bigger, with more than 30 percent more pixels. It’s also thinner, so even though the cases are two millimeters bigger than the previous generation at 40mm and 44mm, respectively, the entire package should feel less substantial. 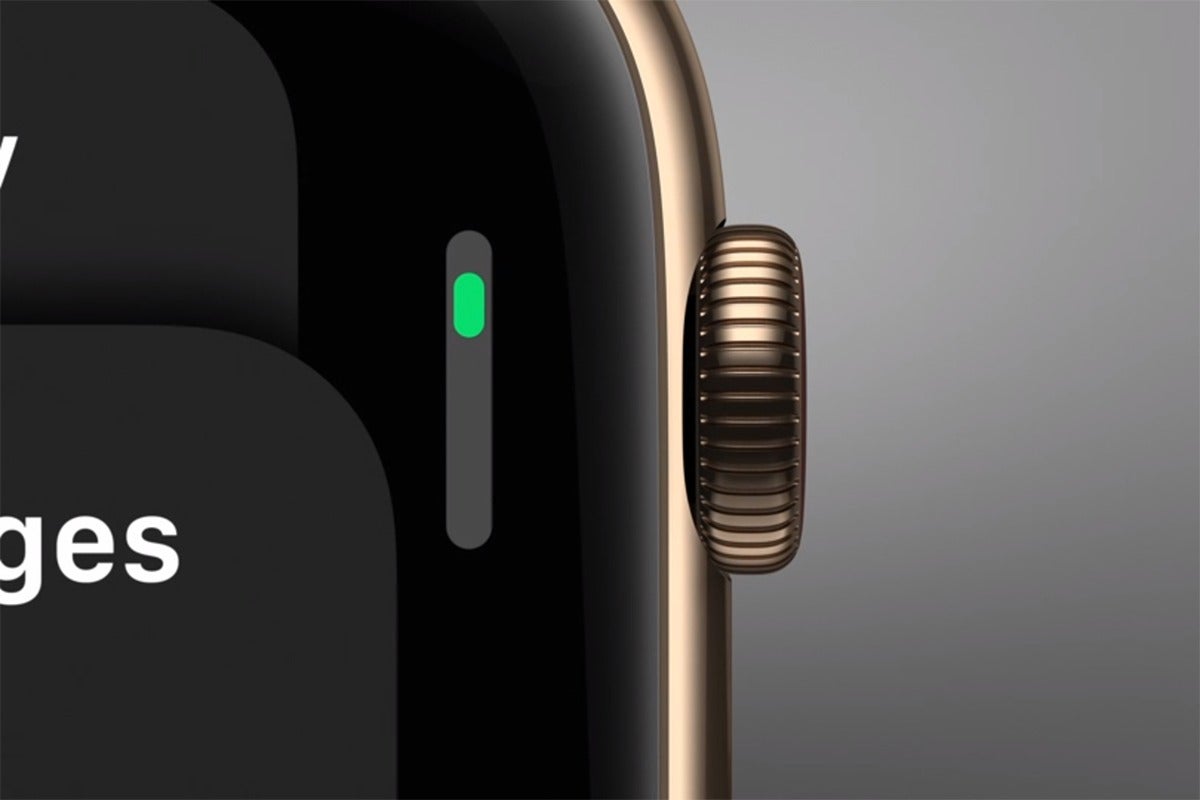 The Digital Crown on the Apple Watch Series 4 does a whole lot more.

Additionally, the corners have deeper curves, so it’ll look even better on you wrist. The microphone placement has been moved to make phone calls clearer, the back is made of black ceramic and sapphire to improve connectivity, and the speaker is 50 percent louder so all those Siri requests will sound even better.

There are way more faces

To accompany the 30-percent larger screen, Apple designed several new faces to take advantage of the extra real estate, starting with an update to its classic Utility face with space for up to eight complications now. Apple showed off a face with either three international clocks or three contact circles, so the possibilities are kind of endless.

You can fit an insane amount of complications on the new Apple Watch’s bigger screen.

If you don’t want to fill up your screen with complications, there are also all-new designer faces for the Apple Watch Series 4. There’s a new Breathe face that gives you animated guides when you need to take a stress break, as well as Fire, Water, and Vapor faces that fill your screen with lush, fluid animations whenever you raise your wrist. And finally, if you want a Nike Series 4 Apple Watch, those faces have been reimagined as well.

The Digital Crown is super-charged

On previous Apple Watches, the Digital Crown pretty much served two functions: going home and scrolling. It still does those things on Apple Watch Series 4, but you’ll now receive haptic feedback as you navigate your watch so you won’t scroll too fast. That’s nice and all, but the biggest enhancement to the Digital Crown is one you won’t see: an electrical heart sensor.

The Digital Crown is also an ECG sensor on the Apple Watch Series 4.

That’s right, you can now take an electrocardiogram (ECG) right on your wrist. Just press your finger against the side of the crown and your watch will start measuring your heart rhythm, recording the data in the Apple Health app and alerting you to irregular patterns. Not only has it already received FDA approval, but Apple says it is the first ECG sensor offered over the counter directly to consumers.

It’ll know when you fall

In addition to a new S4 chip, which is up to two times faster than the previous generation, Apple has also added a next-generation accelerometer and gyroscope to the new Apple Watch, which will make measuring movements up to eight times faster. That’s great for exercising, but there’s a cool new trick the new watch can do too: detect falls.

The Apple Watch Series 4 can detect when you fall.

We’ve all seen the commercial where the elderly woman falls and screams, “I’ve fallen and I can’t get up!” Now, your Apple Watch can detect when you’ve fallen and instantly send you an alert with an SOS button that will call 911 when pressed. And what’s more, if your watch detects that you haven’t moved for a minute following a fall, it will alert the authorities and provide your location.

It could save your life in a whole new way

We’ve all heard stories about how the Apple Watch has saved people’s lives by alerting them to a high resting heart beat, but now Apple has added two new heart rate detection features to the new watch. Firstly, it’ll notify you if your heart rate is too low. And it’ll also monitor your heart rhythm and alert you if it detects an irregular rhythm, which could be a warning sign of atrial fibrillation, which could lead to blood clots, strokes, and heart failure.

Your old bands will still work

Despite being slightly larger than the previous generations of watches, all of the old bands you’ve collected will still work, as well as any third-party ones. And there’s a cool new one: Nike has added reflective yarn to its Loop band so runners and bicyclists will be even more visible at night.

The features of the new Apple Watch Series 4.

The kicker to the new Apple Watch Series 4 is that it’s a lot more expensive than the Series 3 watch. Apple Watch Series 4 with GPS starts at $399 now, rather than $299 before. And if you want one of the cellular models, it’ll cost you an additional $100, starting at $499. So you won’t be able to buy as many watch bands to go with it.