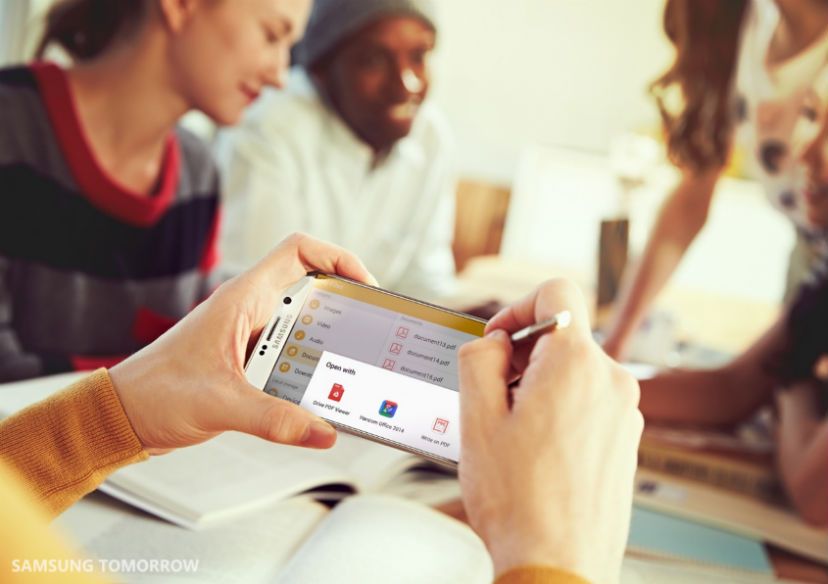 hen the revolutionary Galaxy Note was first released in 2011, the device set a new standard in smartphone culture, setting a high bar for all up-sized mobiles that would soon follow. Since then, the Galaxy Note series has expanded and improved with each new model; now, the Galaxy Note5, the latest addition to the series, is also the most carefully and beautifully designed.

As the Galaxy Note has changed the smartphone from a device to consume content to one that can be used to create content, it only makes sense that its aesthetics should inspire. Influenced by the Galaxy S6, Samsung has given the new Note model a facelift, incorporating a harmonious blend of metal and glass into its premium design.

Although its screen size is the same as the previous model’s at 5.7 inches, Samsung has made the Galaxy Note5 a bit slimmer with a narrower bezel and curved back to provide a more comfortable grip so the device can be easily operated with one hand when on the go. The oversized, flat screen is easy to write on and better optimized with a 5×5 grid home screen, allowing more apps and widgets to be displayed in plump square-shaped icons at one time.

Another portability feature is Samsung Pay, a simple and safe mobile payment service you can use virtually anywhere that cards are accepted. With tokenization, Samsung KNOX, and fingerprint authentication, Samsung Pay provides a secure payment system and reduces the security risks inherent to plastic cards.

The Power of the Pen

What sets the Galaxy Note series apart from its competition is the S Pen, which has also received an upgrade. While the previous version featured enhanced handwriting capabilities, increased pressure sensitivity and support for pivot, speed and tilt, the latest was designed with ergonomics in mind, to be more solid and balanced in the user’s hand. With a “push-pull” design, it also ejects more easily from the device, requiring only a quick click. 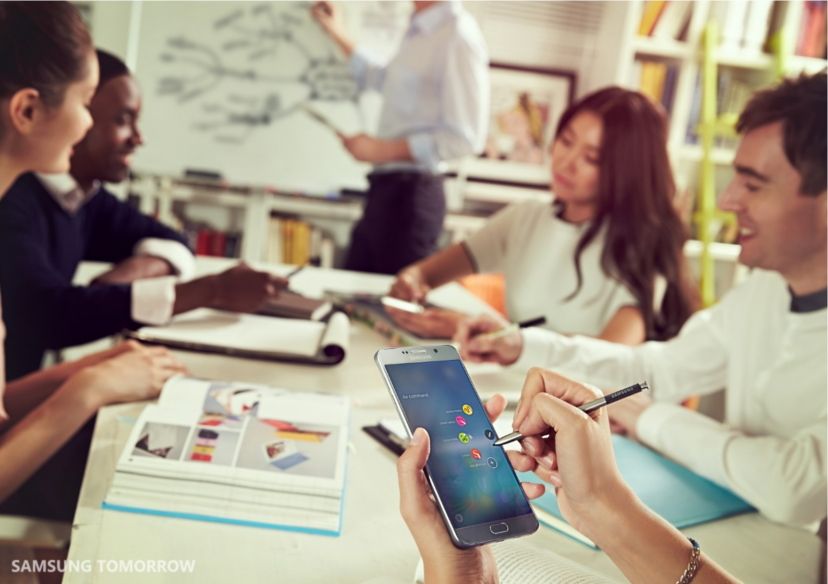 The new, more practical S Pen allows for greater productivity, thanks to a suite of new functionality features that let users collect and clip images, and capture and annotate lengthy webpages and documents through the fast-launching Air Command. When combined with Multi Window, tasks such as locating an address on a map or sharing information with a friend can easily be carried out in a fraction of the time.

Furthermore, for those moments when using multiple devices is necessary, SideSync allows for the easy transfer of content from the Galaxy Note5 to a PC or tablet. Effortless installation and automatic connection between devices make tasks like accessing files or checking phone notifications on a PC incredibly easy.

Yet, the coolest of these new features is a function which allows users to jot down doodles and memos on a black screen, without even unlocking the Note. No fleeting idea is ever forgotten with the screen-off memo feature of the new Note5.

Creativity at Its Finest

Sticking to its roots as a device that inspires creativity as well as enhances productivity, the Galaxy Note5 has optimized its multimedia capabilities to allow for more creative and customizable content development.

In addition to being able to launch the camera in less than one second with a double click of the home button, users can enjoy improved video capabilities, including Steady Video, which provides Video Digital Image Stabilization on both the front and rear cameras for sharp, crisp video on-the-go, Video Collage Mode, which allows users to record and edit short videos easily in various frames and effects, and 4K (UHD) video filming. Similarly, the “Live Broadcast” mode in the native camera app lets users live-stream Full HD video to personal contacts or the public.

With such innovative video features, family members and friends that live thousands of miles apart no longer seem so far away from one another. Journalists and filmmakers can cover big stories without having to tote around loads of bulky equipment. Individuals have the means to have their voices heard in an entirely new way.

The features that enhance the content consuming experience on the Galaxy Note5 are just as spectacular. The device boasts the same stunning 5.7-inch Quad HD Super AMOLED screen, which provides true-to-life colors and an immersive viewing experience.

As a more powerful and personal device than ever, the new Galaxy Note5 promises a more enhanced user experience, more immersive multimedia and a greater way to create. Take note—this device has got it all.