When Google (and Motorola) showed off the Nexus 6 last year, most nerds were excited. Others, making up a surprisingly vocal minority, reacted as though the companies dropped ice cubes down the backs of their shirts. Bigger isn’t always better, and they were more than a little concerned that the days of easy-to-grip Nexus phones were nearly over. They were wrong. To go with the big-screened Nexus 6P, Google once again teamed up with LG on a Nexus 5 — the 5X this time — and it’s shaping up to be the successor that N5 fans have been hoping for.

First off, yes, it nestles nice and easily into even small hands (mine are probably slightly above-average but there were some surprisingly tiny mitts at this event). The 5.2-inch 1080p IPS LCD, cutesy rounded aesthetic and the plastic body’s almost-nutty lightness make the Nexus 5X feel much more compact than it actually is. And as if it needed even more cute fuel, you’ll be able to get it in a fetching robin’s egg blue that’s a little reminiscent of that phone Nextbit is working on. Naturally, none of this would be worth a damn if the 5X failed as a phone, and it definitely doesn’t. You see, there’s a Snapdragon 808 (which we’ve seen in the LG G4 previously) and 2GB of RAM here — easily plenty of horsepower for anyone who doesn’t want/need to live on the bleeding edge of phone performance. I spent maybe a half hour with the thing in total and couldn’t get it to stutter or flip out, even with the non-final version of Android 6.0 Marshmallow running on it. Not bad.

It would’ve been easy for Google and LG to just shrug and phone things in with a weak-sauce camera, but that’s thankfully not the case. The Nexus 5X shares an impressive 12.3-megapixel rear camera with the 6P, which means it also shares those sweet, photon-slurping 1.55-micron pixels. Both did a solid job snapping photos in a weirdly lit, uncomfortably packed demo room, but we’ll have to wait until we get a review unit before we can pass any real judgment. The similarities don’t end there, either — Google really is looking at these things as siblings. Both have the Nexus Imprint fingerprint scanner (which worked well) and a USB Type-C charging port. While the 5X is a sort of love letter to a certain kind of Nexus fan, its limited memory options will make it harder for hardcore mobile nerds to take seriously. Yes, yes, Google has sunk plenty of cash and effort into building its cloud, and the original N5 didn’t have a memory card slot either, but it still sucks that the 5X will only be available with 16 or 32GB of storage and without any way to expand it further. 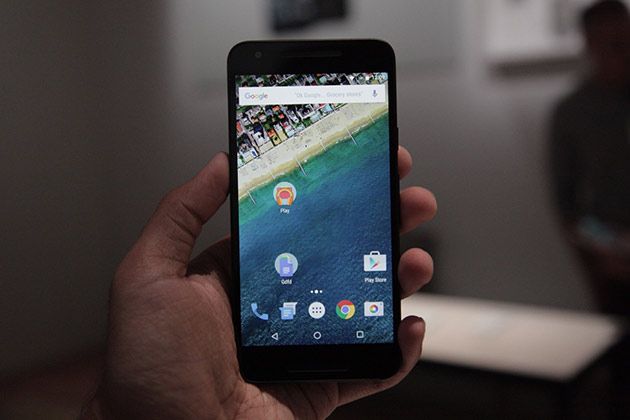 Speaking of which, you’ll be able to pre-order a Nexus 5X today, with the first shipments going out sometime in October. At this early stage, the hardware seems promising and Marshmallow already appears to be a worthy update (even if the nature of Android has already been changing a bit). We can’t blame you if you want more info before you pull the trigger — just stay tuned for our full review.