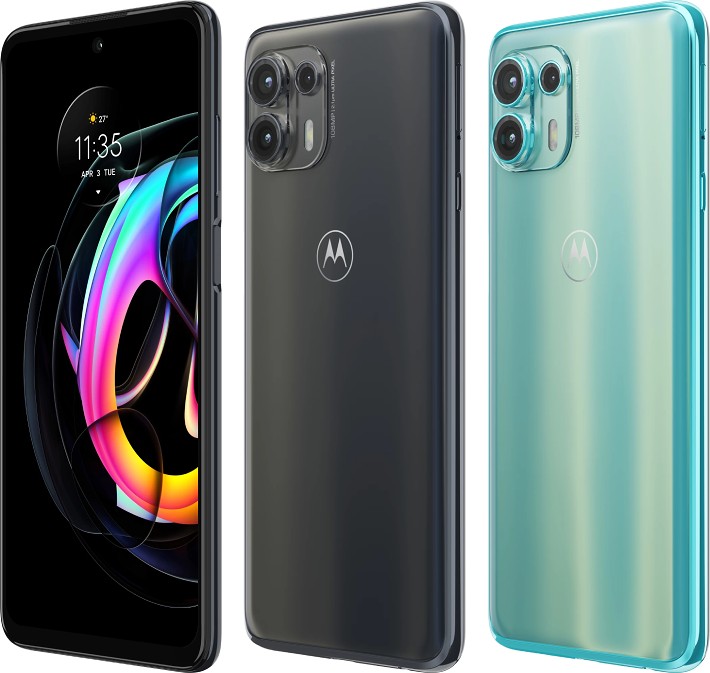 It shares a few similarities with the Motorola Edge 20 Lite, even with the design, but this is an even more toned-down variant. Despite that, as we’ve been using this for quite some time now, we think it’s worth checking out.

The Motorola Edge 20 Fusion feels and looks like it has a robust build. It’s quite chunky though due to its large battery capacity, but it’s not as heavy as it looks. The body is entirely made of plastic, yet it doesn’t feel cheap at all. Its matte finish at the back is a nice touch, making it a little less prone to smudges—just less. At the back, there’s a subtle M logo sitting in the middle, while on the upper left is its triple rear camera setup along with an LED flash in a square protruding module. The camera bump is quite thick so we suggest slapping a case on to avoid accidental scratches on the lenses. We’re glad to say that for its range, the Motorola Edge 20 Fusion is IP52 dust and water-resistant so a few water splashes shouldn’t be a problem. It’s available in two colors: there’s Cyber Teal and Electric Graphite, which is the one we have. On the right are the volume rockers and power button that also doubles as a fingerprint scanner. Meanwhile, on the left is a dedicated Google Assistant button, along with a card tray for two nano-sized SIM cards and a microSD card in a hybrid setup. On top we have the secondary microphone, then at the bottom are the 3.5mm audio jack, USB-C port, main microphone, and loudspeaker.

Flipping upfront, we get a 6.7-inch FHD+ 90Hz OLED display with 8-bit color, sizable bezels, and a punch-hole notch on the upper middle. Right above that is the earpiece. The front camera notch doesn’t really bother us, but by default, whenever you launch an app, a black bar will cover the top area unless you allow it to fill the full screen in the settings.

If you like to watch movies or binge-watch your favorite Netflix series on your smartphone, then the Motorola Edge 20 Fusion’s OLED display will really impress you. It’s HDR10 certified, has good viewing angles, colors are punchy, and we get inky blacks. Its system-wide dark mode gives a satisfying experience that reminds me of using a Pixel phone. And since we get an option for a 90Hz refresh rate, scrolling through the UI is definitely a smooth experience. However, do note that this display is highly prone to fingerprint smudges. Audio-wise, sound only comes out through its down-firing loudspeaker and it can get loud enough for a medium-sized room. The quality isn’t really impressive but it’s not the worst either. There’s quite a balance of highs and mids, but like most mid-rangers, it’s lacking on bass. We still suggest taking advantage of the headphone port for better sound quality.

The Motorola Edge 20 Fusion has impressive-looking specs on paper. Its triple rear camera setup is composed of a 108MP (main), an 8MP (ultrawide and macro vision lens), and a 2MP (depth) sensor. Upfront is a 32MP selfie camera. By default, its standard mode uses the main 108MP lens to produce 12MP shots. And looking at some samples, they’re fairly decent. Under good lighting conditions, we often get sharp and vibrant photos with an acceptable dynamic range. However, it’s rather disappointing to see that it is inconsistent when it comes to color reproduction and saturation. Sometimes it excessively processes the colors green and blue. Although we don’t always get muddy or shaky photos, we still suggest taking multiple shots and tapping to focus to get better outputs. Since we get a high 108MP lens, you can take ultra-quality shots but with still the same picture quality as in standard mode. You can turn this on in the settings. The ultra-wide lens is deliverable and can still be very useful but it does have tendencies to look shadowy and with a fish-eye look. As for night photography, photos come out soft and a bit muddy when you’re not using the night mode feature. But with the night mode on, it will slightly enhance the sharpness and shadows. Overall, it’s actually not that bad with the light work. Macro photography, on the other hand, impressed us. It’s easy to focus when taking a shot and the details on the subject are on point. Its portrait mode is also flexible to use as it allows you to adjust the blur before taking a photo, and we like how the effect looks clean in separating the subject from the background. Now when it comes to selfies, it can be a hit or miss. Skin tones can be a little bit too dark, and sometimes, photos can come out noisy even in well-lit conditions. Hopefully, this can be fixed with a software update.

For videos, you can shoot up to 4k at 30fps but if you want to use its stabilization you can toggle it down to 1080p at 60fps. Also, take note that files are set to H.265/HEVC encoding by default. There are other camera features onboard that you can play around with including pro, macro video, spot color, panorama, cinemagraph, live filter, timelapse, and dual capture.

Motorola Edge 20 Fusion runs on stock Android 11 with a few Motorola personalization features—making this one of its biggest key takeaways.

You can expect a straightforward Google-centric interface with the brand’s Moto app that allows you to tweak the shortcut gestures, icon style, and audio effects. You can also choose from a number of nicely designed wallpapers, some are even interactive. There are some notable features here that you might find useful such as Gametime which is like Game Mode. Then there’s Attentive Display that prevents the screen from going to sleep while you’re looking at it, and there’s also Peek Display that gives quick access to interactive notifications while you’re screen is locked. All of the settings can be accessed through the general settings menu like what we’re used to, and of course, pre-installed apps are kept to a minimum. Out of the 128GB of storage space that we get, we’re left with 108GB of usable space out of the box. If it’s still not enough, you can expand it up to 512GB via a microSD card.

Powering the Edge 20 Fusion is a MediaTek Dimensity 800U 5G processor, with 6GB / 8GB of RAM, and 128GB of internal storage. The experience is highly deliverable as it can handle all the basic tasks we throw at it like web browsing, video streaming, and social media scrolling. It is pretty smooth and responsive, thanks also to its 90Hz refresh rate. You can also manually set it to 60Hz if you want to save more battery life.

Its gaming performance is nothing over the top, but still very playable. We were able to play heavy games such as Asphalt 9 and Genshin Impact, but it’s best to lower the settings for more seamless gameplay. The phone does warm up quite a bit during heavy usage, but it never reaches a point where it’s uncomfortable.

For some numbers, here are the benchmark scores that we got:

For biometrics and security, there is a side-mounted fingerprint sensor that’s embedded in the frame and it reliably works well alongside the face unlock. The lock button even has a quirky feature called power touch that you can turn on in the settings. This will allow you to double-tap on the power button to trigger your quick app shortcuts.

Quickly on connectivity, it has support for 4G LTE, 5G, GPS Bluetooth 5.0, WiFi 6, NFC, OTG, and a native FM Radio app. Now one of the things we liked about this phone is its long-lasting battery. We have a 5,000mAh capacity which might seem average today, but its display and internals are thankfully not very high consuming. When we ran it through the PCMark Work 3.0 battery test under a 90Hz refresh rate, the device yielded 16 hours and 6 minutes. Meanwhile, in our standard video loop test which involves playing a 1080p video on loop under 60Hz refresh rate, 50% brightness and volume, wired headset plugged in, and Airplane mode turned on, we got a very good 24 hours and 1 minute. Charging on the other hand takes about an hour and a half from 0 to 100% with its 30W fast charger.