Huawei has been teasing the launch of their two new flagship smartphones for a few months now and today the company has officially unveiled them. We’ve heard a lot of rumors about Huawei launching three devices at this event, being the Huawei Mate 10, the Huawei Mate 10 Pro and lastly the Huawei Mate 10 Lite. There has been some miscellaneous chatter about the company making a Porsche Edition again just like they did last year, and they spoke about it today as well.

There’s been a lot of focus on AI from Huawei as well as other smartphone OEMs this year. The 2017 trends have mainly been about shrinking the bezels of our devices, but there has also been a growing trend for artificial intelligence. Silicon vendors including Qualcomm and Huawei have started to integrate dedicated hardware into their SoCs specifically for AI and over the next few years we’ll see various smartphone makers taking advantage of this hardware. Huawei made it a point to talk about the AI capabilities of its latest Kirin 970 SoCearlier this year and this is something the company touched on at the launch event for the Huawei Mate 10 and the Mate 10 Pro. Huawei has said the Kirin Neural Processing Unit (the NPU) that they’re using is capable of 1.92 TFLOPs of FP16 which is said to be twice as much as Apple can do with their new Neural Engine, and in today’s event they showed the Mate 10 handling computer vision tasks 20 times faster than the Galaxy Note 8. This type of performance will depend entirely on the application itself though, and right now we have yet to see something that truly takes advantage of this dedicated hardware. Huawei is focusing its AI capabilities to ensure speedy performance and to improve its camera experience, with the phone being able to recognize subjects and tweak image quality to create the best shot for each scenario. With the launch of the Mate 10 and the Mate 10 Pro, the company is sticking to their beliefs that they need to focus on the high-end, premium sector of the smartphone market. So when creating these two new devices they said the team worked on design and performance the most. Compared to the iPhone 8 Plus, the Mate 10 and Mate 10 Pro have a larger screen built inside a compact design. So here are the specs of the two new smartphones announced today… 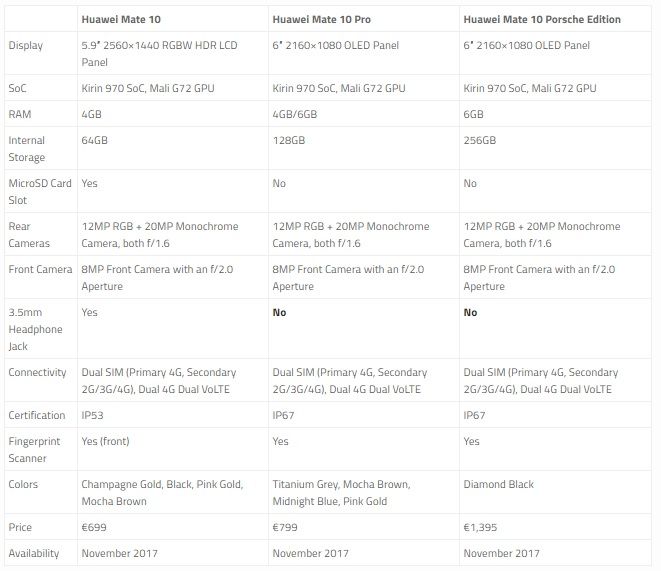 So as you can see, Huawei is doing a ton of work to put its best foot forward when it comes to both design and performance. They’re putting a lot of focus on comparing the Mate 10 and the Mate 10 Pro with other smartphones on the market today. This was done with the NPU in the Kirin 970 versus the Neural Engine that Apple offers. They took time to compare the screen ratio of these new phones to what Apple offers in the iPhone 8 Plus, showing every dimension and improvement. They even spoke about how they could fit a 4,000mAh capacity battery while the iPhone X has a much smaller one — Huawei sure loves battery capacity.

It’s true that the regular Mate 10 has an LCD panel while the Mate 10 Pro has an OLED panel. However, they feel the new RGBW panel in the Mate 10 does its best to keep the battery usage low with backlight power savings of up to 14% compared to regular RGB displays, and the panel is oddly of higher resolution to boot. Samsung has their Infinity Display for the curved screen technology that they have been working on while Huawei is calling their edge to edge display tech “FullView”.  The Mate 10 Pro’s OLED panel is FHD+ 2:1 with HDR support, and a 70000:1 contrast ratio, and it’s targeting NTSC for color saturation. The RGBW panel on the Mate 10 is slightly smaller at 5.9″ instead of 6″, but boasts of a higher resolution (2560×1440) in a traditional 16:9 aspect ratio, and it can achieve 730 nits of brightness for outdoor visibility.

Along with packing these phones with tons of hardware, Huawei  has also done a lot of work to improve the software used in them. They will ship with EMUI 8.0 and they’re betting on improved performance thanks to AI optimizations over time as well as general speed improvements from the hardware. The company says this will increase system response time by up to 60% and smoothness of operation by up to 50%, as it learns your habits and usage patterns and adjusts various performance-related parameters to ensure a fast experience. Once more the company is trying to ensure performance won’t degrade over time: Richard Yu called this philosophy “start fast, stay fast” and showed us a comparison of how the Huawei P10 Plus only saw 10.6% performance degradation over time versus the S7’s 195% decline in application response time (however, no more specifics were given). Not only will this help to improve performance, but it also helps tune the device for improved battery life as well.

The batteries in the new Huawei Mate 10 series are certified by TUV Rheinland, one of the companies that helped Samsung when assessing the Note 7’s battery faults, and they’re the first to include a certified fast charger from them as well. Huawei’s SuperCharge fast charging technology, which we found to be excellent in the past, enables the Mate 10 and Mate 10 Pro to charge 50% faster than the iPhone 8 Plus with promises of filling the battery to 58% on a 30 minute charge. While there are some benefits to wireless charging for some, Huawei feels their SuperCharge technology charging our phones four times as fast is ultimately better for the customer.

The software has a feature that will let you use your device as a virtual touchpad and keyboard for a PC, and they will also support Android’s neural network API to let developers make full use of hardware acceleration for machine learning applications. All of the devices will be shipping with Android 8.0 Oreo and they’ll be the first in a wave of devices that support Google’s zero-touch provision. This enables them to offer enhanced enterprise security and efficiency thanks to global enterprise mobile management vendor partnerships.

The Huawei Mate 10 will be available in November 2017 with a starting price of €699 for 4GB+64GB of storage, while the Mate 10 Pro will cost €799 for the 6GB+128GB variant. Finally, the Porsche Design Mate 10 will cost €1395 — while seemingly absurdly expensive, Huawei did indicate that their previous Porsche model sold out, so there’s definitely demand for such an exclusive phone. As always, stay tuned to the XDA Portal for more coverage and in-depth analysis once we get our hands on these devices!