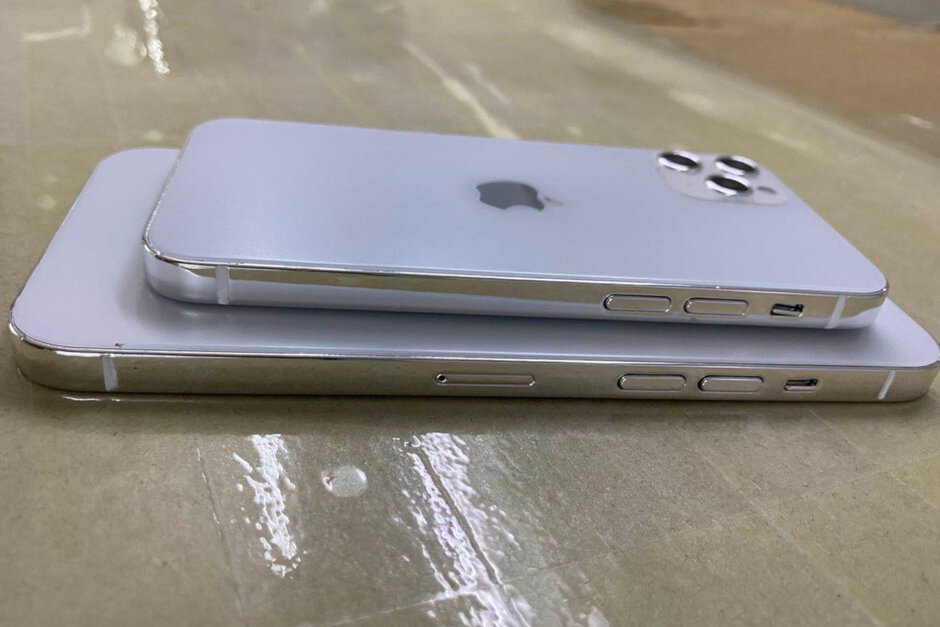 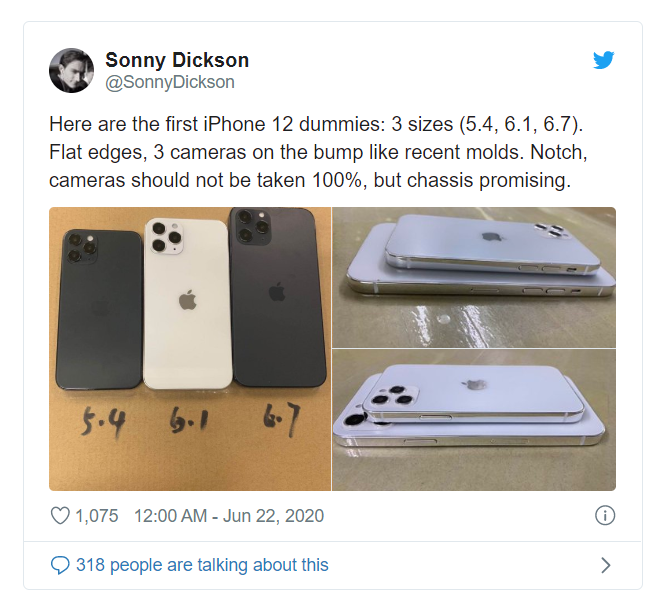 The dummies show off the flat sides that the new iPhones will reportedly sport giving the 2020 models a throwback look that resembles the iPhone 4. With the edge-to-edge screen and the notch, the iPhone 12 line will have a higher screen-to-body ratio than the iPhone 4 giving the upcoming handsets a sleeker and more modern look. We should point out that Dickson himself isn’t 100% sure about the rear cameras and the size and look of the notch, but is confident about the chassis of the dummy models

WWDC 2020 is about to kick off in less than 24 hours and while Apple is expected to make big waves this week, the iPhones that some might be waiting for are still months away. Of course, if Apple is to meet its self-imposed deadlines, the design of its first batch of 5G iPhones should now be set in stone. Or in this case, metal and plastic models that will give accessory makers as well as the public a preview of what to expect come September’s event.

We’ve already seen the molds that would be used to print out dummy models and now we’re seeing those dummies courtesy of Sonny Dickson. The leaker warns that the notches (not seen here) and cameras might not be their final design which is probably not relevant for these dummies anyway. The molds, after all, are used to inform case makers about the external design of the phone.

To that extent, the chassis that we’re seeing now may be close to final, including the size and shape of the camera bumps which are thankfully still not obscenely thick. The dummies also give the three sizes of the four phones (two 6.1-inch models in the middle) to get a better idea of how they will compare with each other, at least by their appearance.

The locations of the buttons and holes at the very flat edges should also be final, given those are critical parts of a case’s design. The show the volume rocker buttons on the same left (facing the screen) edge as the ringer switch and SIM card tray on the larger iPhone 12 while the opposite edge gets the lone power button. Curiously, there is also another indentation on that side on the 6.7-inch iPhone, perhaps for the mmWave 5G antenna that’s unique to it.

That leaves just the question of the cameras, which some point out are depicted wrong in dummies. Only the largest of the four iPhones is expected to have three cameras, though it isn’t yet certain whether it will indeed be a LIDAR sensor similar to this year’s iPad Pro.

All four phones should be powered by the 5nm A14 Bionic chipset with 15 billion transistors in each chip. The A13 Bionic, the component currently used by Apple on the iPhone 11 series, is produced by TSMC using its 7nm process and contains 8.5 billion transistors. The more transistors inside a chip, the more powerful and energy-efficient they are. The two Pro models should feature the ProMotion display with a 120Hz refresh rate. This means that the screen will update 120 times in a second delivering smoother scrolling and enhanced video game animation.
The Pro models are also believed to come with 50% more memory (6GB of LPDDR5 RAM) than the standard handsets and for the first time, the basic configuration of the iPhone will include 128GB of storage. Rumors pertaining to the rear cameras have been unsettled with some tipsters calling for the inclusion of the time-of-flight based LiDAR depth sensor on all four phones. Others point to a recently leaked CAD image to prove that only the iPhone 12 Pro Max will offer the additional sensor. Introduced on the 2020 iPad Pro tablets, the LiDAR sensor computes the time it takes for an infrared beam to bounce off the subject and return to the sensor. Armed with this data, the sensor can offer users enhanced AR capabilities and improved bokeh blurs on portrait shots.
The new iPhones will supposedly feature the Qualcomm Snapdragon X60 5G modem; the chip supports both sub-6GHz and mmWave 5G signals. However, some analysts believe that only the Pro models will work with the faster 5G mmWave signals. This means that T-Mobile subscribers who want a 5G iPhone this year might be limited to buying the lower-priced standard models. That’s because only a small part of T-Mobile’s 5G network is using mmWave spectrum at this time. And only a small part of the country can use Verizon’s 5G network right now. While there will always be consumers who have to own the latest and greatest iPhone models, and faster 5G speeds are impressive, not too many 5G iPhone users will get the opportunity to download a video in the blink of an eye this year.
The combination of 5G and the ProMotion 120Hz refresh rate is sure to be a battery killer. Apple will reportedly hike the battery capacities on the 2020 iPhones with the iPhone 12 Pro Max rumored to sport a 4400mAh battery. That would be a 10.8% hike over the battery in the iPhone 11 Pro Max; the latter has already delighted users with its remarkable longevity.