There’s this thing about the Galaxy Note 5 that has steadily been gaining steam online today, for some it’s a design flaw and for others it’s just something that has been blown way out of proportion. It was reported earlier today that if you were to insert the S Pen backwards into the Galaxy Note 5 and yank it free, which you would obviously do because you won’t carry around the device like that with the pointy end sticking out, this would end up damaging the mechanism that automatically detects whether the S Pen is attached or detached from the device.

Samsung was asked to comment on the matter and maybe provide a solution, and it has come up with a very simple solution. It provided the following statement to the BBC:

We highly recommend our Galaxy Note 5 users follow the instructions in the user guide to ensure they do not experience such an unexpected scenario caused by reinserting the S-Pen in the other way around.

Yes that’s precisely what the company is saying, read the user manual, it’s that thing you immediately chuck to the side the moment you unbox your new handset. The user manual does have a warning which clearly states that inserting the S Pen the wrong way can cause it to become stuck which will ultimately cause damage to the pen and the phone. From the looks of it Samsung doesn’t have any plans of fixing this at a hardware level, even when the case can be made that it’s more than possible for people who have read the user manual to insert the S Pen in the wrong way particularly when they’re preoccupied or just not paying attention to the matter at hand. 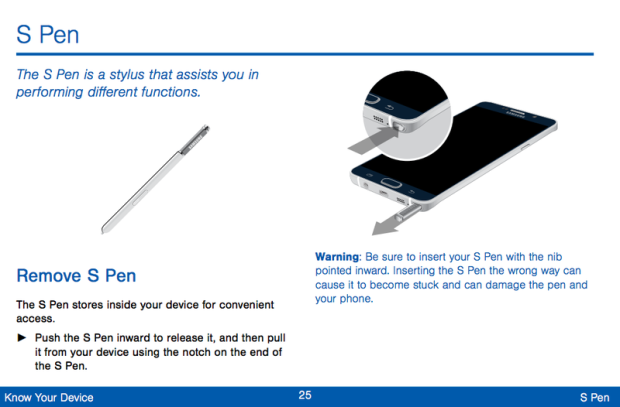