Now, with the latest edition in this series launched in August, the Galaxy Note5 boasts more ways to conveniently take notes whenever you need and then share them with your friends and colleagues. With just a few clicks and strokes, the S Pen lets you do more than ever and do it more easily.

In addition to our previous article about the notable new features, the S Pen has gotten a significant upgrade, making it more responsive, accurate and fun to use. Let’s take a look at how the S Pen has grown over the years, as well as a couple of its most interesting new features. 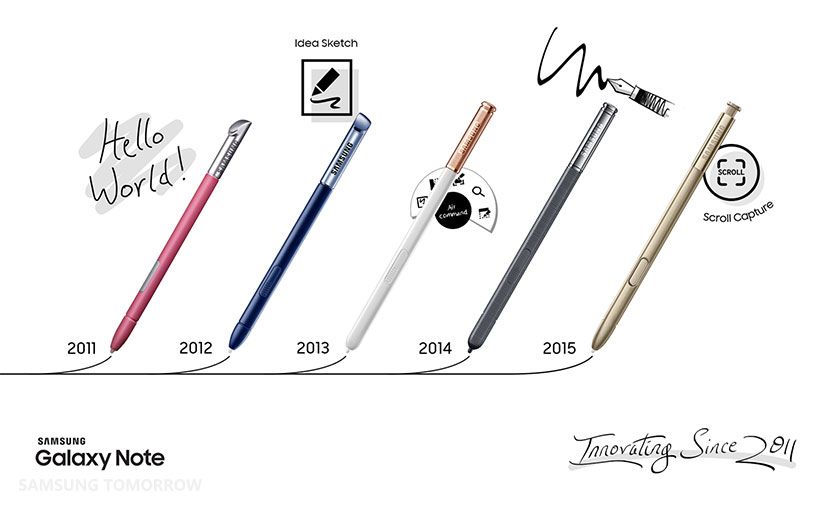 The Growth of the S Pen

The most defining part of the Galaxy Note series is the S Pen, and the new, metallic version of the S Pen is the most elegant and useful yet. With a satisfying clicking motion, just like a retractable ink pen, the S Pen has the most natural-feeling writing experience.

For instance, the reporting rate is 80 percent higher than the previous S Pen, making the S Pen incredibly responsive to your every touch. The Galaxy Note5 is remarkably precise, recognizing 240 data points each second, far more than the 60 points per second that a finger typically can create. In addition, the new S Pen has an incredibly low latency period—just 74 milliseconds, down from 93 milliseconds with the previous model. Adding up all these improvements means far more control and nuance to your writing, just like a real pen and paper.

Using the S Pen is a simpler, two-step process: just remove the S Pen from the phone, which automatically brings up the Air Command menu, then select a feature.

How often have you been talking to a friend or colleague, and suddenly found yourself needing to write down some key information right away? With the Galaxy Note5, you no longer have to spend time hunting for a pen and paper, or even take the time to turn your phone on, log on and fire up an app.

With Screen Off Memo, you can take notes right onto your smartphone’s screen, without even signing in. Just eject your S Pen and start writing right on the dark screen, then save your message for later once you are done.

It’s easy to turn on the Screen Off Memo feature:

That’s all there is to it. Now you can take notes you want while on the go, anytime and anywhere.

Another incredibly useful feature with the new Galaxy Note5 is how easy it is to share notes with your friends. Now it’s a snap, when looking at a website or any content, to capture part of the image, write your comments and share the new image with everyone.

There’s plenty more you can do with your S Pen, including the new Scroll Capture feature that lets you take one continuous image of a long website, so check out these tips, too. Along with the Galaxy Note5 other upgraded features—like improved SideSync to connect your smartphone to your PC, 4GB of RAM for faster multitasking and a slimmer, better design—the Galaxy Note5 and S Pen together help you get more done, faster, in a style that’s all your own.

There’s this thing about the Galaxy Note 5 that has steadily been gaining steam online today, for some it’s a design flaw and for others it’s just something that has been blown way out of proportion. It was reported earlier today that if you were to insert the S Pen backwards into the Galaxy Note 5 and yank it free, which you would obviously do because you won’t carry around the device like that with the pointy end sticking out, this would end up damaging the mechanism that automatically detects whether the S Pen is attached or detached from the device.

Samsung was asked to comment on the matter and maybe provide a solution, and it has come up with a very simple solution. It provided the following statement to the BBC:

We highly recommend our Galaxy Note 5 users follow the instructions in the user guide to ensure they do not experience such an unexpected scenario caused by reinserting the S-Pen in the other way around.

Yes that’s precisely what the company is saying, read the user manual, it’s that thing you immediately chuck to the side the moment you unbox your new handset. The user manual does have a warning which clearly states that inserting the S Pen the wrong way can cause it to become stuck which will ultimately cause damage to the pen and the phone. From the looks of it Samsung doesn’t have any plans of fixing this at a hardware level, even when the case can be made that it’s more than possible for people who have read the user manual to insert the S Pen in the wrong way particularly when they’re preoccupied or just not paying attention to the matter at hand.

The newly announced Samsung flagship devices, the Galaxy S6 edge+ and the Galaxy Note5, were engineered to be as power-efficient as they are beautifully designed. Each has a 5.7-inch screen optimized to display an even more advanced multimedia UX and productivity capabilities. To enjoy these devices to the fullest, each are equipped with better batteries with faster charging speeds.

Building upon the fast wired-charging of the Galaxy S6 and the Galaxy S6 edge, Samsung improved the efficiency even more. Samsung created AFC (Adaptive Fast Charging), which speeds up wired charging and lets the battery charger communicate with the smartphone. If the charger finds a device compatible with AFC, it will start recharging the phone’s battery using higher voltage.

Not only is the charger discharging more power at a faster speed, the device battery receives the power properly and stores it cell by cell, to further accelerate the battery charging.

Both products have built-in wireless technology, just as the Galaxy S6 and the Galaxy S6 edge do, freeing users from the need to purchase separate wireless charging battery covers or individual connectors. Additionally, they allow you to enjoy the experience of wireless charging without worrying about compatibility. They support both WPC (Wireless Power Consortium) and PMA (Power Matters Alliance) certified standards, the two most widely used wireless power standards around the world.

Samsung is the first to make devices compatible with both WPC and PMA charging pads. The innovative advances made it possible in the two latest large-screen products, even with a thinner body.

Built-in wireless charging in thin devices became possible only through Samsung’s relentless efforts to continue pushing the boundaries of technology. Because WPC and PMA have different frequency bandwidths, Samsung’s developers had to find a way to satisfy both, with high efficiency. To accomplish this, they designed a new integrated IC for wireless charging, combining two different materials for magnetic shielding required in the wireless charging components to enable hybrid use.

Users have the ability to manage and control their battery usage in a simple and convenient way through Smart Manager, introduced with the release of the Galaxy S6 and the Galaxy S6 edge. With this app, users can see which running apps are consuming the most power.

Samsung continues to lead mobile innovation by introducing technologies that are accessible and meaningful to all mobile users.