Amidst a sea of increasingly bezel-less smartphones, ZTE is looking to differentiate itself from its competitors. The company’s flagship smartphone of 2017 may not pack the top-tier hardware specifications we’re seeing in the latest flagships from Samsung, OnePlus, or Google but it has one particular hardware feature to make up for it—a second screen. Indeed, ZTE is attempting to do what Kyocera failed to do with its Echo device back in 2011. The company is hoping to beat Samsung to the market with the first truly functional, foldable smartphone. Can the ZTE Axon M live up to expectations? 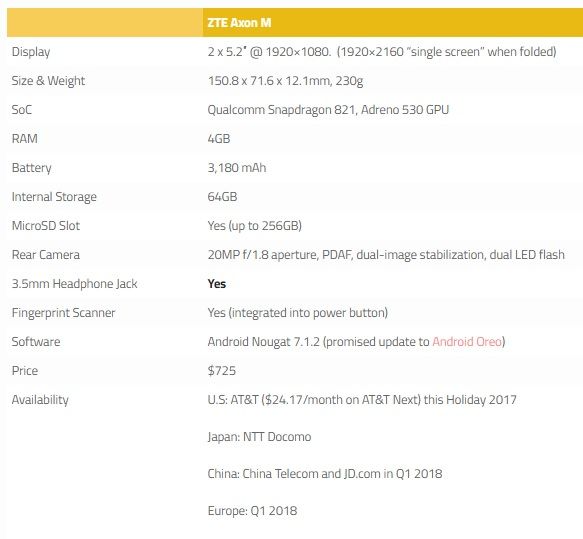 Before we talk about the Axon M, we need to talk about its predecessor, the Kyocera Echo. The Echo was released far ahead of its time when Android was still in its pre-Holo days. Not only was the ecosystem inadequate for the Echo (the device had a “tablet mode” before Google started its tablet push with Android Honeycomb), but it was clunky to use.

When folded together, the Echo measured approximately 17mm in depth which is far thicker than the average device today. Furthermore, the large bezels contributed to the feeling that the device was huge (keep in mind that 4.7″ was large for a smartphone back then). For these reasons and some more we haven’t listed, the Kyocera Echo failed to capture the market and the foldable smartphone concept died with it. But this is 2017 where the industry has been improving on every aspect of smartphones down to nearly eliminating bezels in some cases. Thus, the time is ripe for the foldable smartphone concept to be revived, and it seems that ZTE is the first to take a crack at it. Meet the ZTE Axon M. With a strong hinge connecting two regular smartphone displays and software trickery via Android’s splitscreen functionality plus some home-baked tricks, Axon is pushing a flexible design ahead of the advent of foldable and bendable smartphones in the coming years.

Both of the Axon M’s displays measure 5.2 inches in their diagonal, both featuring the traditional 16:9 aspect ratio as well and they are protected by Gorilla Glass 5. Above the “back” display you’ll see the camera – a single camera for both selfies and regular pictures –  and the device closes like a flip phone giving you a screen on each side. At 1080p resolution, they aren’t the sharpest displays out there, but the relatively small size of each pushes the pixel density to 426 ppi, and you’ll end up seeing twice as many pixels as in other FHD displays once you enter the signature modes that make this device so special.

There are three modes that the Axon M can be used in: Extended Mode, Dual Mode, and Mirror Mode. In Extended Mode, applications can be stretched across both displays to fill up the combined screen area. In Dual Mode, you can run two different applications at the same time on each display. Finally, in Mirror Mode the Axon M can mirror the same app across both displays. On stage, ZTE demonstrated a few uses cases of each mode. For Extended Mode, the company showed a user scrolling through their Facebook feed that stretched into the other display. The company stressed how this results in reducing the amount of overall scrolling that a user needs to do. In Dual Mode, ZTE showed off watching a video while also sending a tweet at the same time (and also spoiled a certain Game of Thrones episode in the process). Finally, in Mirror Mode the company showed off a chess game being played between two players on opposite ends. They attempted to show off Google Duo video conferencing, though the person who was being called never picked up so we didn’t get to see that in action.

The device launches with Android Nougat 7.1.2 on board, but ZTE is promising a prompt update to the latest Android Oreo. They also promise regular software updates for the device.

Developers looking to optimize their applications can head to developer.ztedevice.com to learn more, though ZTE states that most applications will not need to be optimized for use on the Axon M, and they made sure that the top hundred Play Store applications work without a hitch on this device as well.

Powering the device is Qualcomm’s Snapdragon 821 SoC with 4GBs of RAM. Though the Snapdragon 821 was last year’s premiere SoC, it’s by no means inadequate. Some of the fastest phones out there including the first generation Google Pixel and Pixel XL are based on this processor, and at the same top clockspeeds of 2.15GHz. By itself, the Snapdragon 821 shouldn’t pose a problem in terms of performance, though some of you may understandably be disappointed by the lack of the latest offering from Qualcomm.

Even with the Snapdragon 821 SoC, the ZTE Axon M isn’t guaranteed to be a smooth performer. The Samsung Galaxy Note 7 delivered embarrassing real-world performance when compared to its contemporaries, after all, though Samsung did clean up its act with its Galaxy Note 8. ZTE doesn’t have room for mistakes, however, since I can’t see users giving dual screen smartphones a second chance if this generation is inadequate. Do keep in mind that the phone is essentially powering up two FHD displays, so we’ll have to run it through its paces in order to see just how well it can keep up and perform in the real world.

It’s been 6 years since the Kyocera Echo, but this time we hope it’ll only be one year for the next Axon M. We’ll let you know how the Axon M performs in our hands-on review!

ZTE has embedded a 3,180 mAh capacity battery into its dual screen Axon M. Whether this will be enough for the Snapdragon 821 and two TFT LCD displays is something we’ll have to find out through day to day usage in the coming weeks.

The company states that the phone will retail for $725 exclusively at AT&T, and for $24.17/month on AT&T Next. The company has also announced a partnership with NTT Docomo in Japan. In China, the M will be available through China Telecom and JD.com in Q1 2018. Finally, the company states the M will launch in Europe during Q1 2018, but no further information was given about which countries it will be available in.

Axon Passport M program will come for free for all purchases of the Axon M.