Xiaomi Mi Mix 2 review: A top notch phone, if you can buy one 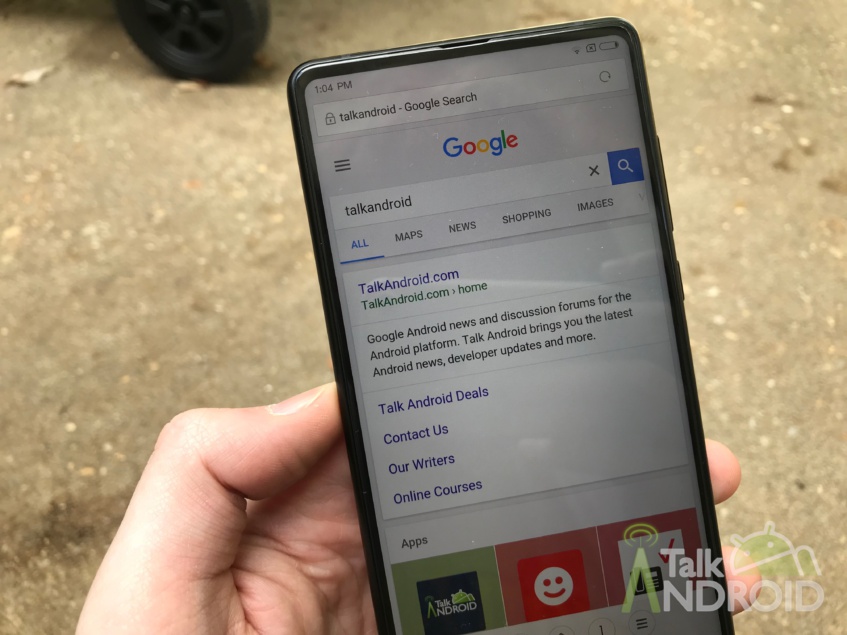 Xiaomi has always been nearly universally praised for their smartphone hardware and pricing, but also pretty commonly panned for how difficult they are to buy if you aren’t in China. We’ve been hearing several rumors that the company is eventually planning on branching out into different countries, but here we are with the Mi Mix 2 that’s taking shots at top-of-the-line flagships with an aggressive price tag and it’s still tough to find across the globe.

Availability aside, though, the Mi Mix 2 has some screaming specs, and you can always import it if you want it badly enough. Is it a worthwhile purchase? Let’s find out.

The Xiaomi Mi Mix 2 boasts a sleek glass design with razor-thin bezels, and it pulls all of this off without any fancy curved screens or edges. It has an over 80% screen-to-body ratio, and I literally can’t imagine how they could top this in future iterations. It’s all screen.

The only real bezel on the phone is at the bottom below the screen, and that’s actually where you’ll find the front-facing camera. Since there’s no way to put it in the top of the device without pulling an Essential or Apple and notching the display, Xiaomi had to make it fit where it works. And yeah, it’s awkward.

On the right side of the device, you’ll find the power and volume buttons, with the dual-SIM tray on the left side. The bottom houses two downward firing speakers and a USB type-C port, and no headphone jack. Sorry, guys.

The back of the phone is where you’ll find a single camera, so no dual-camera fancy stuff here. There’s an LED flash, too, and a fingerprint scanner below the camera. I still don’t like rear fingerprint scanners, and I don’t think you can convince me otherwise, but for anyone that likes the Nexus/Pixel style of biometric authentication, you’ll be pleased.

The phone is, again, made of glass, which is good and bad. It feels like a really sturdy, really premium phone, which is great, but it is pretty heavy and probably won’t survive too many drops or spills without a protective case. Xiaomi bundles a small case in here, but I’m not sure it will do much if you’re rough on phones.

Overall, it feels every bit as premium as other flagship devices. It’s not grippy, and the back is a total fingerprint magnet, both of which are major drawbacks, but it just feels so great to hold. Form over function, I guess.

The Xiaomi Mi Mix 2 uses a Snapdragon 835 paired with 6GB of RAM, which is still top of the line even in late 2017. It’s the same processor that you’ll get in the Google Pixel, and there’s more RAM than in Google’s offerings, too. Needless to say, performance is just fine.

We’re at the point of diminishing returns with newer processors, which is a conversation in and of itself, but that means you’re getting the absolute best performance possible out of this phone and it likely won’t struggle for years to come. Games look fantastic, the UI is incredibly smooth, and multitasking is a breeze with very few reloads.

The screen itself is pretty good, although that’s probably the only non-cutting edge feature on the entire phone. It’s a full HD resolution LCD panel that holds up, but it won’t wow you quite like a Samsung AMOLED will. It would’ve been nice to see any kind of LED here instead of an LCD, but hey, it’s still not bad.

I’m also personally okay with 1080p screens because of the better battery life, but if you demand ultra crisp resolutions on your phones, you won’t find that here.

Sound quality on the Mi Mix 2 is just alright, which is a slight disappointment for having dual stereo speakers. They’re loud and serviceable for watching videos and music, but you certainly won’t be filling up a room with sound or replacing a surround sound system on them.

It’s not always common to see phones with a high-end Snapdragon chip outperforming in the battery department, but Xiaomi delivers here. That probably has something to do with the full HD screen since the processor doesn’t have to push tons and tons of pixels, and that’s a trade-off I’m always willing to make.

You’ll easily go a full day on a single charge of the Mi Mix 2’s 3400mAh battery, and it features quick charge so you can juice back up very quickly in case you do run low. I was easily getting a full day out of the phone, and I could see it stretching into part of a second day.

Xiaomi uses one of the most heavily customized Android skins on the market in MIUI, and despite running on an Android base, it deviates very heavily from your traditional Android device. Other OEMs, specifically many of the Chinese ones, tweak things similarly to MIUI, but no one does as thorough of a job as Xiaomi.

As a side note, there are two versions of Xiaomi’s MIUI software; one with Google apps, which is considered their global software, and the default software that has no trace of Google whatsoever. Out of the box from China, the Mi Mix 2 has no Play Services, no Play Store, no Google apps, and side loading them won’t work without a ton of headaches due to missing framework pieces. Xiaomi does offer a global ROM that restores these Google features and translates much of the interface to other languages, which is pretty much the only way it’ll be pleasant to use outside of China. Keep that in mind.

While the look may not be for everyone, you can’t deny that Xiaomi is consistent. Pretty much everything throughout the OS is themed, skinned, and rebuilt for MIUI, from the utility apps to its own software updater. Xiaomi has its own virtual assistant, weather service, app store, smart home hub, social media network, and more. It’s crazy.

But if you’re a big fan of Google’s Material Design and other western design elements, you absolutely will not find that here. It’s a Chinese interface through and through, with a ton of white backgrounds, small text, pastel colors, and squared edges. It’ll give you iOS vibes more often than not, especially on the home screen where you just get an array of square icons with no app drawer.

It works really well, though. For the heavy layer of customization, MIUI doesn’t seem to drag on performance much at all, and it’s one of the most in-depth skins that you’ll find on an Android device. Things can get a little jarring when you hop between MIUI apps and downloaded apps that try to stick to Google’s design, but overall it was a very pleasant, albeit different, experience.

Surprisingly, the OS and all of the extra apps (including a full set of Microsoft Office apps) take up way less room than you’d expect. The 64GB model has 55GB of usable space, and out of the box about 52GB is available to the user.

For better or worse, there’s not much to talk about with the camera on the Mi Mix 2. It’s not bad, don’t get me wrong. It’s perfectly good, almost great, but not spectacular.

It takes great outdoor shots, like most cameras in 2017. If the lighting is good, you shouldn’t struggle with image quality whatsoever.

Even indoors, it still holds up pretty well. It could be better, and we’ve definitely seen better on some cameras that are close in quality to the Mi Mix 2, but I was never disappointed with what I got out of the device.

The interface is pretty simple, too, mirroring the minimalist design of the rest of MIUI. You’ll get a manual mode to make some tweaks and a few filters to slap on your photos, but for the most part, you just point and shoot.

It won’t be replacing your DSLR and won’t win a shootout against a Pixel, but for what you pay, it’s great.

Xiaomi phones are extremely popular around the globe, and with good reason. The design, build quality, and performance are all top notch, and great battery life and a good camera back the rest of the phone up.

However, the software is going to be pretty foreign to anyone that’s not used to it, especially in a market like the US where Xiaomi devices are not readily available and that kind of design language is much less prevalent thanks to Apple and Samsung’s continued dominance. As someone who frequently uses phones from North America designed for North America, I can understand Xiaomi’s hesitation to jump headfirst into the market here; this phone felt incredibly different and sometimes uncomfortable to use.

There’s nothing bad here, so don’t take that the wrong way. But when you’re used to Samsung and Google’s way of handling Android, Xiaomi’s skin almost feels like a completely different operating system. I’m still not 100% used to it after a few weeks of playing with it, and I think most people in my situation would feel the same.

With all of that in mind, this is still an absolutely fantastic phone. If you know you’ll like the software and don’t mind flashing the global ROM on it, there’s plenty to love with the Mi Mix 2, and since this device has support for pretty much every market in the world, you can buy it with confidence and know that it’ll work in your location.