After nearly two years of no major movement in its smart speaker product line, which itself came years late to the market, Apple has finally announced a half-successor to the HomePod. The HomePod mini isn’t due to ship until next month but isn’t stopping Apple from pushing out a new version of its HomePod software that prepares for its arrival. Software version 14.1, however, which lines up with iOS 14.1 and iPadOS 14.1, isn’t just about the mini speaker but also introduces features that make all HomePods, and Siri, smarter.

With a $99 price tag, the HomePod mini aims squarely at the Amazon Echo Dot and Google Nest Mini markets, leaving people fewer excuses not to sink their teeth into Apple’s smart home ecosystem. Of course, this small smart speaker makes more sense if you’re already hooked into Apple’s world anyway or if you find its features just as or even more helpful than the competition.

The HomePod’s features haven’t exactly been at the top of the list when it comes to smart speakers but that list has been consistently growing while, some will argue, respect users’ privacy the way only Apple knows how. With Software version 14.1, for example, HomePod owners and future HomePod mini owners will be able to use a set of speakers as an intercom system throughout the house. You’ll also be able to finally select your preferred music to wake up to in the alarm settings.

Siri is also getting an update in this iteration, like being able to stop alarms and timers across all HomePods in the same network. Web searches can now be started on a HomePad then sent to an iPhone to make a more seamless and convenient transition.

As with previous HomePod software updates, the firmware is automatically installed on the speaker without requiring user intervention. It can also be triggered manually from the iOS app, of course, if you’re are that excited for a smarter and more useful smart speaker.

Alongside iOS and iPadOS 14.1, Apple today released new 14.1 software for the HomePod, which includes a number of new updates such as support for the Intercom feature that allows you to speak to anyone in the home on iPhone, iPad, ‌HomePod‌, and more.

The update also introduces support for the HomePod mini that’s launching in November and it adds new Siri features. ‌Siri‌ is able to stop alarms, timers, and media across ‌HomePod‌ speakers, and web search requests from ‌HomePod‌ can be sent from ‌HomePod‌ to the ‌iPhone‌.

There’s also an option to add music to alarms to wake up to a favorite song or playlist from Apple Music, and there are multiple reliability improvements.

‌Siri‌
– ‌Siri‌ suggestions appear in Maps when you ask ‌HomePod‌ for information about a location
– Web search requests to ‌HomePod‌ can be sent from ‌HomePod‌ to your ‌iPhone‌
– ‌Siri‌ can now stop alarms, timers, and media across ‌HomePod‌ speakers
– Voice recognition support for Podcasts for multiple users in the home

Other improvements and fixes
– Add music to your alarms and wake up to your personal song, playlist, or radio station from ‌Apple Music‌
– Fixes an issue where stereo pairs can sometimes play out of sync
– Improves reliability when using ‌Siri‌ to control multiple speakers
– Optimizes ‌Siri‌ performance 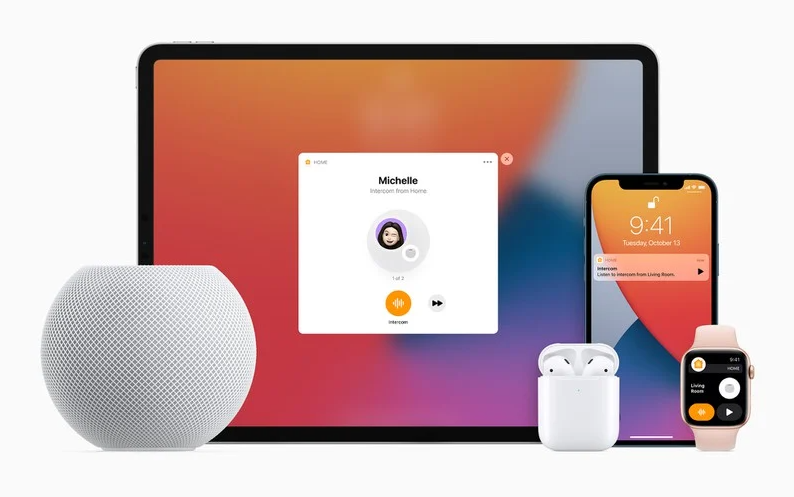