The Huawei Mate 30 Pro is a beautiful phone that comes with all the features you’d want from a handset in 2019, but it doesn’t sport Google’s core services, such as the Google Play Store and that severely hampers what it can do.

The new Huawei Mate 30 series has just debuted, and there’s no denying the Mate 30 Pro is the shining jewel in the Chinese smartphone brand’s crown.

It features top-end specs, including what looks to be a massively improved camera array in a variety of ways, all packed into a sleek design.

The problem is, it’s not clear in which countries you’ll be able to buy the new phone. Google revoked Huawei’s license to use all of Android’s services on future devices earlier this year, after an executive order in the US by President Trump.

That has had a knock-on effect which means Huawei is unable to offer Google services on its devices. So you won’t be able to access Gmail, YouTube or even the Google Play Store easily on this phone – and Huawei apparently believes this will limit the appeal of its device in certain markets.

That aside, we’ve taken a look at the technology on offer from Huawei at the company’s launch event in Munich, Germany. So what does the Mate 30 Pro have to offer?

As we’ve already noted, it’s unclear if you’ll be able to buy the Huawei Mate 30 Pro in your home country. There’s always the chance that you’ll be able to import the handset if you can’t buy it through domestic outlets, but getting Google’s services onto the phone is likely to be a complicated process. 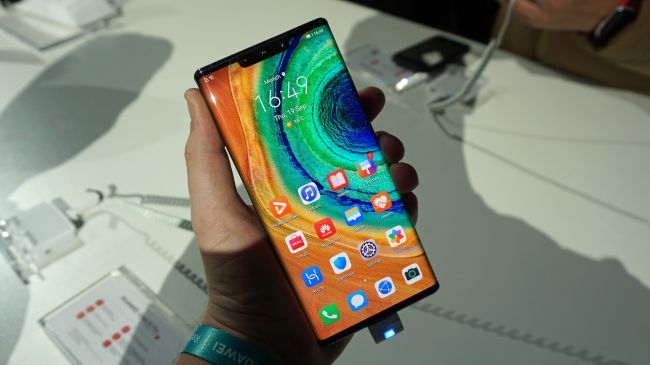 The Huawei Mate 30 Pro feels like a premium smartphone when you first pick it up, and that’s mostly because of its curved display. The screen curves stylishly around the sides of the handset, giving the phone a unique look that reminds us of the Samsung Galaxy S7 Edge.

The 6.53-inch display looks great at first glance, and the quality of the screen seemed to be strong in our initial testing.

The back of the phone is made of glass, and comes in Green, Silver, Purple and Black finishes. There’s also a leather version of the phone, which is made of a vegan-friendly material rather than traditional leather, which comes in Orange or Forest Green.

It’s currently unclear if the leather version will cost more than other variants of the Mate 30 Pro.

The phone is IP68 water and dust resistant, so it’ll be able to take a dip in water without being ruined, and the edges of the phone are made of metal that feels premium. 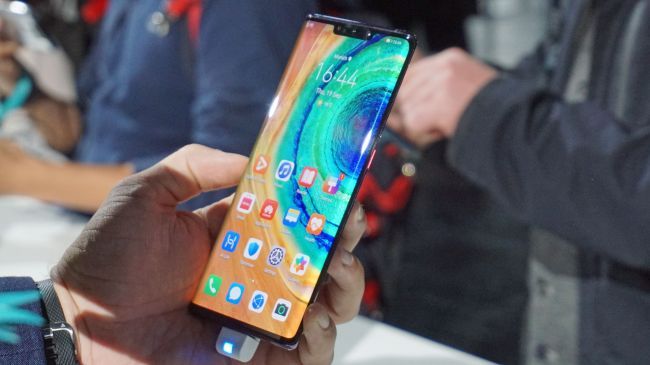 The Huawei Mate 30 Pro is running the latest Android 10 software, and it comes with Huawei’s own overlay called EMUI10.

In our short hands-on time with the phone this seemed to work smoothly, but it’s important to note that Huawei doesn’t have access to Google’s services on this phone.

That severely limits what the phone is capable of doing, as you’ll be limited to apps provided by Huawei on the device by default, or those offered through Huawei’s own app store.

It’s currently unclear how much will be missing from the device, but it’ll be a big deal for a lot of people outside of China.

In terms of spec, the Huawei Mate 30 Pro is sporting some of the very best, including the recently launched HiSilicon Kirin 990 chipset, which is set to sport enough power to keep up with the top-end Snapdragon and Exynos chipsets from its competitors.

The phone comes with 8GB of RAM and 256GB of storage. The standard version of the phone is limited to 4G connectivity – you’ll have to spend a little extra to get the 5G version. 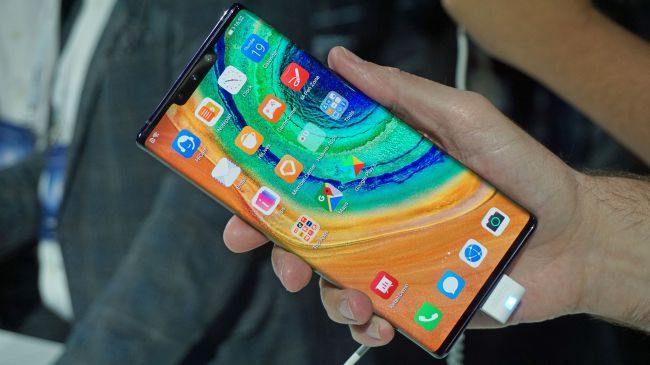 All of that makes for a strong camera setup on paper, but we’ve been unable to properly test the camera in our hands-on time so far – we’ll be sure to push the Mate 30 Pro to its limits here and in other areas for our full review.

The front camera on the phone has a whopping 32MP sensor, alongside a time of flight depth sensor.

We’ve yet to be able to test the battery life on the Huawei Mate 30 Pro, but we’d expect it to be strong with its 4500mAh cell inside. There’s fast-charging technology on offer, plus fast wireless charging. 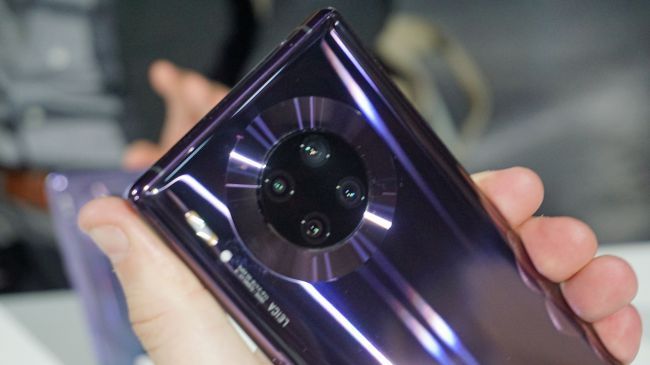 The Huawei Mate 30 Pro looks to be the best phone the company has produced to date, with specs that enable it to go toe to toe with the top phones from Samsung, Apple and others.

Without Google’s core services, however, the Mate 30 Pro is unlikely to impress many outside of China, and it’s going to be hard to recommend without the Google Play Store on board.