Release Your Inner DJ with the Samsung Soundcamp App

From the dawn of electronic music right up to the current digital DJing age of today, artists around the world have continuously sought out the best tools and equipment to fine-tune their skills and produce inventive tracks to excite music lovers everywhere. Samsung’s Soundcamp makes achieving these goals not only possible, but easy, too. And with the app’s new features and compatible third party apps, musicians—both amateurs and professionals—can play, compose, mix and “spin” right from the screen of their Samsung smart devices without any additional equipment.

Soundcamp, a mobile DAW and MIDI sequencer application, functions as an easy-to-use studio recording system that gives musicians access to an ensemble of built-in virtual instruments, including keyboards and drums, as well as an audio recorder equipped with sound effects. The app’s plug-in style, open-concept structure also gives users the option to connect to and record with various third-party music apps.

Tracks are then edited from the mobile workstation’s soundboard. Soundcamp’s well-organized and straightforward Multitrack View lets users record up to eight tracks in MIDI or stereo audio. In other words, they can add five additional components, such as Unique’s synth patches, even after recording their tunes on the drums, classic guitar and keyboard, to create a richer sound. For more advanced users, MIDI Editor View allows for PC-level MIDI editing. Likewise, Soundcamp’s Mixer View resembles the mixing consoles used in recording studios, so users can easily combine, route and change the level and dynamics of audio signals from one screen. 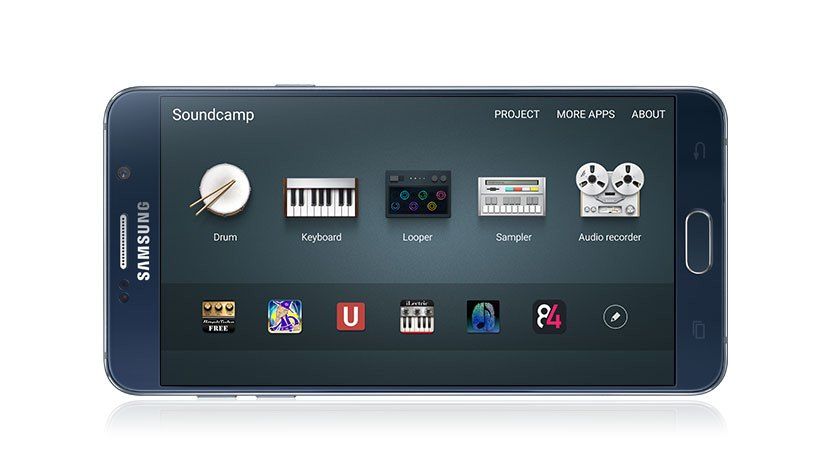 New Features for a New Sound

Nowadays, more and more people are opting to create their own music and DJing their own events. As such, Samsung has responded to the growing demand for professional grade music editing tools by adding two new features to Soundcamp, specifically in conjunction with the launch of the Galaxy S6 edge+ and Galaxy Note5, thus making it easier for musicians to achieve the sound they desire.

Looper, the first new feature, lets users create loops, short sections of tracks that have been edited to repeat seamlessly, which are commonly used in a number of genres, including hip hop, trip hop, techno and contemporary dub. Users can select from over 250 free, studio-quality audio loops from Loopmasters, the world’s leading producer of sample libraries; download a number of compatible, paid extension loop kits to create unique tracks in a variety of styles; or incorporate and mix their own sources.

The function utilizes an easy-to-use XY-pad with controllable effects that can be used to enhance live performances, while the Galaxy Gear app, when used in conjunction with the Gear S2, provides gestural control of the effects and loop arrangements. The end result is one that is sure to impress audiences, just as it did at IFA earlier this year, when DJ Raik showcased Looper. Check out his performance below.

Originally developed by experimental musicians, sampling is the act of taking a portion, or sample, of one sound recording and reusing it as an instrument or a sound recording in a different song or piece. The Sampler function allows for sound sample import, record and playback functions, converting any sound—including the human voice—into a custom instrument.

Along with the addition of the Sampler and Looper features, new third-party apps have been made compatible with Soundcamp for the Galaxy S6 edge+ and Note5. Among these are the Unique synthesizer and WOW2 filter by Sugar Bytes, as well as the Phase84 phase synthesizer by Retronyms and iLectric Piano and iGrand Piano by IK Multimedia.

In an age when just about anyone can be a run-of-the-mill digital DJ, Soundcamp offers all the tools an artist needs to unleash their creativity and create unconventional tracks that go above and beyond the expectations of the music world. Soundcamp is now available for the Galaxy S6 edge+, S6 edge, S6, S5, Note5, Note4, Note edge, Tab S2, S and Galaxy View. Download Soundcamp in Galaxy Apps or the Google Play store.