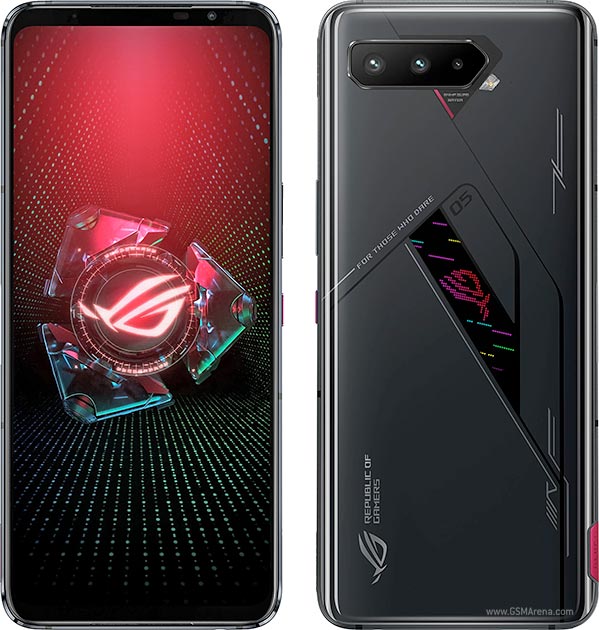 The ROG Phone 5 is currently the best gaming smartphone. Asus offers an additional Vision screen, more storage, and a larger scope of delivery with the Pro version. Our review clarifies for whom the upgrade is worthwhile.

The ROG Phone 5 Pro is different from the Standard variant visually and the build quality is on the same level. However, the big difference is on the back because the Pro has a so-called ROG Vision display instead of the dot RGB matrix. This can display smaller animations, also provides information about the current battery status when charging the smartphone and accompanies the connection of accessories with suitable animations.

Another difference is revealed in the scope of delivery, because the external AeroActive Cooler 5 is included in the box.

The equipment is unique for a smartphone. Besides the Pogo PINs for the connection to the fan, there is a USB 3.2 port (Gen. 2, up to 10 GBit/s, HDMI and dP support up to UHD, QC 5.0) right next to it and an additional USB 2.0 port (QC 3.0) on the bottom edge, which can be used for power supply while gaming. Furthermore, the additional ultrasonic keys AirTrigger 5 and an audio jack with High-Res Audio DAC are also on board.

The operating system Android 11 with the in-house ROG UI is used. Users who do not like this can switch, during the setup, to the standard UI, which is very similar to a pure Android.

All modern standards are used for the mobile data connection and the number of supported frequency bands for LTE and 5G has been increased again for the Pro version. Wi-Fi 6E is a fast WLAN standard that can connect to two networks simultaneously via dual WLAN and enables high and stable data rates in the test with the Netgear Nighthawk AX12.

The voice quality of the ROG Phone is really good and delivers a very good intelligibility when held to the ear, which only reaches its limits in very loud ambient noise. The speaker mode reverberates slightly, but has a good microphone range and quality. The Asus smartphone can accept two nano-SIM cards and supports VoLTE.

The ROG Phone 5 not only has a high refresh rate of up to 144 Hz, but the touch sampling rate of 300 Hz is also very high and promises a fast implementation of inputs on the touchscreen with a latency of 24.3 milliseconds. For biometric security, an optical fingerprint scanner is available in the display, which offers quite reliable recognition rates, but is not one of the fastest. Two-dimensional face recognition is also possible.

The ROG Phone 5 Pro relies on a camera setup that consists of three lenses. Besides the 64 MP main lens, an ultra-wide-angle and a macro lens are integrated. Even though the Sony sensor is still from last year, good pictures can be taken with it and the high reserves in terms of resolution allow smaller zoom levels without much loss of quality. Videos can also be recorded in 8k.

The front-facing camera also takes good pictures, but it cannot compensate backlight completely. Videos can be created in Full HD with up to 60 frames per second.

The display of the Asus ROG Phone 5 Pro is identical to that of the Standard variant. It measures 6.78 inches, works with a Full HD Plus resolution and up to 144 Hz. The OLED panel achieves up to 806 cd/m² in a pure white display and enabled ambient light sensor. With an even distribution of bright and dark areas (APL50), it is 1,088 cd/m² and 1,136 cd/m² with APL10. If you adjust the brightness manually, you have 488 cd/m² at your disposal.

It is positive that Asus has improved the DC dimming. Although this still only works with 60 Hz, it actually works now.

The Asus ROG Phone 5 Pro is powered by the Snapdragon 888 with a whopping 16 GB LPDDR5 RAM. The graphics calculations are handled by the integrated Adreno 660. Since the Qualcomm chipset is considered difficult to cool, Asus has focused exactly on this aspect and achieves a stable performance at all times in combination with the fan. Although the surface temperatures increase noticeably, they only get warm to the touch and remain absolutely harmless.

There is no game that Asus‘ smartphone cannot master in the highest detail settings, and it also offers broad support for titles with more than 60 FPS.

The two front-facing speakers can not only get very loud, but also provide a comparatively good sound image. There is also wide support for Bluetooth codecs as well as an excellent audio jack.

In terms of battery runtimes, the Pro model presents itself even more efficient than the standard variant; the manufacturer seems to have improved here as well.

Asus‘ ROG Phone 5 Pro has surprisingly little added value for its rather steep surcharge. The Vision display on the back is certainly a nice gimmick, but it does not offer any added value in everyday use. The doubling of the memory and the additional frequency bands could be more interesting, and the AeroActive Cooler 5 is included, which would otherwise also cost 60 Euros (~$70).

Nevertheless, the ROG Phone 5 Pro remains the best gaming smartphone at the moment, with a strong configuration. Besides the 144 Hz AMOLED display, the performance-stable processor, additional ultrasonic sensor keys, two USB ports, and the broad support of games with 120 and 144 Hz are particularly important.

Cheaper alternatives are the Black Shark 4 or the RedMagic 6R, but they also have to make concessions in the areas of speed, features and optional accessories.

The ROG Phone 5 Pro is currently difficult to get hold of and at the time of this review has even disappeared from the Asus eShop and can primarily be purchased via Asian sites like AliExpress.