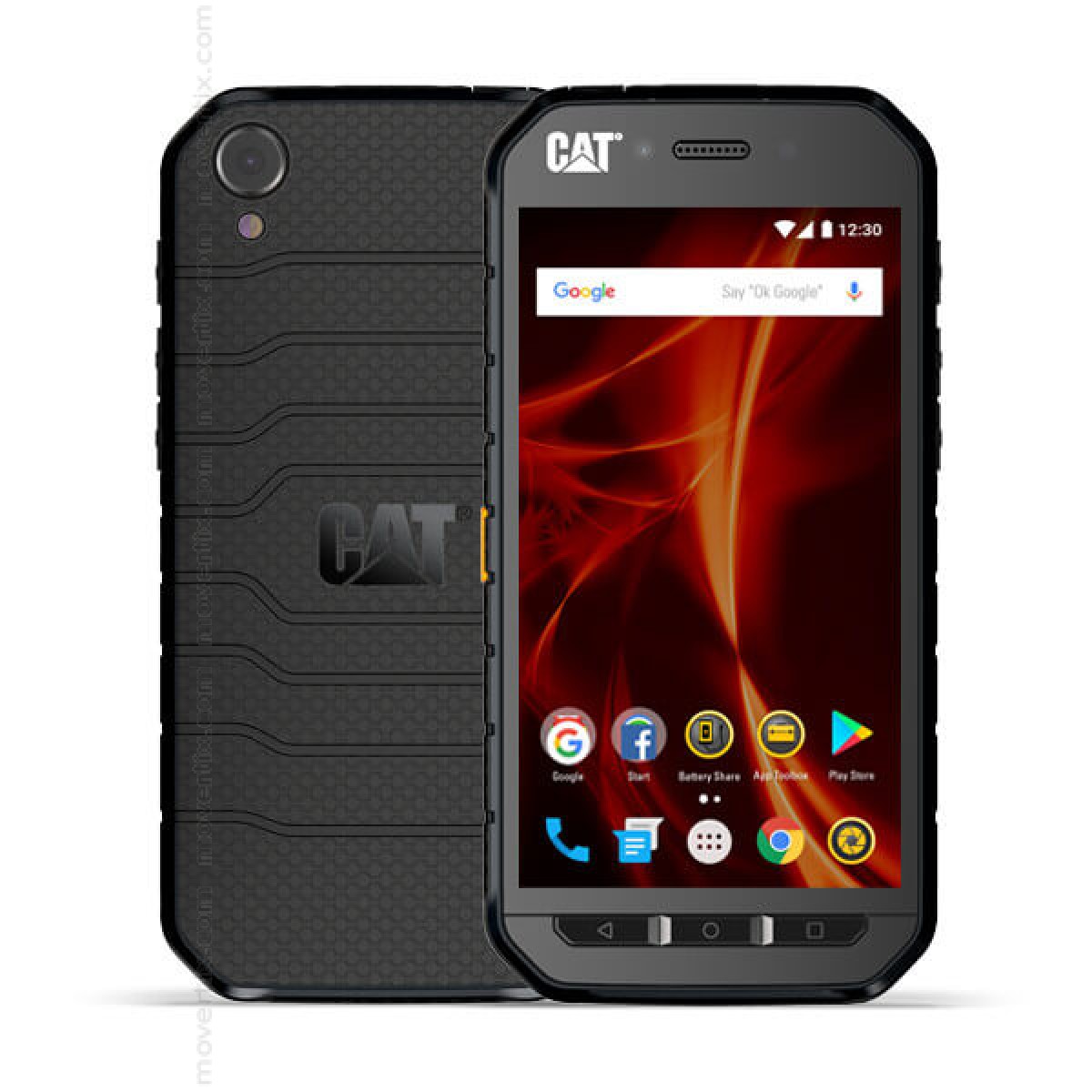 As our mobile devices move towards thinner and more elegant form factors, we lose track of a lot of the aspects the really matter in a phone. Battery life. Durability. These have been falling by the wayside since the days of the flip phone. When was the last time you didn’t worry about your phone’s battery or looked down terrified when you dropped your phone without a bulky case?

CAT (yes, that Caterpillar) explored these aspects in its new device, the CAT S41.

This isn’t a top-tier Android device. It doesn’t have the most impressive spec sheet, and you’re not going to get Note 8-level performance out of this thing. This phone is made for a special kind of user, who values ruggedness and battery life over everything else.

How does the S41 fare as an ultra-rugged piece of technology? Let’s find out.

Are you tired of using a bulky case on your phone? What if your phone was a bulky case? That’s what the CAT S41 feels like. It’s made of a thick, rubberized material reminiscent of a tire — fitting for a device from a company that makes construction equipment.

The shell raises from the screen a bit, which will keep it from taking too much damage from unexpected drops. Think about the design like an Otterbox Defender case built into the device. This might be a great option for those who value durability above all else.

This rugged design continues throughout other aspects of the phone, such as the physical navigation keys. This was pretty nostalgic for me, since I haven’t had physical keys on a device since the Droid Charge (shudder). They are very tactile and responsive, which is important to me as a keyboard critic and enthusiast (don’t hate). Double-tapping the home key turns the screen on, which is nice for those who don’t want to shift their hand position.

The phone’s got a microSD and SIM card tray, power and volume keys, a headphone jack, a microUSB charging port, and a bright orange “Push to talk” key. Each ports is covered by a flap made of the same material as the shell, and shields the ports from water, dust, and more. It’s IP68 rated, so you could theoretically drop it from 1.8 meters or submerge it in two meters of water for up to 60 minutes.

The “Push to talk” key is the real indicator of who this device is for. A group of CAT S41 users would be able to rapidly exchange information when close together. This will be most useful on construction sites for coordinating workers doing separate tasks. If you’re not a construction worker, you can also remap the button to execute different actions via short or long presses. This isn’t the Bixby button — you can use the key for pretty much anything.

The button also has an underwater mode, which locks the screen and allows you to take photos under water. I’m not sure why you would want to submerge this thing on purpose,  but it’s nice to have.

The CAT S41 sports a 5.0-inch Full HD IPS LCD display with Gorilla Glass 5. Overall, I feel very mixed about it. The color is fine. It has a respectable pixel density, at 441 PPI. But the bezels make the display feel more encased in the device than other options. Compared to something like the Razer Phone, which has large bezels that house front-facing speakers, the CAT phone’s display feels outdated. It has more bezels within the screen portion itself too.

For general use and web browsing, the screen performs quite well. Colors are quite saturated (though not as technically accurate as something like the Pixel 2), which makes for a pretty satisfying experience overall.

The CAT S41 can be used with gloves on, which is pretty rare. This adds to the construction-friendly nature of this device, since many hard labor workers will be wearing gloves while working.

Performance might be one of the CAT S41’s weakest spots. I noticed plenty of lag and stuttering around all areas of the OS, even when moving around the home screens. It’s not huge, but the stuttering can be annoying, and it detracts from the experience of the device quite a bit. These caveats probably won’t be all that noticeable on the job, though. It might be slower than their primary device, but as a work phone this should work just fine.

This lag is likely due to the device’s sub-par MediaTek Helio P20 processor. This mid-range chip was released over a year ago, so obviously you’re going to see some substantial performance differences between it and new chips in 2017. The SoC features a Mali T880 GPU, which is also decidedly mid-range, as is apparent during heavy gaming sessions.

Where the processing of this phone drop the ball, other features lift it back up. The S41 comes with an absolutely enormous 5,000 mAh battery which makes it last an incredibly long time. I was able to go a full two days of consistent use. It will last even longer if you’re a light user with a lot of standby time. The closest flagship we could compare this device to is the Razer Phone, which lasted a respectably long time with it’s 4,000 mAh battery. We ran our own battery test software on this device as well, and it beat out even the best ranking phone from our Best of Android battery test by miles, coming in at 23 hours and 18 minutes. That is extremely good.

It great to see a headphone jack present in this phone, but I wish it used USB Type-C instead of microUSB. Every device has trade-offs, but for the price it would have been nice if the S41’s specs were just a bit better.

One thing to note about the CAT S41 is its MIL-STD-810G certification. This certification was established by the United States military to test equipment and ensure it is up to their standards — it can cover a number of different environmental conditions such as temperature, explosive atmosphere, and salt fog, among other thing. Most consumer electronics certified with the standard are rated specifically for shock. That said, CAT specifically stated the S41 is certified for thermal shocks and salt mist spray.

Because the anticipated consumer for this device is a construction or hard labor worker, this certification is very important. If you want to read more about the MIL-STD-810G certification, check out the Wikipedia entry.

It’s hard to put it any other way — the CAT S41 cameras are bad. The 13 MP rear shooter is incredibly soft in anything but the most ideal lighting situations, and the front-facing 8 MP camera streaks when exposed to any significant light source. The front camera actually seems to do slightly better than the rear in many situations, which is pretty strange. Don’t use this phone as your main imaging device.

The rear camera tends to oversaturate photos more than any other smartphone camera we’ve tested. Images in standard look like the saturation slider was pulled a bit too far to the right in editing software. There is an interesting settings menu here that allows you to tweak aspects of the camera to your liking, but they didn’t seem to do much.

One interesting feature this phone has is the ability to take “Picture-in-Picture” shots, which takes an image with the rear and front camera at the same time, allowing you to pin the second image anywhere on the screen. I’m not really sure how this feature would be useful, but I’m also not a construction worker, so I’ll have to defer to those guys on this one.

The video mode is capable of 1080p video at 30 fps, but it suffers from the same saturation and softness issues as the photo mode. Another weird feature Caterpillar decided to include is the ability to record using filters like Negative, Aqua, and Sepia. I can’t see why you would want to use these modes in, well, any circumstance, but the option is there for those who want it.

The CAT S41 is running Android 7.0 Nougat, which, at time of writing, is a 17-month-old build of Android. We do not expect new devices to launch with 7.0 Nougat at this point. Newer, more secure builds of Android have been out for months. The target buyers of this phone probably won’t care as much about timely software updates, but the fact that it runs such an old version of Android makes us feel like it might not ever receive one.

The S41 features CAT’s extremely light user interface. It feels mostly stock, with a few small UI tweaks like some custom icons, which make the phone feel more like a Caterpillar device. There’s a registration app, FM Radio, App toolbox, and a “Catphones” app which is just a link to the online support page. The most useful app built into the phone out of the box is the “Share” app, which allows you to charge other devices with the massive 5,000 mAh battery packed in this thing. You can usually only do this with devices using USB Type-C, so it’s nice to see this feature available, especially since it has one of the biggest batteries on the market.

If you’ve used a Nexus or Pixel device, the software essentially reflects what you would see on one of those devices. I’m always happy to see a built-in FM radio, but you will need to use some wired headphones as an antenna for this to work. Still, it’s very nice to have.

Cat S41 features a rugged body and a big battery

Caterpillar is a company that many likely know for its construction equipment, but it also dabbles in the mobile market. And today Caterpillar introduced one of the most rugged Android phones we’ve seen in awhile.

The Cat S41 features a toughened body that offers IP68 water and dust resistance, meets the MIL SPEC 810G standard, and can survive repeated drops from up to 5 feet 9 inches onto concrete. It’s also got a Gorilla Glass 5 screen that you can use with wet fingers or gloves.

Another notable feature of the Cat S41 is its battery. The phone is powered by a massive 5,000mAh battery that you can also use to power other USB devices using the Battery Share power bank feature.

There’s a 5-inch 1920×1080 display on the Cat S41 as well as an 8-megapixel camera, and around back there’s a 13-megapixel camera with flash. Inside the phone’s tough body lives an octa-core MediaTek processor, 3GB of RAM, 32GB of storage, and a microSD slot for adding even more storage if you need it.

Rounding out the Cat S41’s feature set is VoLTE, VoWiFi, and a programmable shortcut key that you can use for quick access to Push to Talk, the SOS Lone Worker app, or the flashlight or camera apps.

The Cat S41 is $449 and is available from Caterpillar’s website as well as Amazon, BestBuy.com, eBay, Home Depot, and B&H.

We don’t see a ton of rugged smartphones released nowadays, but the Cat S41 looks like a solid one. Not only does it have a body that sounds like it can take quite a beating, but it’s actually got some respectable features, too, including a 1080p screen and a battery that’s bigger than many other phones on the market.