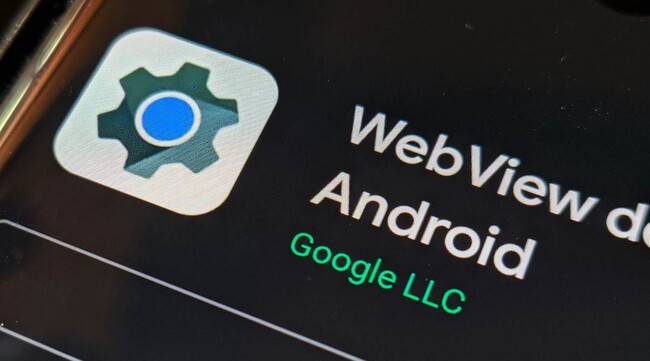 Several users have taken to social media to report that the Google app on their Android phone is constantly crashing. While there’s no clear reason why this is happening, a new update seems to be causing the problem.

The issue doesn’t seem to be limited to just one version of the app. I faced the problem with version 12.23.16.23 on my Redmi K20 Pro whereas one of our tipsters experienced it with the beta version 12.24.7.29. Lens, Podcasts, and the Assistant are also affected by the crashes as they’re bundled into the Google app. 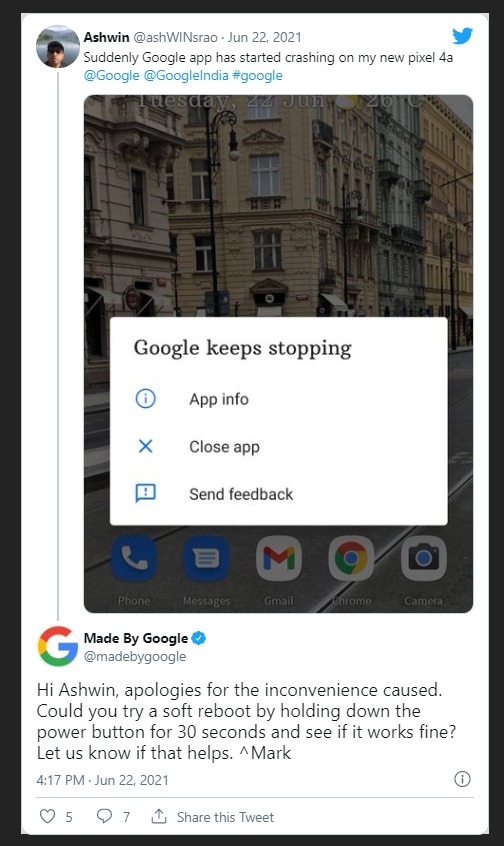 Google‘s Twitter account has suggested a soft reboot to fix the issue, and it seems to be working for some users. However, the fix isn’t universal and you might need to resort to other steps to stop the crashes. For me, uninstalling the update via the Google Play Store did the trick, but you could also try clearing cache and data. 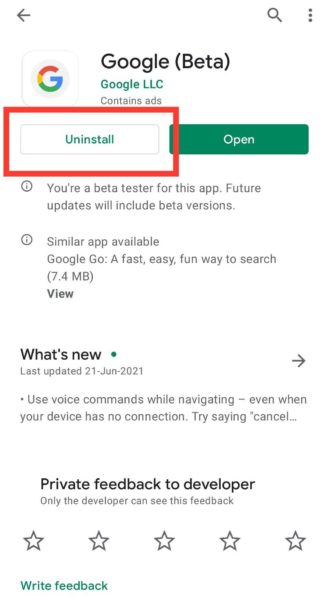 A similar problem with tons of crashing apps plagued Android phones back in March, though that time around, the Android System WebView was the culprit.

If you’re experiencing a bunch of apps suddenly crashing on your recent Samsung phone, you’re not alone. This afternoon US time, reports from dozens, then hundreds of users on the Samsung subreddit started coming in, complaining of apps crashing on their phones, constantly and seemingly at random. It’s causing some major headaches. You can quickly fix the problem by disabling the Android System WebView app, or updating it via the Play Store or APK Mirror.

Users of recent Samsung phones—Galaxy S20 and S21, Note 20, A50 and A70 series, among others—seem to be the most heavily affected. There are scattered reports of the same problem happening to Pixel, Motorola, and OnePlus phones, though those may be coincidental issues unrelated to the primary problem. Owners of some older Samsung devices, including one J7, are reporting similar issues. The app crashes aren’t limited to any specific subset: applications with more or less any function, from any developer, are crashing repeatedly and without warning.

A few users have reported success with a relatively simple method: uninstalling the latest version of Android System WebView, a small tool that allows apps to render a web page using Chrome without leaving the application. It’s used in a lot of different ways, including secure logins and viewing support documentation. Reddit user /u/WatfordHert detailed their method, which is fairly straightforward.

How to Fix the Recent App Crashes

To use WatfordHert’s method, go to the main Android Settings menu, then tap “Apps & Notifications” (just “Applications” on some phones). Find Android System WebView in the list and tap it. (If you can’t see the app, check the three-dot menu and tap “show system apps.”) Do not disable the app.

Tap the three-dot menu at the top right of this screen, then select “Uninstall updates.” This won’t uninstall Android System WebView completely—it’s an essential component, and many apps will cease to function without it. Instead, it will remove the updates installed from the Play Store and restore it to the version that came with your phone. This isn’t ideal, but it’s better than having a phone that can’t go thirty seconds without an app crash.

Tap “OK” on the warning that pops up, and you should be done. If you’re still seeing constant app crashes, try a reboot of your phone.

We can’t personally test this method on all the phones being affected, but multiple Reddit users are reporting that it’s working for them. If you see the app crashing problem return, try repeating the steps above—the Play Store may have automatically updated the app without alerting you. According commenters like Jorell, this method may not work on devices running older versions of Android—try uninstalling the updates from the Chrome browser itself instead.

If you want a more permanent solution, Google quickly issued an update to the Android System WebView application in the early hours of March 23rd. It should be rolling out on the Play Store right now, but if you don’t want to wait, it’s available on APK Mirror as a direct download. The version number you’re looking for is 89.0.4389.105.

According to a service update posted to the Google Workspace Status Dashboard, this version of the app should fix the problems with other reliant apps crashing. Note that users who are already on the developer previews for Android 12 shouldn’t need this—they’re already running early versions of Chrome 90, and WebView gets updated along with its.