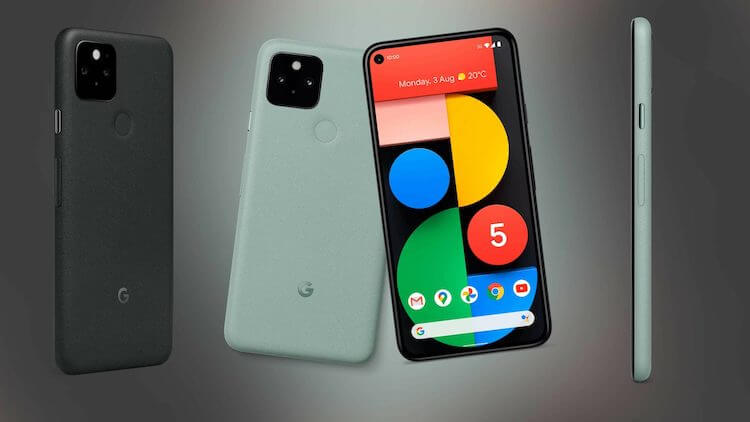 Google has taken a drastically different approach with the Pixel lineup. They’ve focused on providing a great user experience without maxing out the specs on the processor or the screen. The Pixel 5 maybe this year’s Google‘s flagship, but it’s not a flagship device as we know it.

Google did away with the finnicky radar sensors that enabled Motion Sense features on the Pixel 4 and 4 XL. Motion Sense wasn’t really as useful as the advertisements made it out to be. Because of this, the fingerprint scanner is back. Next, we don’t have the latest Snapdragon chipset on the Pixel, but we do get the capable Snapdragon 765G with support for 5G networks. Finally, the Pixel 5 swaps out the 2X telephoto from last year in favor of a new ultra-wide camera.

The overall form factor is far more manageable with a 6-inch display with a punch-hole selfie camera cut out and compact size. The Pixel 5‘s design is largely based on the Pixel 4a that came just weeks before it, but it comes with the slimmest bezels we’ve ever seen on a Pixel phone. It also has a beefier 4080mAh battery compared to the Pixel 4 XL’s 3,800 mAh. Combined with the power-efficient Snapdragon 765G, the Pixel 5 should also see improvements in battery life, but we’ll get to that.

The Pixel 5 does achieve something new. It’s got a housing made of recycled aluminum. However, it still supports wireless charging (and even supports reverse charging this year) – proving that smartphone makers don’t need to make fragile glass sandwiches to achieve the popular feature. Google did this by putting the charging coil on the outside of the housing before applying the texturized coating and ran the coil through holes cut out of the back of the chassis.

We can’t help but think that Google is taking a step backwards with the Pixel 5. However, its lower price and focus on experience may be in Google’s favor. The need for a cheaper headlining 5G smartphone is more urgent than in the past and its price point pins it up against the recently announced iPhone 12 Mini, the OnePlus 8T, and the Samsung Galaxy S20 FE.

The camera hardware stays the same on paper, but we’re curious to see if the software has allowed advancements in imaging. We’ll keep an open mind and let you know if Google has solidified its software and camera experiences with the Pixel 5. Let’s move into the box and see what’s inside.

On the exterior, the Pixel 5‘s box shows the phone’s picture with the chosen coat of color. Our model is the “Sorta Sage”. The Pixel 5 comes with the bare necessities inside the box, which prominently features the #teampixel hashtag and 5G logos.

The phone comes with some documentation, a SIM tool, USB “Quick Transfer adapter”, 18W USB-C PD adapter, and USB-C charging/data cable. Google only included earbuds once with the Pixel 3 (XL) but later removed them for the Pixel 4 (XL) in the US.

The Google Pixel 5 is not your average glass sandwich as it’s got a body made of recycled aluminum. In fact, Google deserves praise for proving that phone makers don’t need to use plastic or glass to get a smartphone to support wireless charging. You see, aside from wireless charging, having a smartphone with glass on the back makes it much easier for RF signals to pass through and makes it more prone to damage. This metal body also makes the Pixel 5 the first 5G-enabled smartphone with a metal body construction (even if it’s partially metal).

As Google explains, the Pixel 5‘s charging coil is placed right on the outside of the aluminum chassis before the assembly is placed in an injection mold. The wiring for the coil passes through the metal shell before getting a layer of “bio-resin,” which is basically a thin plastic layer. After that, the body is smoothened out and coated with either the “Just Black” or “Sorta Sage” exterior coating.

Google says you won’t be able to feel the coil behind the coating and its reasoning for going with this structure of materials over plastic or glass is to keep the phone thin. This coating feels unlike any other Android smartphone. It feels like granite or sandstone that’s been smoothened out and soft to the touch. The grip here is superb and certainly better than that of any glass.

The 6-inch screen is protected by Gorilla Glass 6, and just like the Pixel 4a, the 5 has a punch-hole cutout for the selfie camera. Under strong light, we can faintly see the proximity sensor behind the display, just below the earpiece. We appreciate these little touches that help keep the bezels slimmer than ever.

Compared to the Pixel 4’s 5.7-inch display, the Pixel 5 has got a larger 6-inch screen that fits in a device that’s slimmer in every dimension, even shaving off some weight. This is due to the extra bulk that the radar sensors took up in the previous-gen Pixels. The Pixel 5 weighs 151g and measures 144.7 x 70.4 x 8 mm, and is rated IP68 water resistance.

On the left side is a SIM card tray with space for a single nanoSIM. Remember that the Pixel 5 also supports an internal eSIM for dual SIM connectivity. The right side has a volume rocker and ultra-shiny power key. The accented power key on the Sorta Sage Pixel isn’t painted in a different color as Google has done in the past. It has made this button and the “G” logo on the back shiny, giving them a nice contrast to the soft, textured exterior coating.

The fingerprint scanner can be seen and felt easily at the back. Meanwhile, although there’s a camera hump present, it doesn’t protrude enough to cause the phone to rock back and forth on a table.

There’s no headphone jack on the Pixel 5, just the one USB-C connector at the bottom. The left port is a microphone, and the right port is one of two loudspeakers. There’s also a tiny microphone hole in the camera square on the back.

The overall design very closely mimics the Pixel 4a but with a slightly larger display and, of course, the dual cameras. We are content with the rounded sides and high-grip material on the back of the Pixel 5. We are glad to see more phone makers revert to more compact form factors as things have been getting a little out of hand, pun intended.

The Google Pixel 5‘s price point positions it in the same space as the newly-announced iPhone 12 mini, the Samsung Galaxy S20 FE, and the vivo X50 Pro. Although all of them are around the same price, some offer more value than others depending on your needs.

Then other packages offer the same or more for a lower price. The first device that comes to mind is the OnePlus Nord, which has twice as many cameras and runs the same chipset for less. The Nord even has faster Warp Charging, but it does omit wireless charging. The OnePlus 8T is priced like the Pixel 5 but offers high-end performance and 120Hz smoothness.

The iPhone 12 and iPhone 12 Mini are just arriving on the market, and this is the first year that these iPhones will offer 5G support. Their preliminary reviews reveal that battery life is weaker than their predecessors. Still, the iPhone cameras are top-tier, and iOS is smooth and responsive.

The Pixel 5 has improved video recording this year with its processing tweaks and new stabilization modes. Suppose you’re after something that’s going to give you an even more advanced video recording experience. In that case, the vivo X50 Pro has a micro gimbal built into the camera assembly with some nifty controls and shooting modes.

The LG Wing is an entirely different class. Aside from having a higher price, it’s experimental T-shaped form factor brings a fresh way to interact with a smartphone. Both it and the vivo X50 Pro are running the same Snapdragon 765G chipset with support for 5G networks.

The Google Pixel 5 is an evolution of the kind of smartphone that Google wants to offer. It solves the battery life issue that’s plagued all Pixel phones before it, and it’s taken a decision to switch up the hardware materials while keeping Google’s obsession with using non-standard textures and an understated design and overall look. We are also glad to see something more compact and pocketable arriving in a sea of super long glass slabs.

Google was creeping up on $1000 territory with the Pixel 4 XL but pumped the brakes with the Pixel 5 while cutting corners in just the right areas that don’t compromise the overall experience. The midrange processor might be a turn-off for some who would instead go with a cutting-edge chipset, which both Samsung and OnePlus will gladly sell you for the same price. In any case, performance is adequate for a smartphone in this day in age (as my colleague Prasad would attest), and the Snapdragon 765G will age gracefully.

Then there’s the camera, which feels more like a side-step than advancement. Although Google is adamant about the features and improvements to the camera, the software side of photography can only improve so much. We feel that this ceiling has been reached, and Google is due to put out a new Pixel with a more advanced camera. The Pixel 2’s camera was ahead of its time, but today the Google Pixel 5 is really just playing catch-up with the new ultra-wide camera. The selfie camera is also due for an update.

Google’s implementation of Android 11 on the Pixel 5 is smooth and consistent – perhaps the best stock Android has ever gotten. It will be interesting to see Google’s next step from here, but the Pixel 5 is a great first move for a lineup that’s bound to benefit from a future high-end Pixel 5 “Pro” model if there ever is one.