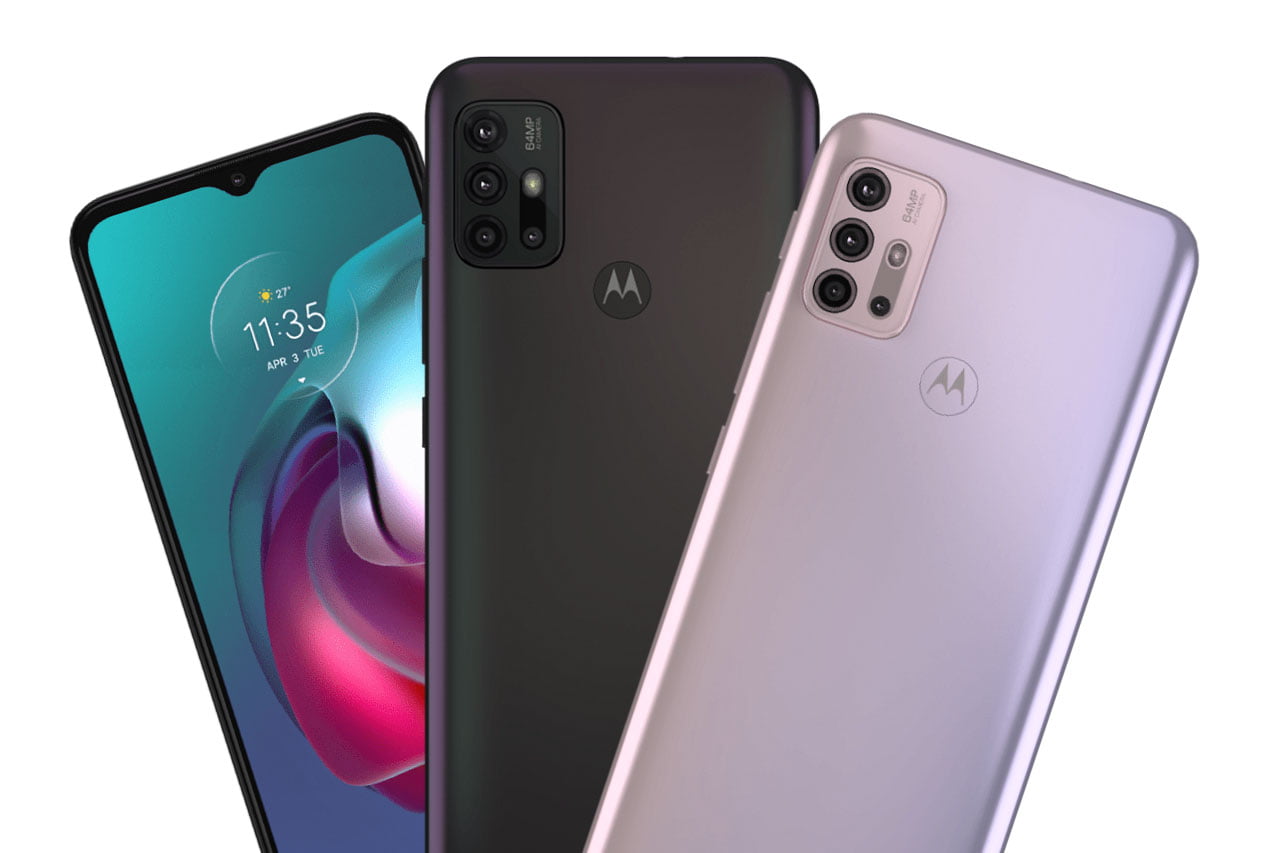 The famed Moto G has gone double-digits this year – Motorola is offering three numbered entrants in the lineup to go with the G Stylus, G Power and G Play from January, and we now have the Moto G10, G10 Power and Moto G30. Abandoning continuity in search for diversity, the trio occupies different levels of the midrange, with the Moto G30 being the highest-specced one. Let’s start with that one then.

The Moto G30‘s standout feature in this confusing crowd of phones is the high-refresh-rate display – moderately high at 90Hz, but certainly higher than the others. Otherwise, it’s not really a head-turner – an LCD with a 720p resolution on a 6.5-inch diagonal is about as pedestrian as they come.

You could say the same of the Snapdragon 662, though we prefer to frame it more positively – as a balanced mid-tier performer that’s both powerful and frugal, and a noticeable step up from the SD460s of the G10s.

The 64MP main camera, too, puts the Moto G30 above its immediate family, which top out at 48MP. The 8MP ultra-wide appears to be shared with the G10, G10 Power, and the G Stylus, going strictly by the numbers though there could be nuances to that. In any case, we have a G10 for side-by-side comparisons – all in due time.

Other less standout but still feel-good bits on the Moto G30 include the 5,000mAh battery (which, it seems, has quietly become the standard capacity across many segments) and the 20W charging capability. A classic rear-mounted fingerprint sensor is a nice throwback to simpler times, as are the FM radio and headphone jack. Additionally, you’d be getting Android 11 out of the box, which remains something worth pointing out even some six months after the OS’ release. Speaking of that box.

The Moto G30 ships in Motorola‘s default one-piece navy packaging. Inside lies the phone, already in the supplied transparent soft case – protected even before you take it outside of the box.

The Realme 7 starts at around €180, but that sum will only get you 64GB of storage, albeit 6GB of RAM. The Realme wins for display resolution and fast charging, but it’s a tie for display quality and battery life. Perhaps most importantly, however, the Realme has a vastly more powerful chipset, and that should settle it if you’re into gaming, or 4K recording. The Moto does counter with a newer Android and a more stock look, if that’s your thing. The Realme 7 is comparatively more expensive in India, where it’s the 7i that sells for Moto G30 money, and that’s mostly a tie all around unless you count small victories like Android 11 in the G30’s favor vs. the 7i’s dedicated microSD slot.

The Poco X3 (NFC) is another compelling counter-offer if you’re looking at the Moto G30. It’s got a beefier chipset and a higher-res display, too, but spices things up further with an even higher refresh rate than the Moto’s, plus stereo speakers. The Moto has slightly better battery life and Android 11 already, while the Poco charges faster and has an IR blaster. Again, the Poco X3 NFC makes more sense in Europe for Moto G30 money, while the non-NFC version sold in India is pricier than the G30.

Another Xiaomi, the Redmi 9T, is an interesting alternative as well. It may not have a high refresh rate display, but it’s 1080p. The Redmi also scores points for its stereo speakers and dedicated microSD slot and, in typical Xiaomi fashion, the IR emitter. The Moto, while not flawless, would still be our choice if the camera quality is a priority.

If you’re looking to get a Samsung around the Moto G30’s price point, the Galaxy A21s is perhaps the closest. The Moto wins for performance, for a change, and has the better display (higher contrast, high refresh rate), while battery life and charging speeds are similar, as is camera performance. The Galaxy has the brand name going for it, and perhaps the dedicated microSD slot.

The Moto G30 is not the Moto G from late 2013, which you could recommend as the universal best option for a full-featured smartphone on a budget. The Moto G gradually evolved from that one phone to an entire lineup, and none of the lineup members today is the no-brainer purchase that the original was.

But as current Moto Gs go, the G30 is, in fact, a rather reasonable buy. It stands out from its stablemates thanks to its 90Hz display, which also happens to be one of the highest-contrast LCDs we’ve tested. Photo quality, while not great at night, is actually pretty pleasing in good light, and it’s not like competitors in the price range have spectacular low-light performance anyway. Add to that the current, near-stock Android 11, with just the right amount of features added on top, and the top-notch battery endurance, and the Moto G30 is looking like a very well-rounded package for the money. We wouldn’t straight-up recommend it, but we’d keep it on our shortlist.