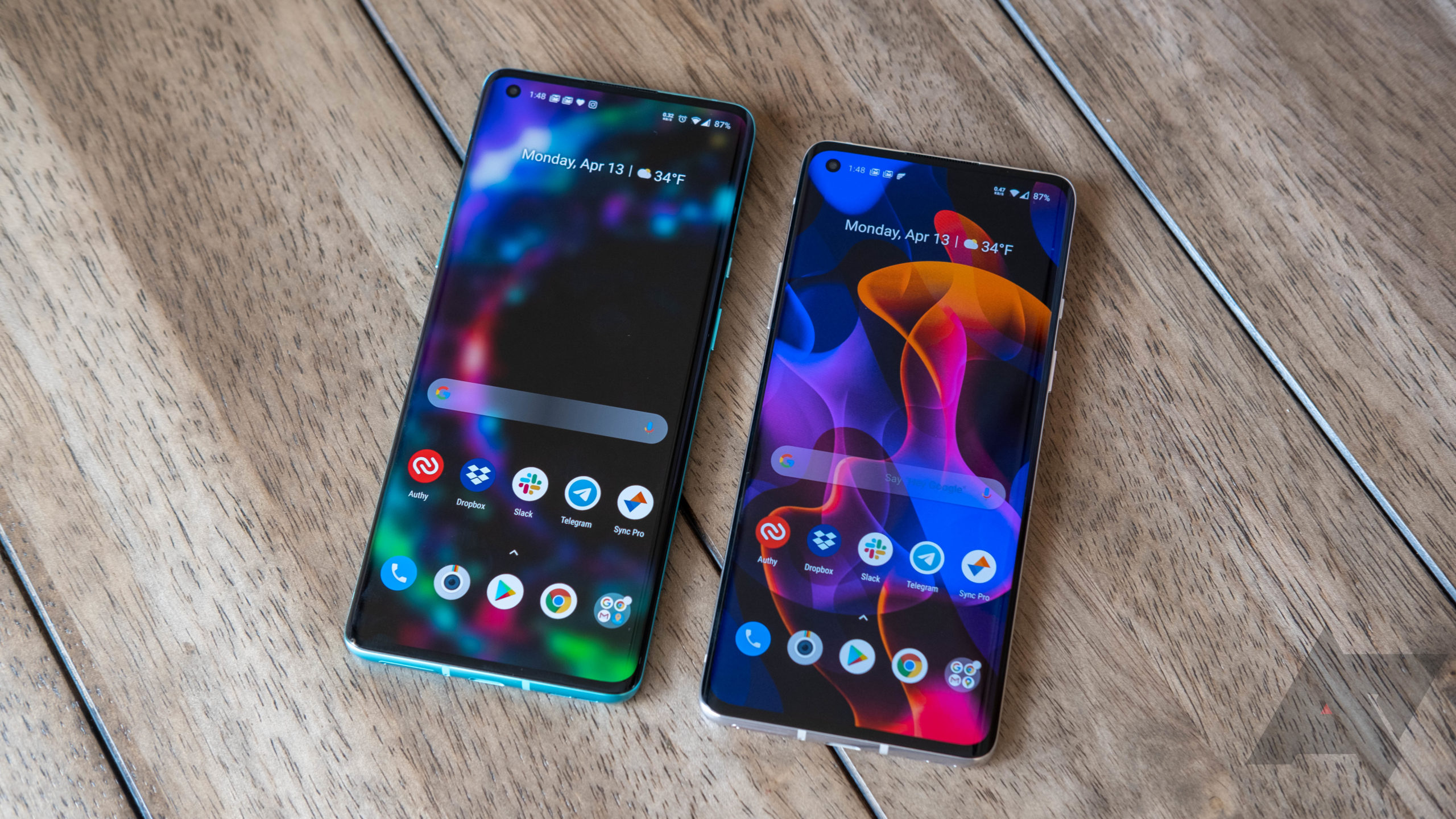 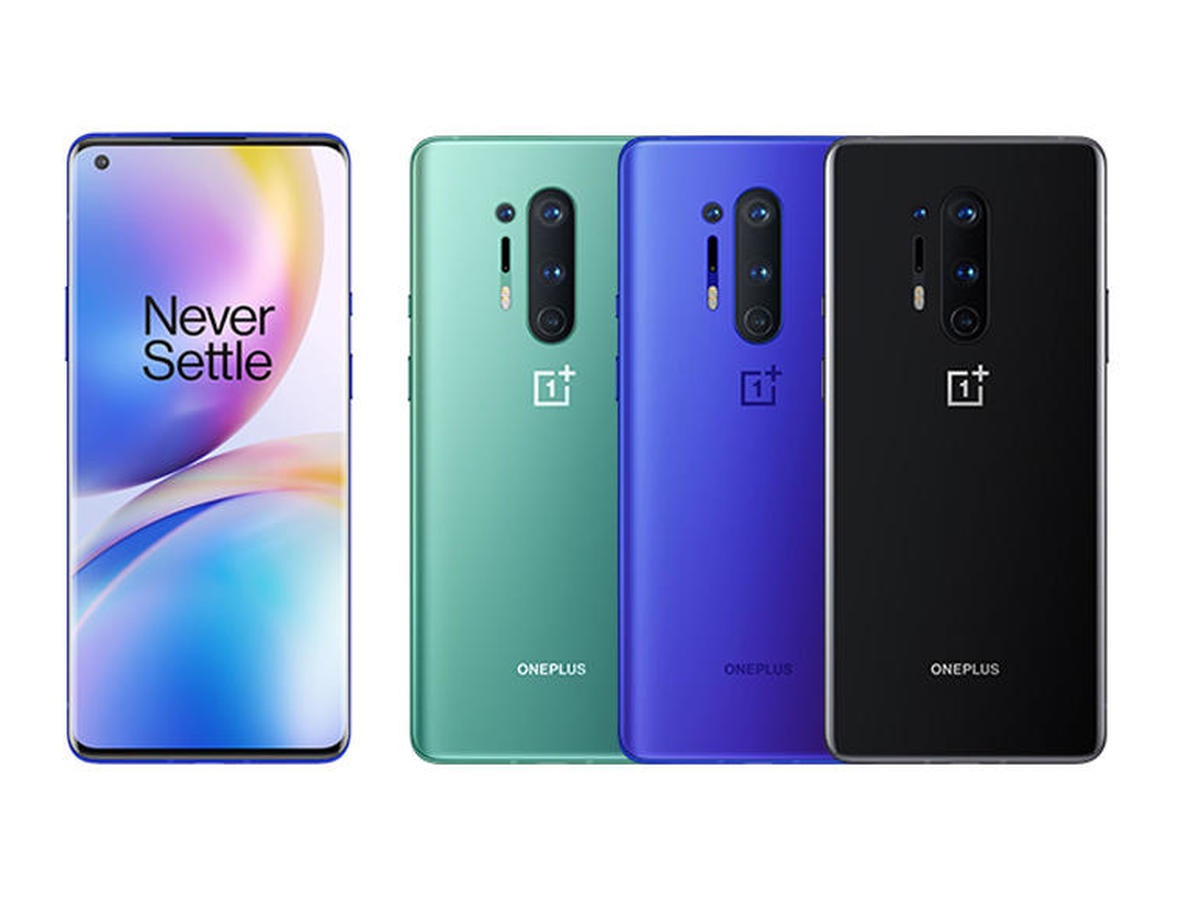 Up to this point, OnePlus has climbed its way up from the high-end budget phone to the fully-fledged flagship. The brand once called its phone the “Flagship Killer”, and the OnePlus 8 Pro has become the very thing that the company initially aimed to dethrone.

Surely, the smartphone landscape has changed over the past several years. There are now so many contenders in the sub-$500 and sub-$400 price that the company has shifted its focus to creating a more prestigious brand name. With this iteration, the company has presented itself with an updated all-CAPS “ONEPLUS” typeface and tweaked “1+” logo. 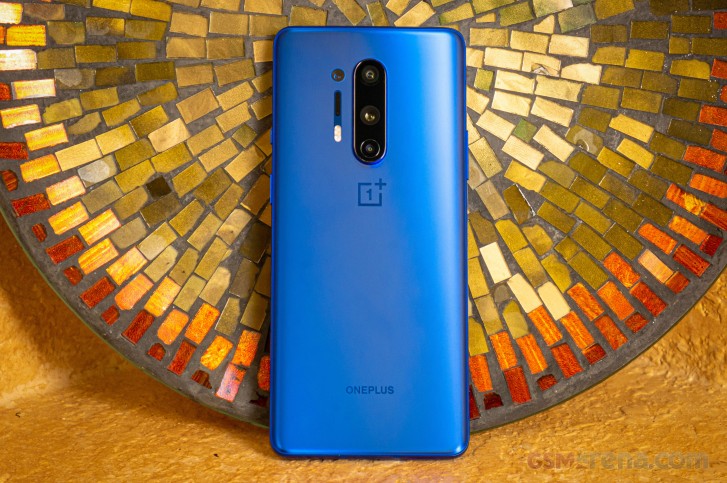 Now with the OnePlus 8 Pro, the company thinks it has what it takes to compete in the flagship category at the $1000 price mark. Well, technically – the OnePlus 8 Pro starts at $900. The OnePlus 7 Pro was a strong seller, but will OnePlus have just as much success in a higher price bracket?

The 8 Pro has an impressive spec sheet: high-end CPU, 10-bit high-end AMOLED screen, Warp Charge 30T, and for the first time from OnePlus: support for wireless charging and even reverse-wireless charging for sharing juice with an accessory or a to give some juice to a friend.

That high-end display is of the 120Hz variety – and it’s a panel made by Samsung. OnePlus is promising near-perfect color accuracy, over 1 billion colors, and the brightest output of any display it has ever put in a smartphone. The smoothness of the still-higher refresh rate display is the company’s way of staying ahead of the trends – which could be an advantage in markets like the US where the company has a presence.

There’s a new camera system with the notable larger Sony IMX 689 sensor behind the quad-camera’s main lens. The ultrawide camera gets a larger sensor as well, but the telephoto camera remains pretty much the same as the OnePlus 7T. OnePlus has a new “Color filter camera” whose long-term usefulness remains to be seen. 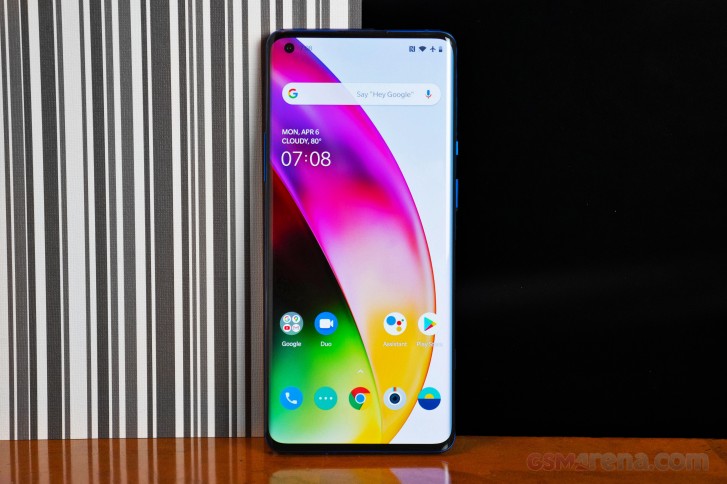 OnePlus has further refined its Android skin, Oxygen OS with new icons, and its revamped its UI’s animations for the 120Hz experience. Oxygen OS offers a stock-Android like experience, close to that of a Google Pixel, and OnePlus is known for its speedy turnaround when it comes to firmware updates.

OnePlus is the only high-end Chinese brand available from three of the four major US carriers – and many American consumers might be clueless of the brand’s existence in a market where Apple, Samsung, and Google are the most known (and most advertised) brands.

We always praise OnePlus for its packaging. The high-quality cardboard materials, and soft-touch red finish make a very good first impression. Our review unit doesn’t have the new all-CAPS name on the side, but it does have the updated “1+” logo.

Taking the lid off the long red box, we’re greeted by the OnePlus 8 Pro in Ultramarine Blue with a pre-installed factory screen protector. A notice on the plastic wrapper recommends using official OnePlus screen protectors for best compatibility of the in-display fingerprint scanner. 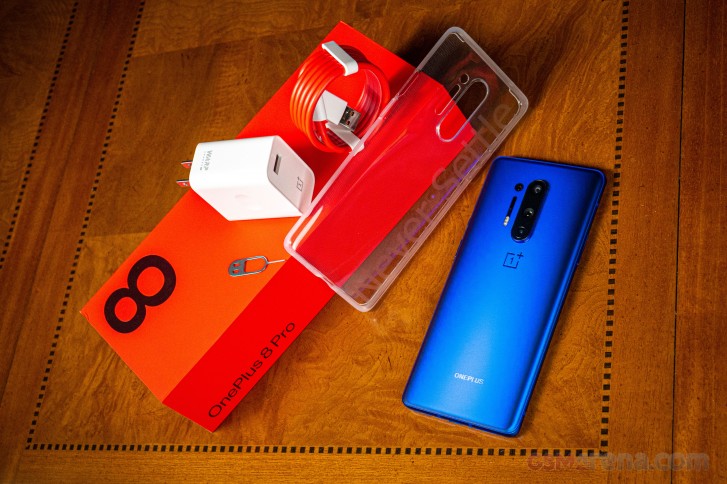 The cardboard cradle that holds the 8 Pro in place is also a box where the phone’s documentation is held, along with a SIM tool, welcome letter, and quick start guide. The words “Never Settle” sit below the smartphone as you unbox it – reminding us of the company’s long-time motto. Beneath this phone cradle is an included clear case to show off that deep blue color, and the Warp Charge 30T adapter and cable.

Now that we’ve seen what’s inside the box, head to the next page where we’ll spend some time talking about the phone’s design, ergonomics, and build quality.

This is the first time OnePlus has ever made any of its devices this expensive. As such, we’ll try to pair it up against other flagships that are near or over a grand. In the US, the only way to purchase the 8 Pro is unlocked from OnePlus (the OnePlus 8 is sold directly from carriers) and that’s not a great strategy if it is trying to convince consumers that they should buy OnePlus over Samsung or Apple. 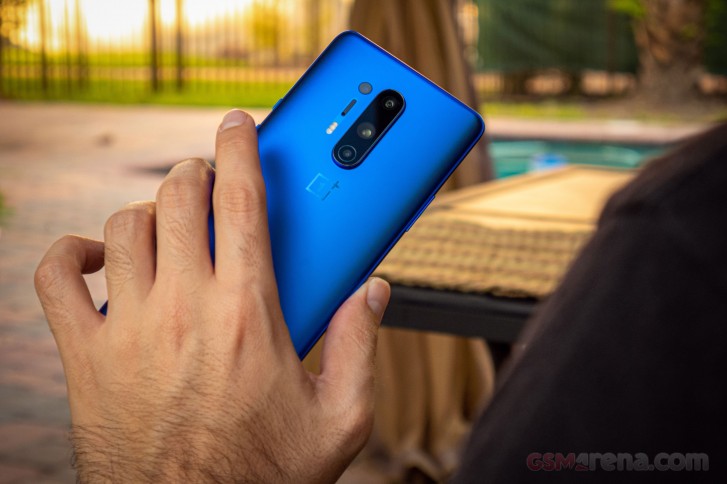 In any case, let’s look through alternative devices. Starting with the LG V60, both devices are priced similarly at $899, but the 8 Pro is more equipped with features than the V60. Both are about the same in video quality, but LG’s camera experience is certainly more polished and offers far more advanced video and audio controls. 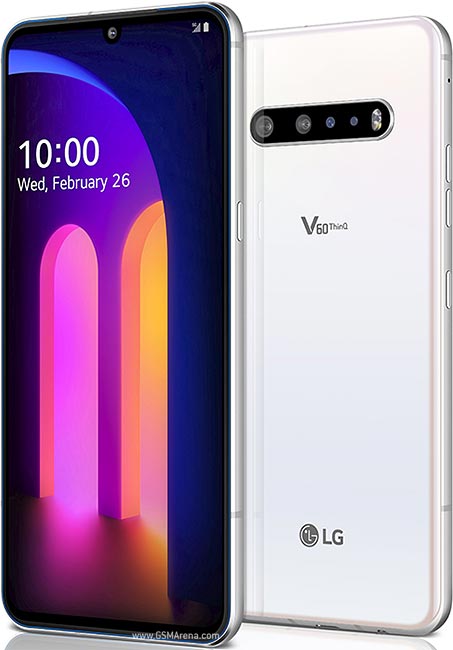 The iPhone 11 Pro Max is the largest iPhone that Apple makes and the display on the 8 Pro is superior in almost every way. Of course, iOS is a completely different landscape with similar image quality – though the iPhone doesn’t use a high-resolution camera sensor. The iPhone’s ultrawide camera doesn’t have autofocus either.

Cameras and software aside, it would be difficult to convince an iOS user to switch to a OnePlus device, unless they are already looking outside of the iOS ecosystem from boredom or desire for something more exciting. 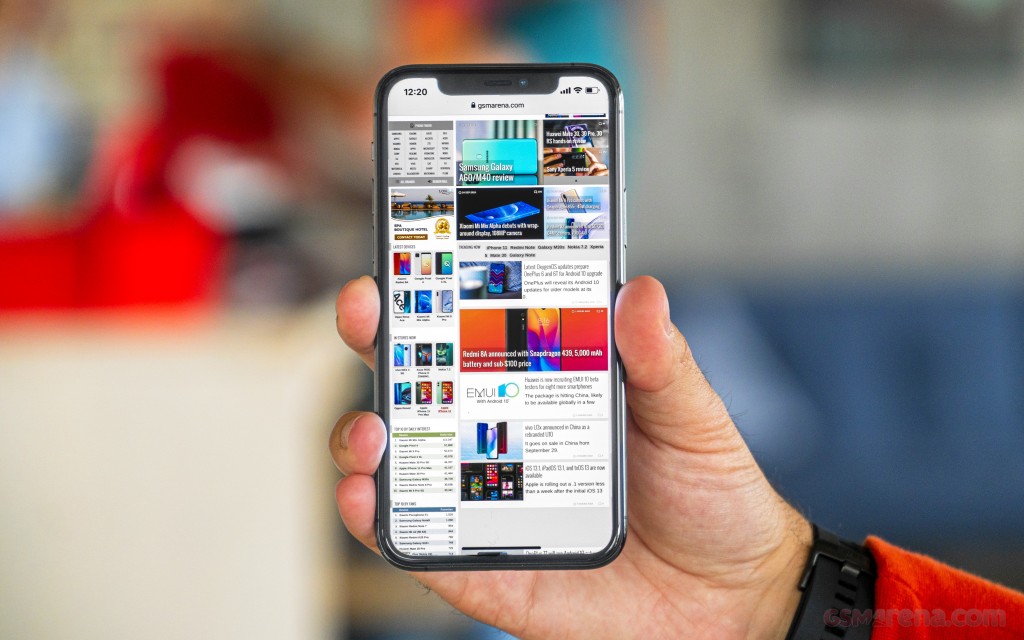 The Galaxy S20+ might be a worthy alternative for the 8 Pro, though it’s certainly more expensive. Ironically, Samsung’s flagship no longer has a dual-curved display while the 8 Pro has the curviest display yet. Samsung’s One UI Android skin can be an acquired taste for some who might prefer a more stock-Android appearance like that of a Google Pixel phone. 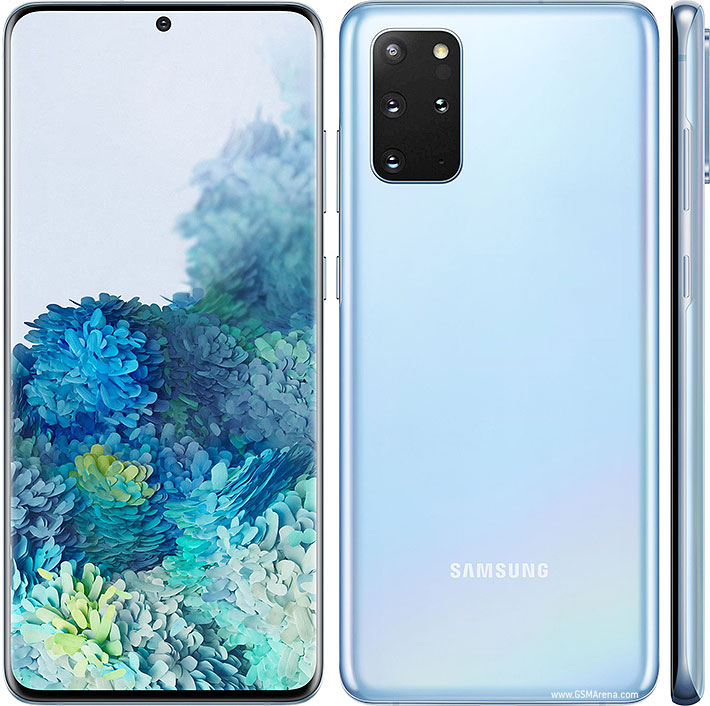 Though they are distant cousins, the Oppo Find X2 Pro and the 8 Pro have similar DNA (the two brands are sister companies, after all). Although its more expensive, the Oppo Find X2 Pro has a stronger emphasis on photography prowess with its periscope telephoto camera. There’s also the luxurious Vegan leather option, as well.

If you’re in the US, chances are you’ve never heard of Oppo before – since the company has no presence in the American market. 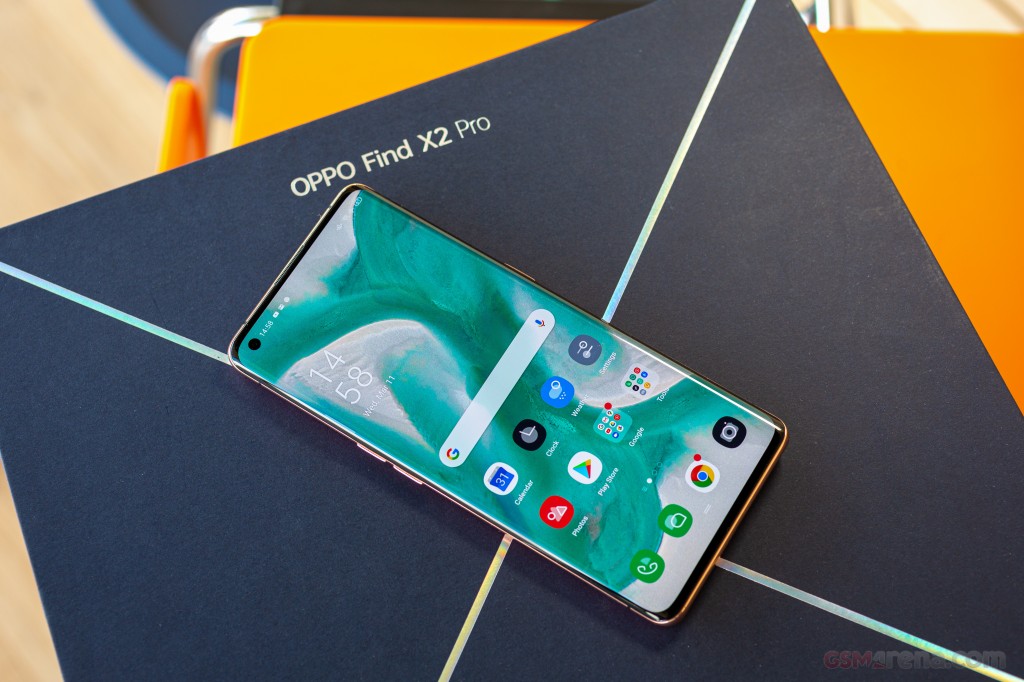 Another device you won’t find the US, the Huawei P40 Pro is the latest flagship from Huawei, also with an emphasis on photography and imaging. Still cursed with last year’s US-Huawei ban, the brand makes a compelling phone that can’t be used with Google Services – which could be a deal breaker for many consumers in Western markets. 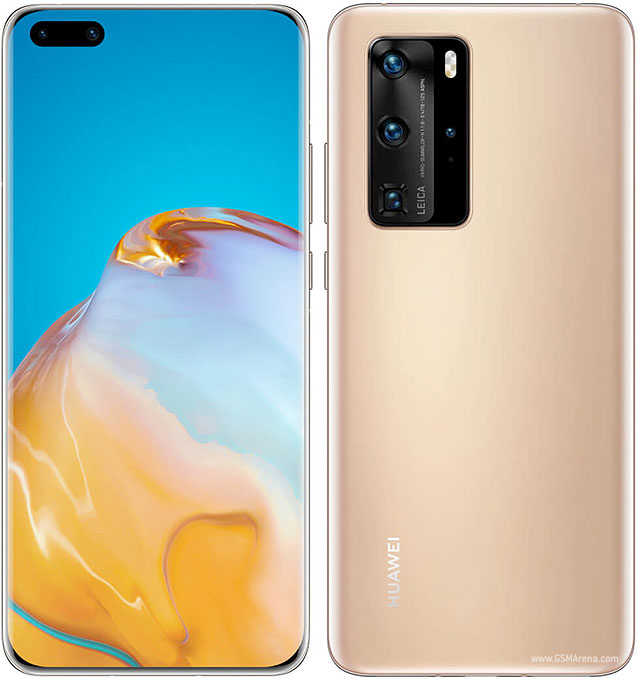 Xiaomi’s latest flagship is in a similar situation as the 8 Pro: it has shed away its midrange, high-value image and presents itself as a proper flagship with a flagship price to match. The Mi 10 Pro 5G is certainly well-spec’d on paper and its 108MP camera rivals the 8 Pro‘s overall camera experience. 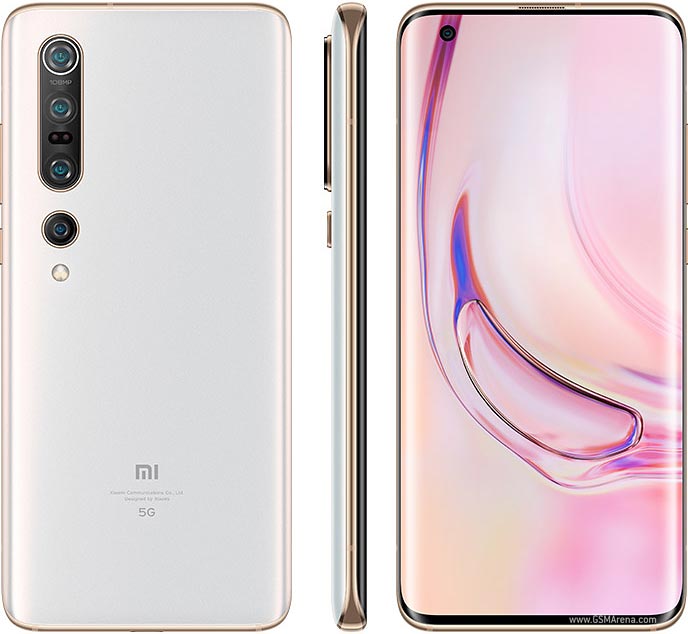 The OnePlus 8 Pro‘s predecessors are still worthy alternatives to the 8 Pro. Depending on the market, the 5G version of the OnePlus 7T Pro (McLaren Edition @ T-Mobile in the US) is just as expensive as the 8 Pro’s entry price, but if you’re looking for a much cheaper option, the OnePlus 7 Pro is a great smartphone that’s aged very well over the last year.

It can be found around half the price of the 8 Pro, which is a nice trade-off if 5G isn’t a priority. The 7 Pro was one of our favorite smartphones of 2019 around the office. 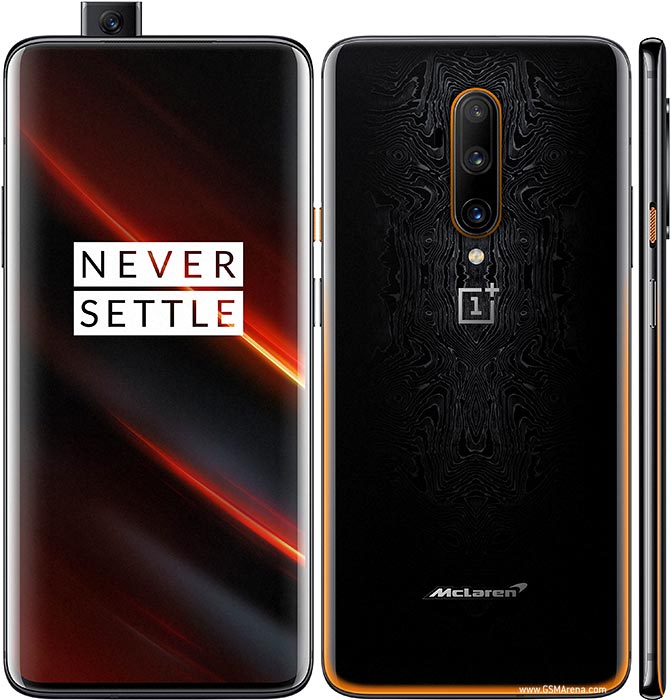 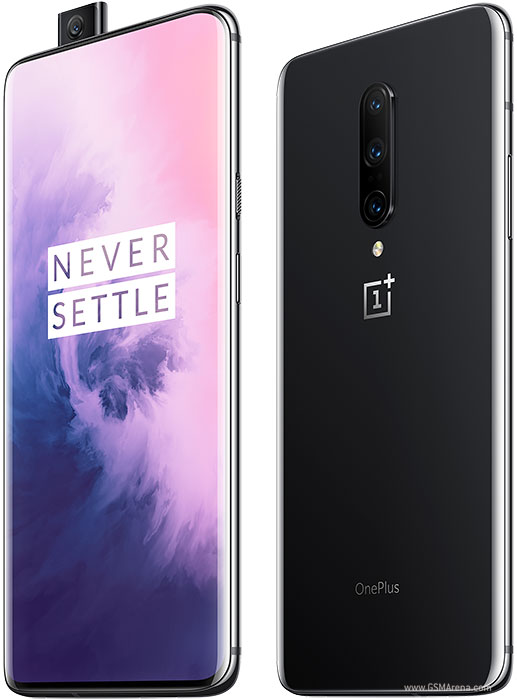 The OnePlus 8 Pro is now a fully featured flagship worth a pretty penny. This is certainly a departure from OnePlus‘ original image of high-performance for low cost. With every passing iteration, OnePlus continued to build on its previous device’s success and even if it did sometimes hype our expectations, it has consistently improved in many areas throughout the years.

The OnePlus 8 Pro is a solid smartphone packed with a well-improved camera and all the top features that you’d expect from a flagship like reverse wireless charging, stereo speakers, and a top-of-the-line display with 120Hz refresh rate. Top performance from the Snapdragon 865 and 5G connectivity are must-haves in this space, but where OnePlus is no longer competing is in the very space it began.

OnePlus is a perfect example of the notion: “if you can’t beat ’em, join ’em,” and this is exactly what the company has done with the 8 Pro. It’s managed to become the very thing the company initially set out to defeat. It did call its phones “Flagship killers” for a while. These days, there is so much more competition in the category that OnePlus first started in, that it would rather compete at the flagship level with the big boys.

And they have succeeded in this endeavor. The OnePlus 8 Pro is a high-end smartphone worth considering. The company’s attention to detail in software, packaging, and design make their brand worth being a fan of.