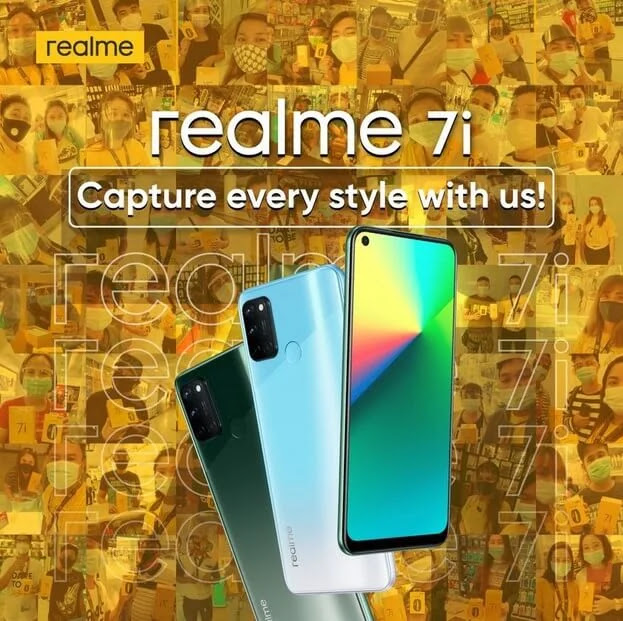 Realme has been churning-out handsets at breakneck pace since its inception with the budget segment its happiest hunting ground. Hot on the heels of the new Narzo 20 trio – 20A, 20 and 20 Pro, Realme also decided to refresh its number series the Realme 7i.

As the “i” suffix suggests, the Realme 7i is a slightly toned-down version of the vanilla Realme 7. In this case, the Asian Realme 7 variant is a closer match than the Global Realme 7 due to the shared 64MP Quad-Bayer camera.

Realme 7i specs at a glance:

In order to reduce the price of the Realme 7i, some hardware cut-backs naturally had to be made compared to the vanilla Realme 7. These notably include a slightly slower chipset, though one that does not sacrifice on modern connectivity, like Dual-Band Wi-Fi ac, but does cap video capture resolution at FullHD.

Screen resolution is bumped down to HD+, but the 6.5-inch display diagonal and the trendy 90Hz refresh rate have been preserved. And the last major bit is probably charging speed, which is set at 18W on the Realme 7i, compared to 30W on the Realme 7.

An 8GB RAM version, with 128GB of storage is said to exist as well, but we can’t really find it in the wild. The storage is of the UFS 2.1 variety, though, which provides a boost. In terms of raw performance, this definitely falls behind the MediaTek Helio G95 inside the vanilla Realme 7. Same goes for the Realme Narzo 20 Pro, also based on the G95, as well as the Realme 7 Pro and its Snapdragon 720G and the vanilla Realme Narzo 20, rocking a Helio G85.

Not unlike the recent Narzo 20 family, the Realme 7i runs on the company’s realme UI 1.0 out of the box.

It is built on top of Android 10 and our unit was still rocking the slightly older August 5 security patches.

Realme UI isn’t shy about its AOSP influences. We can’t complain either, since it manages to remain rather clean, despite having more options than most other custom Android skins. The Realme 7i even uses Google’s AOSP Phone and Messages apps.

The default icons are also very AOSP-like. Same goes for the notification shade and quick toggles area, as well as the recent apps interface.

Realme UI uses a conventional app drawer by default. Some of the noteworthy preloaded apps include Realme PaySa and Realme Link.

The app drawer is just an option in Realme UI, though. If it’s not to your liking, you can easily switch to a home-screen only based navigation model instead. Plus, an extra simple mode provides nifty versatility for older folks or remedial Android users, through its use of fewer and bigger UI components. Navigation can also be heavily customized, including quite a few gestures and things like an assistive ball.

Game Space is a nifty portal that has all of the expected distraction-avoidance options well covered. This includes muting calls and notifications. There are also some performance and battery tuning options thrown in the mix, so you can try to either squeeze-out a few extra frames or longer playtime from the modest hardware of the Realme 7i.

Finally, there is the realme Lab menu, where the company tends to offer upcoming features for early beta testing to end users. Realme is constantly working on new things.

The Realme 7i offers a rather unorthodox set of features and has an interesting position within the company’s current lineup. On the one hand, it is obviously an attempt to bring most of the important features of the vanilla Realme 7 at a lower price point, without really sacrificing too much. With a starting price of INR11,999 ($165/€140) for the 64GB variant and going up to INR12,999 ($175/€150) for the 128GB one, they clearly got the budget part of the equation right. Mind you, you still get a quad main-camera setup on the back, as well as the trendy 90Hz refresh rate on the panel. With a certain demographic the latter might make a a more tangible difference in perceived smoothness and responsiveness than a higher-end chipset, which Realme chose to forego.