like most high school seniors, Elle Smith hasn’t had the year they imagined. Prom was cancelled. A graduation ceremony is up in the air. But one thing Elle hasn’t compromised on is weekly virtual meetings of their Austin, Texas, high school’s Genders and Sexualities Alliance, a club for LGBTQ students and allies to come together and find community. Elle restarted the club their freshman year and has led it ever since.

“Not everyone has a safe and supportive family situation,” Elle explained. “We’re all missing out on a lot of different life events. It’s about honoring the changes in people’s lives, and marking the milestones we want to mark, while still being safe. We’re trying to make sure that students have access to fun and relaxation, too.” 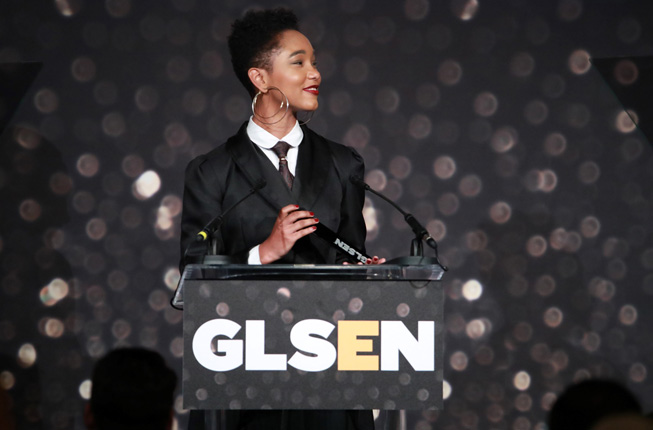 Elle Smith was honored as GLSEN’s Student Advocate of the Year last fall.

It’s this commitment to community and advocacy that led to Elle’s being named Student Advocate of the Year by GLSEN, a US-based LGBTQ organization that has inspired and helps lead a global movement to end discrimination, harassment, and bullying in schools. GLSEN supports student advocates like Elle and provides the resources that help them change their communities, one conversation at a time.

That work is particularly important during Pride month, observed every June. Normally a time of parades and protests, organizing and advocacy, festivals and community, Pride gatherings in many places have been cancelled because of the ongoing COVID-19 pandemic. But the work done by advocates like Elle hasn’t disappeared — it’s adapted to meet an urgent need.
“Pride season is a time where it feels safer to be authentic. It’s the ideal world where you’re able to be safe, you’re able to be yourself, and you’re able to be loud,” Elle said. “I think everyone who’s involved with LGBTQ organizations has done a great job shifting our programs and outreach to a virtual format. We want to keep our momentum going and make sure everyone has access to resources just as they would have pre-COVID.”
GLSEN is just one of the organizations whose work on behalf of LGBTQ people Apple directly supports with its annual Apple Watch Pride Edition band and face collection. Apple not only aims to help users celebrate Pride in their own lives, but it also directly supports the work of organizations like GLSEN and advocates like Elle.

The Apple Watch Nike Sport Band is reimagined with the colors of the rainbow.

This year’s artfully unique Pride Edition Sport Band is joined for the first time by the new Apple Watch Nike Pride Edition Sport Band. Both are available today from apple.com, the Apple Store app, and Apple stores, and pair beautifully with new matching Pride Watch faces that are coming soon as a part of watchOS 6.2.5.
Through this effort, Apple and Nike are proud to support LGBTQ organizations doing vital advocacy and community-building worldwide, including GLSEN, PFLAG, The Trevor Project, Gender Spectrum, The National Center for Transgender Equality, and ILGA World, which brings together more than 1,500 member organizations in more than 150 countries and regions.
The new bands are available to order today from the Apple Store. The bands match new watch faces coming in watchOS 6.2.5, which we reported over the weekend.

Apple announced the new watch bands as part of a press release that highlights how this year’s LGBTQ Pride month has had to change in the light of the global coronavirus pandemic.

In normal years, communities celebrate Pride with festivals and parades. In fact, the first Apple Watch Pride band was gifted to Apple employees in 2016 as part of Apple’s official Pride March. At least for this year, events are instead taking place over the Internet.

The new bands will look great when paired with the new software watch faces which will be released as part of watchOS 6.2.5. Apple is adding a 2020 variant of the Pride face to continue the design of the Pride Sport Band onto the Watch’s display. There are also new rainbow color options for several faces, including the exclusive Nike faces.

The Pride Edition Sport Band is assembled by hand from individual strips of colored fluoroelastomer. The strips are then machine die-cut and compression molded together. This process results in subtle variations in the wavy rainbow design, making each band artfully unique.