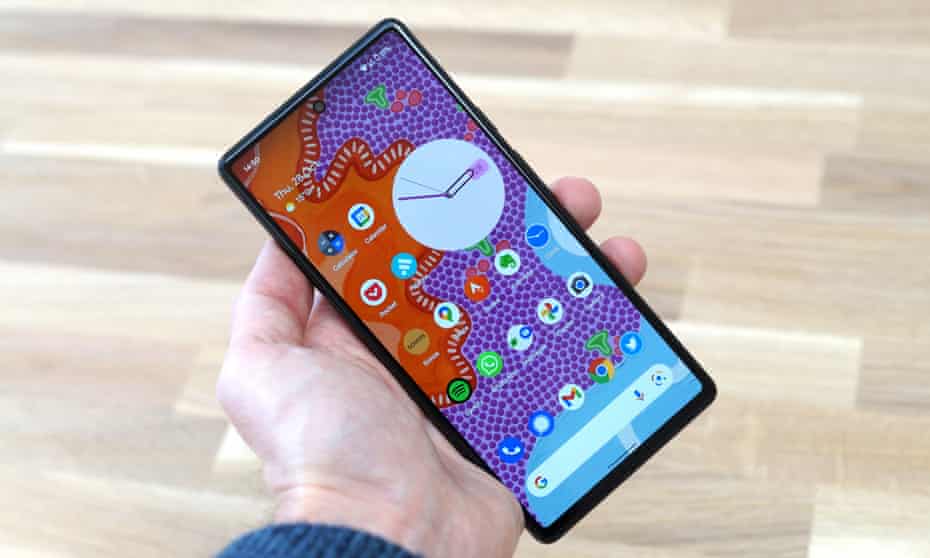 After a brief hiatus in 2020, Google returned this year to the flagship smartphone scene with the Pixel 6 Pro. But the company is no stranger to sorta flagships, and the Pixel 6 non-Pro is kinda just that if you’ll forgive our overuse of Google‘s own terminology.

In true not-quite-there fashion, the Pixel 6 omits the telephoto camera – that one is reserved for the Pro. It does get to keep the other two in that black camera strip that makes this year’s Google phones so unlike any other. Similarly, you won’t be getting the ultrawide-ish 11MP selfie unit of the Pro, but the non-Pro’s sorta wide (last time) selfie camera is good enough.

Other concessions await in the display section. Instead of the 120Hz QHD panel of the Pro, the Pixel 6 makes do with a 90Hz FullHD screen. It’s not as big either, but at 6.4 inches, the non-Pro is not a small Pixel like we had with the earlier generations – we did like those, sigh.

That pretty much exhausts the list of principal differences between the two Pixel flavors. You do get the same brand-new in-house designed Tensor chip that enables all sorts of on-device machine learning cleverness, and while the 8GB of RAM here aren’t quite the Pro’s 12GB, they sure sound like plenty. Along those lines is the smaller battery and slightly slower charging.

Google Pixel 6 specs at a glance:

Google joins in on the no-charger trend this time around, and the Pixel 6 arrives in a half-height box as has become the norm at the high-end market segment. The lid has a print of the actual phone on top, and the sides are color-matched as well – hence boring black on our review unit. 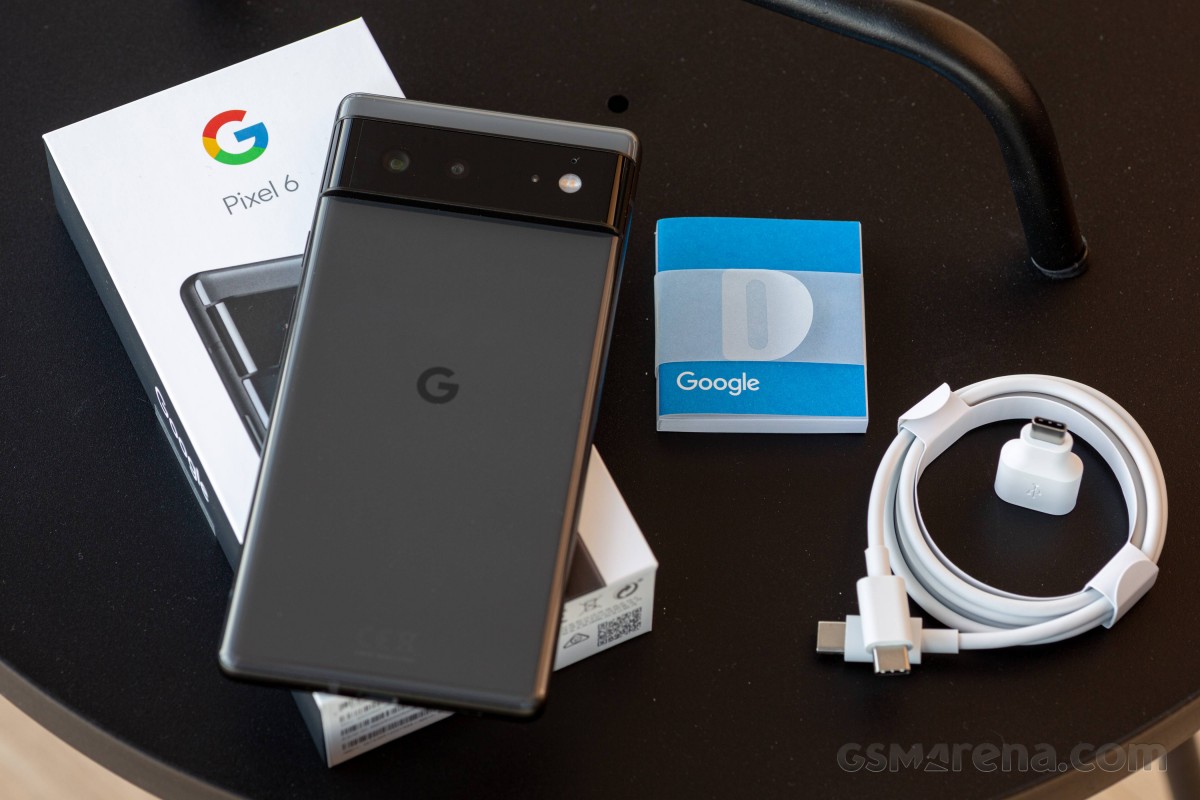 In terms of accessories, inside the box, you’ll find a USB-C cable and USB-A-to-C adapter, should you choose to plug in a USB stick or maybe transfer data from an old microUSB-equipped phone using its own cable.

The Pixel 6 Pro is the true Google flagship, and it’s that model’s job to stand up to the competition of the Pro Maxes and the Ultras of this world. The Pixel 6, meanwhile, with its more modest aspirations (and asking price) faces a crowd not quite as tough. 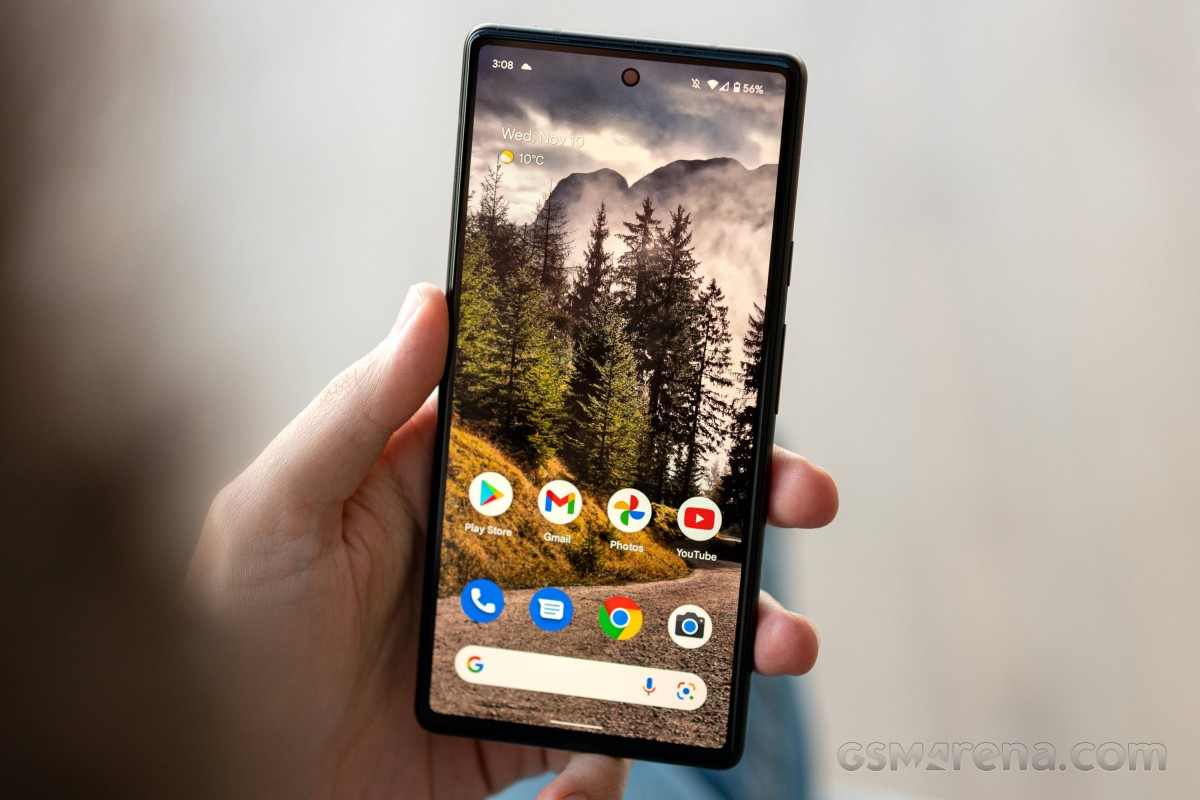 That’s not to say that the Galaxy S21, for example, doesn’t have it beat in one thing or another. The Galaxy’s display does support a higher refresh rate and, while not strictly telephoto, its zoom camera can get you better reach than the Pixel 6‘s setup, and it won’t leave you wanting with its other cameras either. The Galaxy is also an obvious choice if you want a smaller phone, offering some 40g of weight savings. The S21 is more expensive, and while a €50 premium isn’t all that much in Europe, the gap in the US is a lot more tangible at $800 vs. $600 for the Pixel. And for all that, you’d still be getting a plastic-backed Galaxy.

The Pixel 6 is at a similar price advantage in the US against the iPhone 13 ($800), but now also in Europe, where Apple charges €900 for a base version 13 non-Pro. Telephoto-challenged both of these, each will likely keep you satisfied with their camera performance, if in slightly different ways. Battery life is similar, charging slowness is comparable, displays are equally bright, though the Pixel scores a point here for its 30 extra Hertz. The iPhone is appreciably lighter if that’s a consideration. Peak Android vs. iOS is a whole separate debate in itself. Ultimately, the Pixel seems like the better deal.

Speaking of deals, the Zenfone 8 with its $630/€650-ish price tag just about qualifies as one. Another notably smaller handset, the Zenfone is for those that would have liked a mini Pixel, only to be left hanging by Google. The Zenfone has a 120Hz display and charges slightly faster, but neither is a game-changer, and there aren’t any massive differentiators when it comes to objective stuff – unless, that is, you’re a particular fan of the Zenfone’s headphone jack. It’s mostly the size that will settle this and, as with all others here, software.

The OnePlus 9 comes in at $660/€700, so a reasonable stretch if you’re okay with the Pixel’s $600/€650 MSRP. The OP comes with a couple of advantages, including way faster charging and a higher refresh rate display, which is also as big as the Pixel’s – unlike the others above. The OP isn’t IP-rated, so that’s a win for the Google phone. We’re leaning towards the Pixel altogether.

The Pixel 6 has us muttering some valid if small-ish, complaints. Competitors have largely moved to 120Hz displays, and this one is still at 90Hz, though the jump from 60Hz to 90Hz is perhaps the more visible one. Charging is slow in the grand scheme of things, but about alright in the Pixel 6’s context where that doesn’t seem to be a priority. Tensor throttles, but so do the competing high-end Snapdragon/Exynoses. And for all its tendency to pick up lint from your pockets, the camera strip on the back is a rarely interesting-looking design choice. 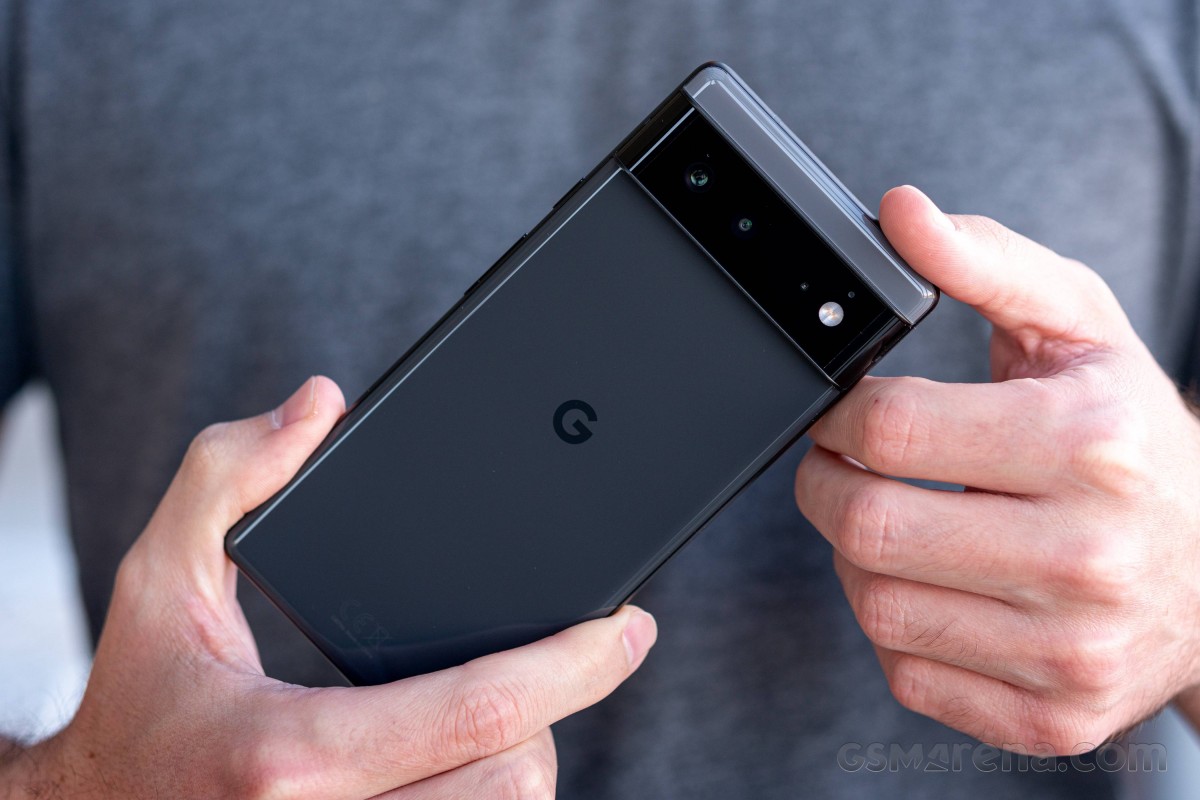 Google being a software company in the first place, it’s the Pixel’s take on Android that is a key selling point, and we’re fans of the direction it’s going with UI this year. The on-device software features enabled by that occasionally throttling Tensor are unique to the lineup and can be of real help for the right user. And for all the catching up that the competition has done in the computational photography field, the Pixel 6 remains a class-leading cameraphone – that can be appreciated by everyone.

The one truly major downside of the Pixel 6 that we can’t dismiss easily is the fact that it’s only available in a dozen countries. That’s just the reality of Google’s smartphone business and not something we see changing soon or at all. Going through hoops to import one elsewhere might require some proper motivation and justification. But if you’re in one of those countries where Google officially sells a Pixel 6, just get one.