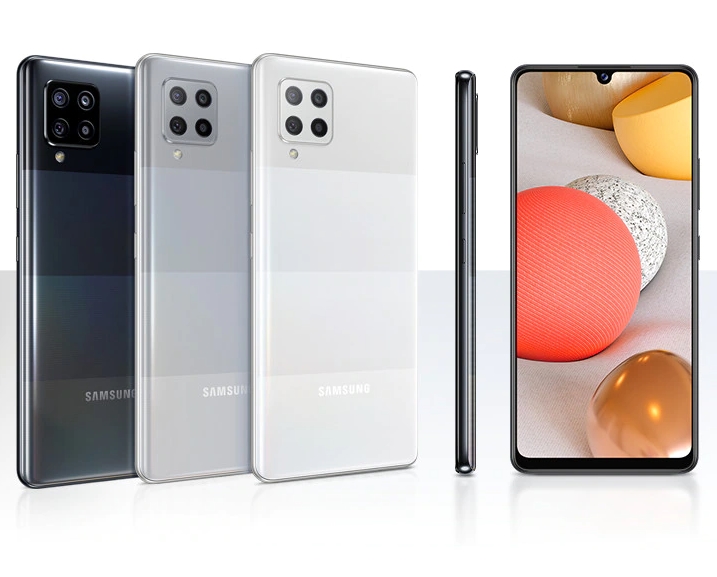 Samsung Galaxy A42 5G is one very odd smartphone. It was touted as the cheapest 5G phone and teased for weeks before its complete specs were finally outed. And it turned out the A42 has grown quite bigger since its compact A40 and A41 predecessors. Not only that but this new Galaxy A42 5G is also shaping to be an excellent gaming device with a pretty large battery at that. Yes, the Galaxy A42 5G is odd, but in a good way.

The Galaxy A42 5G doesn’t stray from the beautiful design we saw on the Galaxy A41 and comes with an even more glamorous Prism Dot look. But it is now bigger as Samsung opted for a 6.6″ Super AMOLED screen this time. Larger it may be, but the resolution has dropped to HD+, which may get some instant “ew”, but bear with us for a moment.

The latest mid-range Galaxy is powered by the 5G-capable Snapdragon 750 chip, which is a real powerhouse. And with that oomph under that HD+ display, we are looking at flagship-grade performance in gaming.

Then there is the beefy 5,000mAh battery, which can keep those gaming sessions for quite some time. The older A41 and A40 aced out battery life test with considerably smaller batteries, so we have high expectations for this one.

The Galaxy A42 5G borrows the Galaxy A41 camera setup and adds an additional 5MP depth sensor. This means you’d find a familiar arrangement on its back – a 48MP primary cam, an 8MP ultrawide shooter, a 5MP macro snapper, and the new depth sensor. The front camera is in the ballpark of the old one – a 20MP f/2.2 imager.

The A42 loses nothing since the A41 – it still offers a 3.5mm jack, an FM radio, a microSD slot, and many will appreciate the doubled storage of 128GB, UFS2.1 at that.

Let’s take a look at the specs sheet now.

Samsung Galaxy A42 5G specs at a glance:

There is only one thing we would have liked even more on such a gaming-oriented smartphone, and that’s a stereo speaker setup. We know it’s a €299 phone with 5G and all, but seeing how Poco puts some outstanding speakers, it’s not that far-fetched thing to wish for, is it?

Anyway, we just can’t wait to put this phone through its paces. So, without further ado, here is the Galaxy A42 5G unboxed.

Unboxing the Galaxy A42 5G

The Samsung Galaxy A42 5G is packed within a compact paper box. Its bundle contains a 15W charger, a USB-C cable, and one cheap-looking pair of headphones with a mic.

There is also a silicone protective case inside the box, hidden in the paper compartment that’s somewhat stuck inside the paper lid.

The Galaxy A42 5G was announced as the cheapest 5G smartphone back in September. But its specs were kept hush-hush for a month, and when it was finally launched in November, the mid-range 5G revolution was already in full swing.

The €300 Galaxy A42 5G is no longer the cheapest 5G smartphone, but it is still a very decent one. With such a powerful chipset under its HD screen, the A42 5G is easily the best gaming phone in this price bracket.

The first smartphone that comes to mind when thinking in mid-range 5G terms is the €280 Xiaomi Mi 10T Lite 5G as it is powered by the same Snapdragon 750G chipset. This one impresses with a 120Hz 1080p LCD screen, loud stereo speakers, and 33W fast charging. While it doesn’t offer a Super AMOLED, the HRR LCD screen is a nice thing to have, and if gaming performance is what you want the most – just lower the gaming resolution, and you’ll match the Galaxy’s.

The €349 OnePlus Nord N10 5G is powered by the Snapdragon 690 5G chip – quite similar to the SD750, but with a less powerful GPU. The Nord beats the Galaxy with a 90Hz 1080p screen, stereo speakers, and faster charging, but its gaming performance isn’t a good match. And since this Nord is €50 more expensive than the A42, we’d go for the latter.

Finally, let’s mention the €380 Galaxy A51. It’s pretty much the Galaxy A42 but with a higher-res screen. If the screen resolution bothers you, but you want a Super AMOLED screen, this is an excellent alternative.

The Galaxy A42 5G is a cheap 5G mid-ranger, which excels in everything it does – gaming, browsing, multimedia, office apps, and whatnot. It has a large AMOLED screen and a beefy battery to keep whatever you are doing for quite some time. So, yes, the Galaxy A42 5G seems like a great chap.

It’s not the cheapest or the best offer in this class, though. Xiaomi and Realme sell similar phones but with high-res and high-refresh screens, priced less at that. They can’t offer an OLED panel, and the only way to match the Galaxy A42 in games is to manually lower, if possible, the games’ resolution.

In fact, that’s the most important question you should answer for yourself if you are getting a €300 5G phone for gaming – do you want to tinker with settings for every single game, or will you be alright with a great performance on this natively 720p screen, an OLED at that?