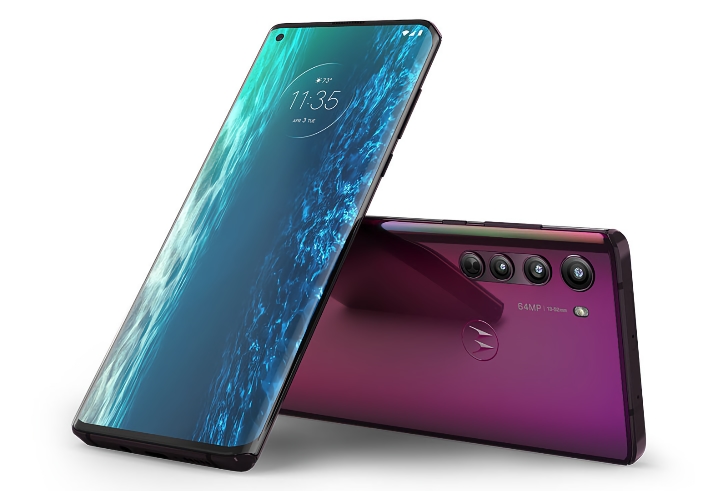 The Edge series is Motorola‘s return ticket to the major league. The company gave up making flagships some three years ago. The Moto series remained focused solely on budget and mid-range devices. Until the Motorola Edge duo came to be.

The vanilla edition of the Motorola Edge seems nicely balanced and it may as well earn a place among the renowned flagship killer niche, while its Edge+ sibling is a full-fledged flagship, complete with the premium price tag.

So, the Motorola Edge, one very curved smartphone by the name and the looks of it, features a large OLED with steep slopes, topped with 90Hz refresh rate. The selfie cutout is quite small, and we are already intrigued by the panel for sure.

The vanilla Edge is still cutting edge when it comes to the choice of chipset. The Snapdragon 765G is one of the most recent mid-range Qualcomm chipsets and it’s got promising performance, as well as 5G connectivity.

The chipset is one of the major differences between Edge and Edge+ – the more expensive Plus model comes with the flagship Snapdragon 865 chip instead. The storage is also of a different kind – UFS 2.1 on the Edge vs. UFS 3.0 for Edge+ – but a sort of a silver lining is that only the regular Edge offers a microSD slot.

Finally, the quad-camera on the back is worthy of a flagship even if there is no OIS on either of snappers. There is a 64MP primary, a 16MP ultrawide, an 8MP tele for 2x zoom, and a 3D ToF camera.

Typically for Moto, the Edge comes with a handsomely sized battery and stereo speakers. It also offers a 3.5mm jack – a rarity nowadays, and it runs on vanilla-looking Android 10 with promised major updates for the next 2 years.

The only thing we are missing on this spec sheet is the rated water and dust resistance. The Motorola edge has P2i water-repelling coating on its internals, but so do much cheaper Moto phones so perhaps IP67 would sit better with the target audience. Well, the Moto Edge is priced reasonably, so it deserves a pass for that.

The Motorola Edge comes in a stylish black box that contains the 18W charger and the USB-C cable. Inside you will also find in-ear pair of Moto headphones.

If you look inside the top paper compartment, you will find a thin silicone case to go with your new Motorola Edge. Because of its curved screen, there will be few, if any, third-party case makers, so we appreciate the bundled accessory.

The Motorola Edge is a long overdue step forward and breaks ground for future premium mid-rangers and flagships. Sure, the Edge doesn’t have anything we haven’t seen before – the screen included – but it is a breath of fresh air after a long streak of not very inspiring budget phones.

The Motorola Edge has the right screen and hardware for gaming and the battery to keep doing that for a long time. Its camera kit is quite good, too, and shows real potential in daytime. We were also happy to find a few hard-to-find features – the audio jack, the memory expansion, and the FM radio.

The design of the Motorola Edge is, well, edgy, and we think it will spark some controversy. But we are convinced this particular design feature will be one of the phone’s biggest draws. Along with the attractive pricing, of course.

Granted, the Motorola Edge is not without its faults – most of them fixable. The zoom camera should save photos in its native resolution, and then Moto has to come up with better low-light processing. The popular streaming services should start streaming hi-def content as they do for the Moto Edge+. Overall, there’s nothing a software update can’t easily resolve.

The first alternative that comes in mind is the brand-new Samsung Galaxy A71 5G. It costs the same as the Motorola Edge, has a similarly large Super AMOLED, and matches the Edge’s performance. The A71 lacks a zoom camera but on a positive note – it charges faster.

The OnePlus 8 is probably the biggest threat to the Motorola Edge. The new OnePlus 8 has a similar 90Hz OLED screen, runs on the flagship Snapdragon 865 chip, and recharges much faster. The camera on the back is less impressive and can’t do 2x optical zoom but has OIS and performs much better at night. The OnePlus 8 is €100/$100 more expensive, so it is not an easy pick for sure.

The Mi 10 5G also impresses with the fastest chip on the market plus it does an excellent job at night with its main camera. Then again, the Mi 10 5G has no zoom camera, and it costs €200 over the Edge. Not the best deal for sure.

Finally, the Realme X50 Pro, where available, costs €600 – the same as the Edge. It tops the Edge with a faster Snapdragon 865 chip. It’s got a similar camera on the back but with superior low-light performance. The X50 Pro also brags with a dual-selfie cam, but quite a few screen pixels had to go because of it. Still, the X50 Pro makes a good case, but its limited market availability along with the fact that it comes from a relatively unknown challenger brands puts it at disadvantage.

Even with its omissions, the Motorola Edge is shaping as one of the hottest deals of the season. It has the performance, the battery, and the camera to go with its great looks. It also runs Android 10 buttery-smooth on the 90Hz OLED, so there is a lot to like.

The vanilla Edge is great on that price, and we do recommend it. Motorola‘s recent sabbatical from the upper mid-range tier could be the only thing standing in the way of the new Edge series. The company has to convince consumers it’s got what it takes to make a great high-end phone. The Motorola Edge is certainly a nice step in this direction.

Fast Xiaomi Mi A3 Screen Repair in Sydney – Video Inside – On The Spot Replacement ❤ OnePlus 8 and 8 Pro updates: Bitmoji AOD and more feature in August patch