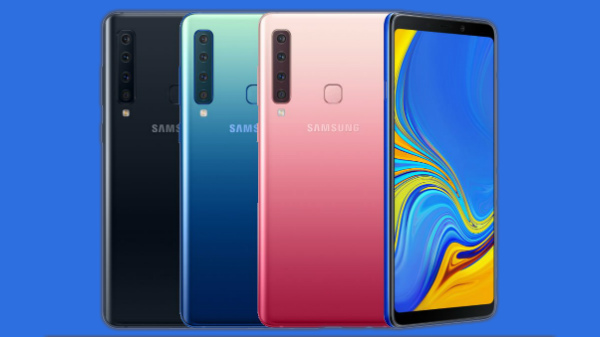 One of the first phones with five cameras on board and, several months after the announcement, still the only one with four on the back – it’s the Samsung Galaxy A9 (2018). We set out to discover how well the impressive specsheet translates into real world performance.

Sitting on top of the ever-confusing Galaxy A-series, the A9 leaves no doubt it’s the best-equipped of the bunch. Of course, it’s got more cameras than any other – it adds a telephoto module to the A7’s regular/wide/depth configuration. There’s ‘only’ a single cam on the front – the 24MP selfie shooter doesn’t get a depth sensor of its own.

It’s not just the camera count that sets the A9 apart from the rest of the 2018 midrange Galaxy models – it’s also got the most powerful chipset. Its Snapdragon 660 outclasses the Exynos chipsets of its lesser brethren and only falls short of the recently announced A8s (which lacks a year designation, so it doesn’t really count).

The largest display of the A-series is also to be found on the A9 (2018), its 6.3-inch diagonal only bested by that pesky A8s that came out as we were doing the A9’s review, so we had to reword stuff here and there. Anyway, the A9 (2018) feature set continues with more RAM than you could possibly need, 128GB of storage that you can also expand with a dedicated microSD slot, and ample battery capacity complete with Samsung’s sort-of fast charging – yup, the A9’s spec sheet has all the right boxes checked.

Well, we would have preferred Android Pie instead of last year’s Oreo, but in a world where the Note9 doesn’t have v9.0 of the OS yet, and the S9 only got it as a post-Christmas present, we didn’t actually expect it of the A9, of all models.

And while we usually avoid thinking in price-vs-performance terms before evaluating a phone on its merits, the number Samsung is asking for the Galaxy A9 (2018) raised a few eyebrows around the office as soon as the phone got in through the door. We’ll be quick to go over the lab test results, but not before we have a look at the A9’s design.

The Galaxy A9 (2018) is immediately recognizeable – after all, there’s no other smartphone with 4 cameras on the back, as we established. The quad-cam array is positioned in the top left corner and is remarkably less intrusive than we would have thought – or is it just us getting used to multi-camera setups?

The four modules are arranged in a row, instead of a 2×2 square and it’s perhaps this setup that makes them less in-your-face. It also helps that they all peek at you from one shared window instead of, say, Huawei’s 2+1 configuration on the P20 Pro. Even so, Samsung didn’t find room in there for the flash and it’s outside of the camera cluster.

Instead of the Galaxy A7 (2018)’s one-off side-mounted fingerprint reader, the one on the A9 is placed more conventionally on the back. If you’re switching from a smaller phone, this reader may seem a bit high, but if you’re coming from another 6+-inch phone it’s exactly where you’d expect it to be. A word of praise to Samsung for having no text other than the company logo to spoil the look of the back.

The front is very clean too – the 6.3-inch Super AMOLED takes center stage, naturally, with thin sides and meatier, though not excessive, top and bottom bezels. Samsung still calls it Infinity Display even though it’s less ‘infinity’ than on the S9s and the Note9s of this world. Some folks will prefer it that way – if you’re into large screens, but like them flat, the A9’s the way to go in Samsung’s lineup.

The top bezel houses the usual elements you’d expect to find there. The earpiece is in the middle, the selfie camera is to its right, while the ambient light and proximity sensors share a cutout on the left. There’s nothing below the display.

The Galaxy A9 (2018)‘s frame is made of metal, keeping together the glass sandwich. Down on the bottom, there’s a USB-C port (we still can’t forgive Samsung for pairing the A7 with a microUSB port in 2018), a good old 3.5mm jack, the single loudspeaker, and the primary mic.

Up top you’ll find the secondary mic pinhole and the card slot. That card slot is our favorite type – it takes two nanoSIMs and a microSD card, so you’re not forced to choose between dual SIM versatility and extra storage.

Samsung’s messed things up a bit with the control scheme on the A9 (2018) and moved the volume rocker to the right, above the power button. It used to be a given that your Samsung will come with a power-on-the-right-volume-on-the-left setup, but that’s no longer the case. There still is a button on the left of the A9 – that one’s for Bixby. Even though we find the arrangement unorthodox for a Galaxy, we had no issues with actually using the buttons, so the above are just pointless musings. The click action is good too.

The Galaxy A9 (2018) measures 162.5x77x7.8mm, which is about right for its display size. The 6.4-inch Note9, in fact, has a marginally smaller footprint, but its curved screen helps with the numbers. And then the A9 is actually a full millimeter thinner than the flagship. The A9 (2018) is also reasonably light for the combination of display size and battery capacity, and its 183g won’t be a burden on your jeans pocket.

A large-screened smartphone with upper mid-range internals and a bunch of cameras – who else makes those? Practically everyone, though as we’ve established, not one of them can beat the Galaxy A9 (2018) for the sheer number of its rear cameras. Then again, having many cameras on board hasn’t translated into great image quality for the Galaxy, so let’s explore what other options you can get for the same amount of cash.

The OnePlus 6T is the first that comes to mind. Just like the A9, it has one useless camera on the back, but the one that it does use, it uses a whole lot better than the Galaxy. It’s also got a more powerful high-end chipset and overall more streamlined software experience.

The Pocophone F1 caused quite the stir and for a reason – it packs some flagship-grade internals at a fraction of a flagship’s price. It’s also a lot cheaper than the A9, and it also has the Snapdragon 845 of the OP6T, which easily beats the A9’s 660. And the Pocophone isn’t really behind this particular Galaxy in any meaningful way either.

Now, if you want some of that actual flagship feel, the Huawei P20 Pro can be had for about as much as the Galaxy A9 (2018), and it is a superior phone all around, particularly in the camera department where the A9’s chops lie on paper.

The curious thing, however, is that you could be getting a better phone while remaining loyal to Samsung and without spending much more than you’d shell for the A9. The Galaxy S9+ is a couple of months from its due replacement and depending on where you are, deals are to be scored any day now.

Conceptually, the Galaxy A9 (2018) shows the direction the industry is headed – single device, all the cameras. In practice, however, it’s precisely these cameras that let it down. Of course, we can’t expect Samsung to make a better cameraphone in the midrange than its current top models, but the A9’s image and video quality is as if it’s coming from another era and it’s not the future we are talking about.

Which is sad, because it’s otherwise a capable phone. All the rest of the important stuff is there – a high-quality display, battery life to spare, a powerful chipset, more RAM and storage than you know what to do with – these are all covered. You know, except for the camera.

The prohibitively high price doesn’t help its case either. We’d understand it if there were no major dealbreakers, but with a camera like this, it’s not really so, is it?

Let’s put it this way – if you’re after the bragging rights for having the world’s only quad-rear-cam phone, well, the Galaxy A9 (2018) is the rather obvious choice. But if you are after taking nice pictures with your phone regardless of the number of cameras it has – well, there are better options out there.