After testing for some time, YouTube Music is finally bringing the song/video switcher to the Now Playing UI of the web client.

Just above cover art is the Song and Video switcher that has been a staple of the Now Playing screen on Android and iOS.

There are two primary use cases for this switcher. The first is switching between the official music video and the album version of a song, as evidenced by cover art appearing in the latter instance. Your playback position is retained when switching. The switcher appears grayed out when songs aren’t available as videos.

The other use is disabling the video aspect of a live recording, which just uses the thumbnail as cover art. It’s useful for those that just want to listen to audio, with users previously resorting to minimizing Now Playing at the expense of being able to see the Up Next queue. 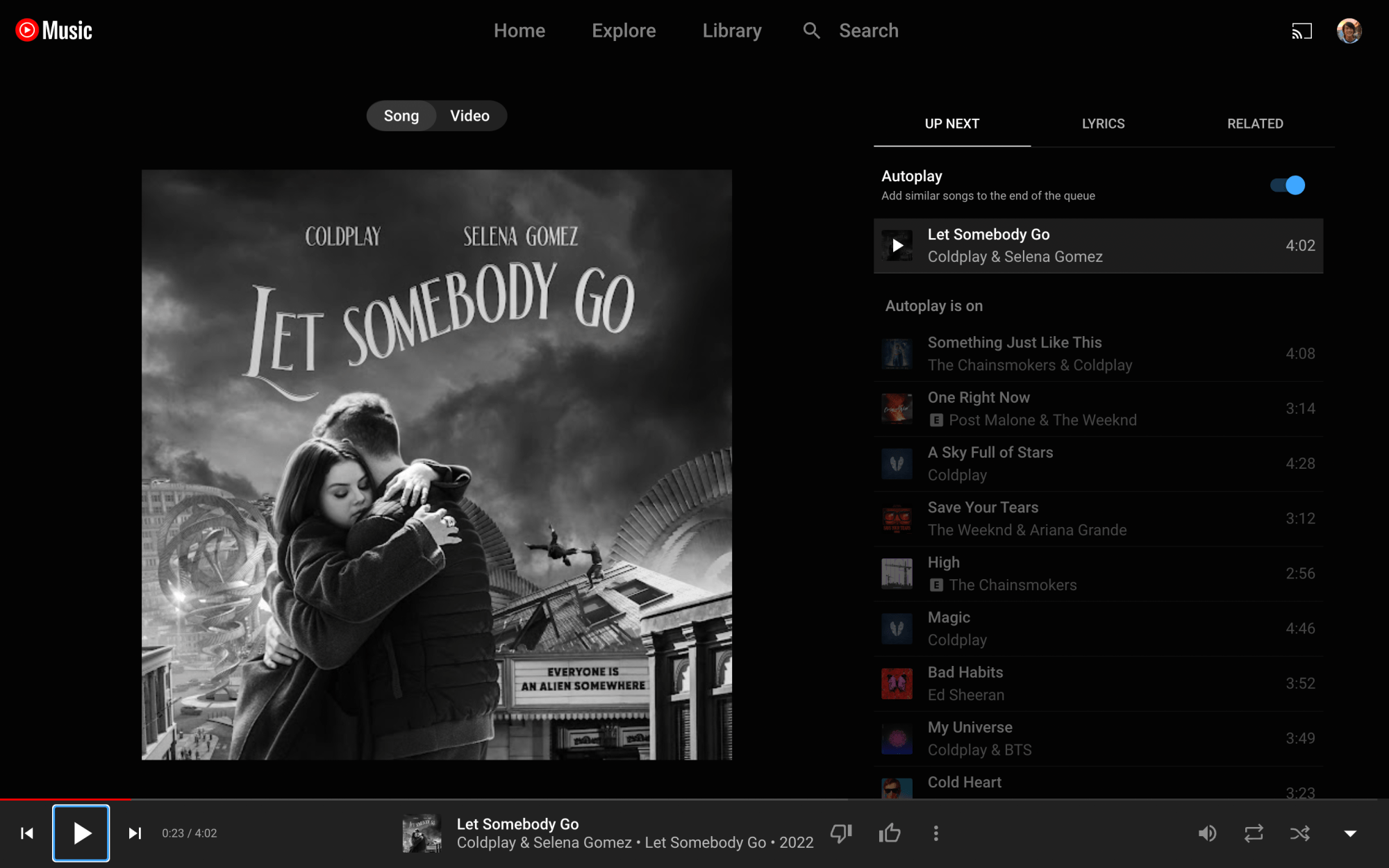 YouTube Music has been testing the switcher for some time on the desktop, but it looks to be widely rolled out today. It’s another example of the web client getting feature parity with the mobile apps, while the Related tab was introduced in recent months.

Google should also theme the background of Now Playing to album art instead of defaulting to just a dark background. This was previously spotted but never widely rolled out.

After rolling out a redesigned “Add to playlist” UI, YouTube Music is adding a “From your library” section to artist pages that is similar to something that was found in Google Play Music.

It’s third from the bottom and just below the “Videos” carousel. Up to five songs or albums are listed with “See all” in the top-right corner. That button takes you to a list of just tracks. There’s a convenient “Shuffle all” button, while sort options include Release date, Recently added, A to Z, and Z to A.

YouTube Music’s Library essentially lets you save media for quicker access, but it does not include songs you’ve manually uploaded. This new grouping joins the Albums, Songs, and Artists views, while “From your library” also exists as a carousel in the Home tab.

The From your library section in artist pages is widely rolled out today on YouTube Music for Android and iOS. However, it’s not currently found on the web, and would ideally be ranked higher up in the page. In all, this new feature is similar to “My Library” in Google Play Music.

Starting next month, YouTube Music is getting free background listening in a major revamp of the streaming service’s ad-supported tier. As part of that, the YouTube Music app is going audio-only and will no longer play videos if you don’t pay for Premium.

With background play, the application will keep streaming music when it’s no longer open or your screen is off. This previously required a paid YouTube Premium (or Music Premium) subscription. Today, those that don’t pay can watch videos found in the Home and Explore feeds, as well as search. They cannot, however, use the seamless “Song/Video” switcher at the top of the Now Playing screen.

To balance the upcoming change, free YouTube Music users will no longer be able to watch music videos in the app. This is becoming a YouTube Premium perk as Google shifts YouTube Music for free users to be an audio-only experience. Users are advised to use the main YouTube client for their regular video-watching.

This change starts on November 3, when free background play rolls out. It’s first coming to Canada with “global expansion plans” not yet detailed. Google confirmed to us this change to videos in YouTube Music, while a help post lays out the new tiering system.

That that don’t pay for YouTube Music (and see an “Upgrade” tab” in the bottom bar) can:

It comes as Apple Music on Monday introduced a cheaper “Voice Plan.” As per usual, Google and YouTube are just combating that with a free “radio-like” tier that is supported with advertising.