The Synesthesia Suit will make your body feel VR

If you think that VR is not yet fully immersive, then you can stop thinking that way because the Synesthesia Suit can now fully immerse your body in VR.

What is a Synesthesia Suit?

If you’re wondering if you can use this suit with any virtual reality game you want to play with it, then you’re out of luck. The “Synesthesia Suit” was created to embody the multi-sensory concept behind the VR (virtual reality) video game “Rez Infinite”. There are 26 actuators that will vibrate throughout the person’s body in tune with the music and, you won’t see it with your headset on, light up via LED lights.

There’s a special touch to the vibrations. You’d know if it’s a drum or a stringed instrument that’s making it vibrate. Of course, the lights are simultaneously controlled in this same manner all throughout the Rez Infinite areas.

This multimodal suit allows the person to experience music not just through its ears but also through the senses of touch and sight. 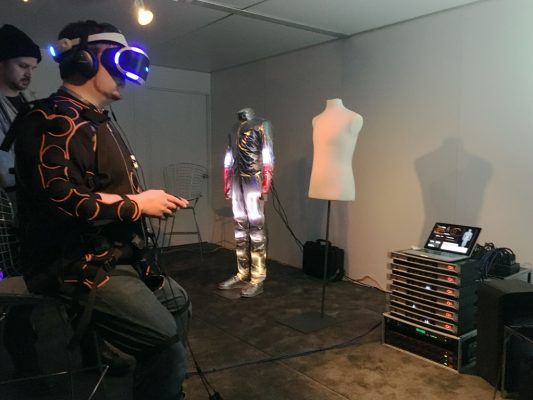 Synesthesia Suit is mainly developed to make players fully be immersed in Rez Infinite VR games. Once the suit is on, it will vibrate once a player touches any virtual objects within the VR world.

How did the Synesthesia Suit came to be?

Rez Infinite game designer Tetsuya Mizuguchi made the Rez Infinite one of the best game for the PlayStation VR like what it is with the HTC Vive.

Mizuguchi even stated that when he originally made the Rez 15 years or so ago, he imagined it played in VR. At first the game did not satisfy him because it was just 720p saying, “It was HD, but not true HD.” It was when the virtual reality industry started growing that it brought him back to games. This made the Rez Infinite with higher resolution compared to what it had when it first came out.

Rez, originally released in 2001 on Dreamcast and PlayStation 2, is a brilliant combination of shooter gameplay, music, and light, sort of like turning Space Invaders into a rave where everybody is on just enough drugs that they’re pretty sure they can smell the music. It’s had a significant cult following since then, with an HD version on the Xbox 360. Rez Infinite will bring the game to PlayStation 4, with an optional VR mode, in 2016.

The Synesthesia Suit, which Mizuguchi also developed is primarily for his own academic research. Being a professor at Keio University, he is teaching about next generation 0transmedia projects, yes, like Rez in virtual reality.

It is a full realization of an idea Mizuguchi’s been kicking around for 15 years. “Having the synesthesia suit come to life is something I’ve always wanted to be able to do,” he says.

Watch how the Synesthesia Suit works with PlayStation VR