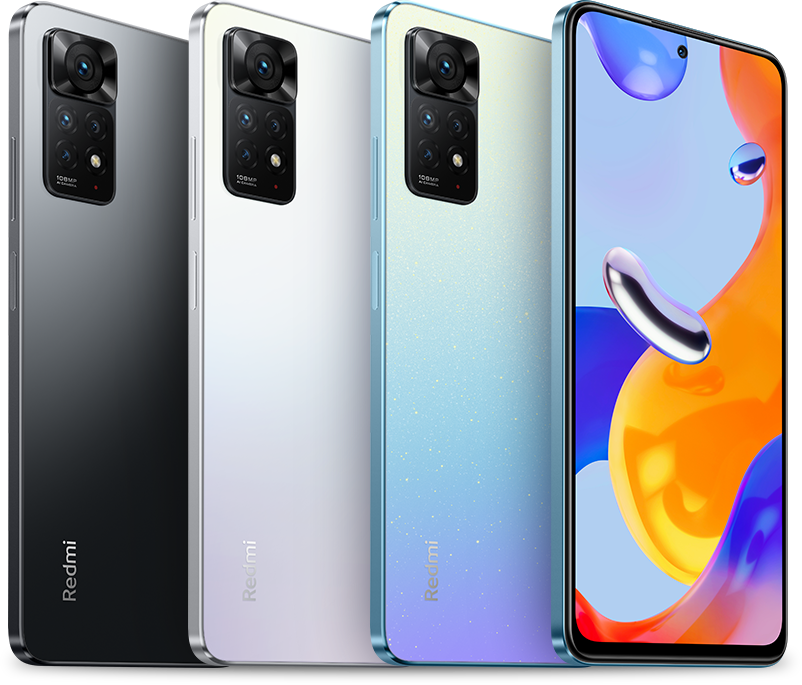 The entire Redmi Note 11 lineup is already available for purchase, and they all share a brand new dual-glass design, similar camera experience, improved battery charging, the latest MIUI 13, among other things. Today, we are going to meet one of the most anticipated among the new Redmi quartet – the Redmi Note 11 Pro.

So, the Redmi Note 11 Pro has a new cool-looking dual-glass design with a flat frame, flat panels, and IP53 splash proofing. It employs the same 6.67-inch 120Hz Super AMOLED that was introduced with the previous Redmi Note 10 Pro model. And it seems to be packing the same rear camera setup, too, with a 108MP primary shooter, an 8MP ultrawide, a 2MP macro, and a 2MP depth sensor. Oops, correction, it seems the macro has been demoted from a premium 5MP AF telemacro to a basic 2MP with a fixed focus.

The new Redmi Note 11 Pro runs on the Helio G96 chipset, not the fastest in the mid-range, but we will see how it fares against the competition.

The Redmi Note 11 Pro brings a ton of fan-favorite features like stereo speakers, a microSD expansion, FM radio, a 3.5mm jack, there is NFC and even an IR blaster. Like most of the Notes, this one is also powered by a large 5,000mAh battery, and its charging has been improved from 33W on the Note 10 Pro to 67W on this new Note 11 Pro. Nice!

The Redmi Note 11 Pro seems like a good sequel, though there is one big question mark – the Helio G96 chipset. It seems like a weaker SoC compared to the Note 10 Pro’s Snapdragon 732G chip, and furthermore, it’s not capable of 4K video capturing.

With that being said, let’s go and unpack this thing and put it through its paces.

Interestingly, the Note 11 Pro has no protective film on its screen, like it was with older models, but you will find one within the box. It’s always good to have basic protection out of the box, but given how challenging it sometimes is to apply these flawlessly by yourself, we would have preferred this to have been done in the factory.

The Redmi Note 11 Pro turned out to be a good all-around mid-range phone with an attractive design, powerful stereo speakers, long-lasting battery life, speedy charging, and dependable cameras on both sides. The performance, while adequate, is somewhat subpar for its class. And with all that said, let’s explore the competition.

The Realme 9 Pro costs the same as the Redmi Note 11 Pro. While it uses a 120Hz LCD screen instead of an OLED, it relies on the more powerful Snapdragon 695 5G chipset and offers much better battery life. Its interface also feels snappier, and the photo quality is somewhat more balanced.

Then there is the outstanding Samsung Galaxy A52s 5G, which is an IP67 water-resistant smartphone with a 120Hz Super AMOLED, a much faster and gaming-capable Snapdragon 778G 5G chipset, and better four-camera setup with a 64MP OIS primary, a 12MP ultrawide, a 5MP macro and a 5MP depth sensor. The front camera is also of higher quality with a better 32MP sensor. The Galaxy A52s is inferior to the Redmi Note 11 Pro only in the charging department – 25W vs. 67W, but it costs as low as €320 – the same price as the Note 11 Pro. And this makes choosing the Galaxy a no-brainer.

The Motorola Edge 20 is another smartphone worthy of serious consideration. It has a faster 144Hz OLED screen, a more powerful Snapdragon 778G 5G chipset, a premium triple-camera with a 108MP primary, a 16MP ultrawide shooter, and an 8MP telephoto with OIS for 3x optical zoom. The Moto Edge 20 has inferior battery life and charging speed but offers a more powerful hardware and software package, and it costs as low as €300. Indeed, the Edge 20 seems like another good phone to get instead of the Redmi Note 11 Pro.

Then there is Xiaomi‘s own Poco X4 Pro 5G, which is a rebranded Redmi Note 11 Pro 5G with a different design. Its 6GB/128GB version starts at €269, which is cheaper than the €300 early-bird price of the Note 11 Pro, and you get more powerful graphics and 5G connectivity.

The Poco M4 Pro is a cheaper version of the Redmi Note 11 Pro with a 90Hz display, a 64MP primary camera and 33W fast charging. For these lower specs, you will save yourself at least €100, and we’d take that deal in a heartbeat. The Helio G96 is not equipped to handle 120fps properly, and then the 108MP camera seems like an overkill.

And another Poco, the X3 GT, is cheaper at €290 and more powerful than the Redmi Note 11 Pro. It has a 6.6-inch 120Hz LCD screen with HDR10 support and employs the flagship-grade Dimensity 1100 5G chipset. It also features more RAM and more storage at that price. The rest – camera experience, speakers, battery life, charging speed – everything is exactly on the Redmi.

Finally, we see not a single reason why anyone should get the Redmi Note 11 Pro instead of the Redmi Note 10 Pro from the last year. It offers faster graphics and good gaming experience, better photo and video quality, and they come at a lower price starting at €250 for the 6GB/64GB model.

The Redmi Note 11 Pro is a good smartphone positioned thoughtfully under the Note 11 Pro 5G. It was made for people who don’t need the fastest connection in the world and can do without gaming. We are fond of its design, screen, speakers, battery life and especially, the charging speed.

Xiaomi has been consistent with its IP53-rated phones, and that’s another thing that deserves praise – Realme still hasn’t gotten there yet. The camera experience is solid, too, probably the best you can get within the entire Redmi Note 11 series.

Finally, MIUI 13 is one capable launcher with millions of fans around the world, which plays in the Redmi Note 11 Pro favor. The 3.5mm jack, the microSD expansion, the IR blaster, and the FM radio are of big help, too.

Unfortunately, the Redmi Note 11 Pro fails at two important aspects – delivering meaningful upgrades and pricing. The only upgrade over the Redmi Note 10 Pro is the faster charging, everything else feels like a solid downgrade. And then we have this phone priced quite unfavorably at launch, even with the early bird promotions.

We’ve seen Realme pushing sequels with lower-tier specs, but they often came with rather reasonable price tags. Unlike Xiaomi, which is giving us slower phones at higher prices.

At the end of the day, we can’t blame Xiaomi for trying to refresh its signature Redmi Note series at times of unprecedented global crisis. The economy is not what it was two years ago, and phones, along with everything else, is going to be more expensive. So, it’s not really the maker’s fault for what’s happening. But we think Xiaomi could have handled better these Redmi Note 11 Pro models, maybe postpone them and rethink their place in the market.