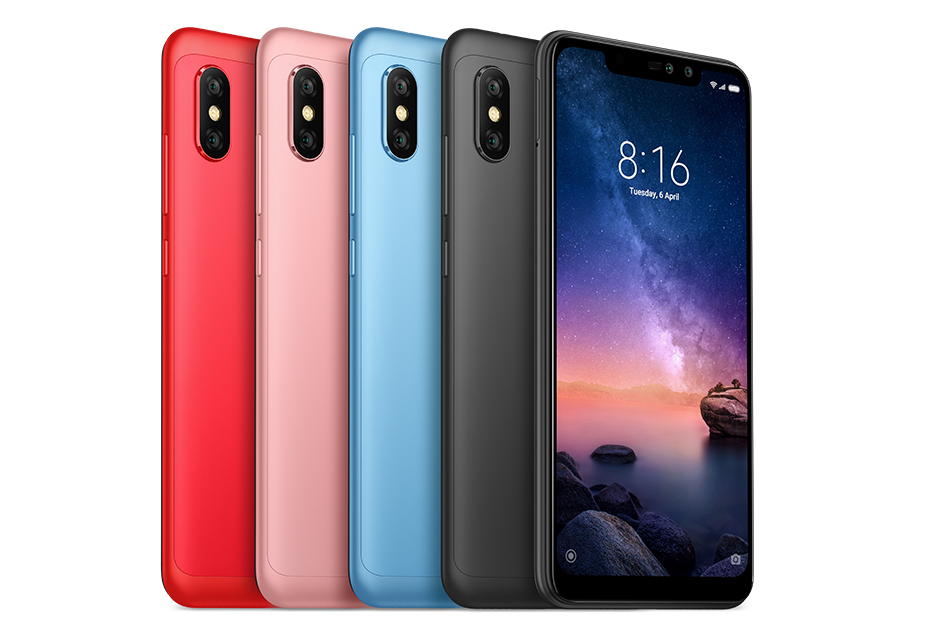 It’s been almost nine months since the Redmi Note 5 series premiered, and it’s already time for an upgrade. The Redmi Note 6 Pro is now official, shaking up the lineup with one of the most recognizable and controversial features on the market – a frame-to-frame display with a notch.

Yes, the Redmi Notes have reached that inevitable moment, where the notched screen would become the default one until something better comes to replace it. Even the cheapest of smartphones have already jumped on the notched bandwagon, so it’s no surprising to see the Redmi Note 6 Pro being the forerunner of change for the Notes to come.

Anyway, the Redmi Note 6 Pro isn’t a massive upgrade over the Note 5 Pro, but that’s to be expected given the short development cycle. The Note 6 Pro does bring a larger display fitted in the same body, but keeps the same Snapdragon 636 chipset, beefy battery, and plastic/metal design. It borrows the main camera from the Note 5 Pro AI Dual Camera edition, but the selfie photography got a boost with a new dual-camera at the front.

Let’s take a peek at the detailed specs.

We can’t think of anything that’s missing on the Redmi Note 6 Pro and it’s shaping to be one very thoughtful smartphone with great bang for the buck ratio. And now it’s time to pop this thing out of the box.

Xiaomi has bundled the Redmi Note 6 Pro with the usual accessories – a 10W charger, a microUSB cable, and a soft silicone case.

Some, or all, Redmi Note 6 Pro units have factory-applied screen protectors.

The Redmi Note 6 Pro ticks all the right boxes for a best-seller in its class and price segment. But it’s not the only one. There are plenty of smartphones with big notched screens, Snapdragon 636 chips, dual-cams, and large batteries.

The first market to officially get the Redmi Note 6 Pro is Thailand, but the Indian premiere should be just around the corner, too. And there are quite a few phones to consider before making a decision.

The Realme 2 Pro is the first device worth mentioning. It’s cheaper, more powerful (S660), and it has a much better take on how a notch should look like. The Realme 2 Pro also does 4K video recording out of the box, and its base model has more storage and RAM. Oh, and the SIM slot is not a hybrid one!

If you aren’t a notch person, then the Xiaomi Mi A2 might suit you better. All-metal design, more powerful chipset, better dual-camera, and Android One enrolment for a clean OS with regular updates. Worth the extra bucks, if you can live without an audio jack and a microSD slot.

The Asus Zenfone Max Pro (M1) ZB601KL is very cheap, doesn’t have a notch, but has the same Snapdragon 636 chip, and a good enough dual-camera on the back. It boasts a massive 5,000 mAh battery underneath the 6″ screen, which combined with the low price may tip the odds in its favor.

The Motorola One Power is a very good match for the Redmi Note 6 Pro. It packs identical screen and chipset, similar main camera, but is powered by an impressive 5,000 mAh battery. Android One is in charge of One Power, which means Android Pie is coming very soon. The Motorola is more expensive though and can’t beat the Note 6’s bang-for-buck ratio.

It’s the new Redmi Note and for the fans, this is enough of a reason for an upgrade even though the novelties aren’t that many since the Redmi 5 Pro. But the Redmis, and the Notes particularly, are becoming more attractive by the hour for users that are either disappointed by the major companies in the industry, or just tired of the high prices they are charging lately.

The Redmi Note 6 Pro has it all – great display, snappy performance, no-nonsense features, excellent battery life, and very good and hassle-free camera experience. And all this is available at an amazingly low price.