A Geekbench listing has been spotted today which mentions the Galaxy S8+ Android 8.0 Oreo update. It’s likely that tests are being performed on this firmware update as the development progresses.

In our report earlier this month, we mentioned that the Galaxy S8 and Galaxy S8+ Android 8.0 Oreo update firmware versions could be G950FXXU1BQI1 and G955FXXU1BQI1, respectively.

It’s unclear at this point in time when Samsung is going to release Oreo for this year’s flagship smartphone. It’s likely that a Samsung beta program for the Oreo update might be launched at some point in the coming weeks.

Once the beta firmware has been thoroughly tested, it’s likely that we might see it being rolled out much faster worldwide as Samsung has now started using multi-CSC firmware. That means end users will be able to get a taste of Oreo on their 2017 flagships sooner rather than later.

The Galaxy S8+ has now been spotted on Geekbench running Android 8.0 Oreo. It’s not uncommon for us to see such benchmark listings ahead of an impending major firmware release. However, it doesn’t really clarify anything.

Samsung is yet to confirm its Oreo release roadmap. Until it does that, there’s only going to be more speculation about when the Galaxy S8 and Galaxy S8+ Android 8.0 Oreo update might be released. One can only hope that it doesn’t make customers wait for a very long time. 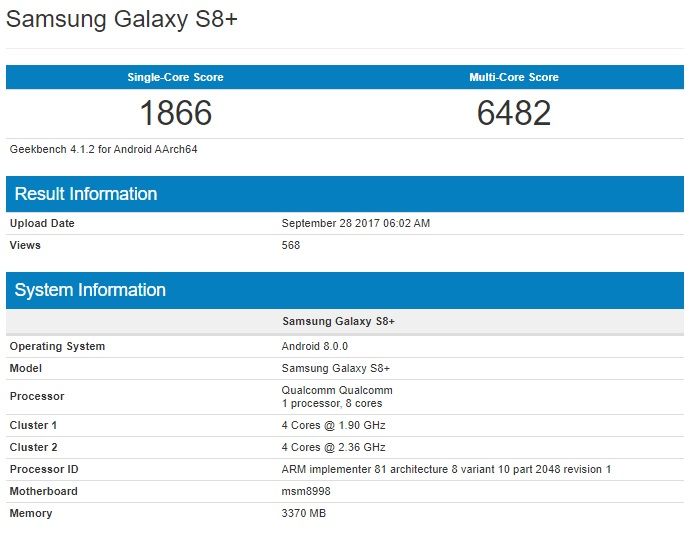