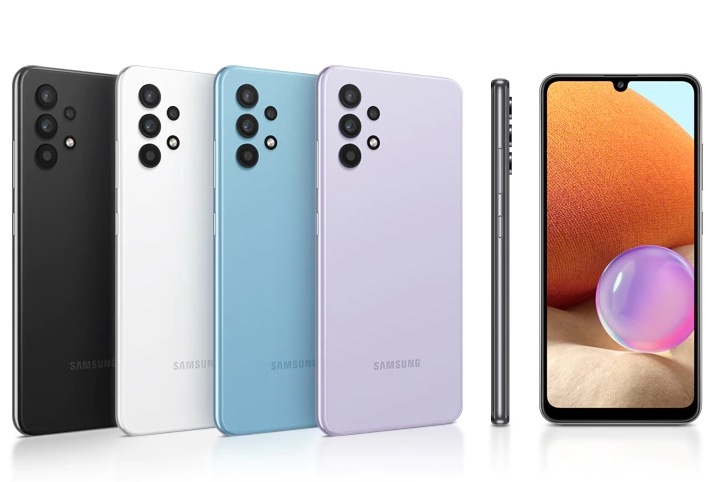 Is 4 more than 5? It’s a pressing question if you’re looking at the Samsung Galaxy A32 in 4G spec and its 5G counterpart. We have the LTE version over for review and will try to answer that question in the absence of the A32 5G, but we’ll revisit if the handset with next-gen connectivity support arrives at our door.

You get entirely different displays for starters, and the 4G’s is a lot better – a 90Hz 1080p AMOLED vs. the 5G’s 60Hz 720p LCD. The LTE version also snatches a couple of wins in the camera department with high-res main and selfie cameras. The A32 5G counters with a chipset that’s not only 5G capable, but also more powerful thanks to its newer cores.

That last bit is perhaps where the Galaxy A32 will face the biggest challenge against competitors in its just-under-€300 price bracket – you can have a lot better than the Helio G80. The phone’s imaging system isn’t too shabby, however, with a 64MP primary unit joined by an 8MP ultrawide, and a 20MP selfie camera. But it’s the display that is among the most compelling bits about the Galaxy A32 – on paper and (spoiler alert!) in practice, too.

Samsung Galaxy A32 specs at a glance:

Some smaller things that are easier to overlook but still set the A32 4G apart from its more forward-thinking brother include the under-display fingerprint sensor and dedicated microSD slot (the A32 5G’s is hybrid). Meanwhile, a shared attribute is the choice of battery – a 5,000mAh power pack that Samsung seems to have settled on as the optimal capacity for the bulk of its phones.

Another familiar sight is the Galaxy A32‘s retail package – a plain cardboard box inside a sleeve, with a likeness of the phone printed on top. The adapter inside is an old acquaintance too – the 15W Adaptive Fast Charging unit has been around since… 2014, was it? The only difference from back then is the cable, as it now has USB-C on the phone’s end.

You won’t find a headset inside this Galaxy’s box, but the phone does have a 3.5mm jack where you can plug in existing headphones. More about what’s where on the A32 – on the next page.

The Galaxy A32 in 4G spec is in a weird spot in the lineup. It obviously has no support for 5G connectivity but it has the 90Hz Super AMOLED and the 64MP camera as the key selling points, with the great battery life coming as a bonus. What else can you get at its price point of €280/£250/INR22000?

Turns out – a lot. Take, for example, the Xiaomi Redmi Note10 Pro (known as the Redmi Note 10 Pro Max in India). It one ups the Galaxy’s display by offering a 120Hz refresh rate and does so with a minimal hit to battery endurance, not to mention it charges much faster. Much faster is the Redmi’s chipset too, its camera is better (complete with 4K capture), and it has stereo speakers (loud ones too). The Indian version is cheaper than the Galaxy, but even if it were at a slight premium, we reckon it’ll still be well worth it. Price and availability for the global model are still murky, but we can’t imagine it going for over €300.

Moving on, the just-announced Realme 8 Pro starts at €280/£280/INR18000, and it’s arguably a more compelling package than the Galaxy. You’d get a beefier chipset and nicer camera (4K recording, too), plus quicker charging. Here, the Galaxy wins for display, however, with its 90Hz OLED being superior than the Realme’s conventional 60Hz one. Additionally, we can speculate with relative confidence that the Realme will be no match for the A32’s battery life.

Another brand new release, the Poco X3 Pro, is also an alluring alternative. At €250 for a 6GB/128GB configuration, it’s cheaper than the Galaxy, and comes with a flagship-grade Snapdragon 860 chipset that will run circles around the A32’s lower-end Mediatek. A stereo speaker setup and a modest but appreciated IP53 rating are both in its favor too, while the 120Hz LCD vs. 90Hz OLED is an entirely personal preference. Hardly a photographer’s dream, the Poco is about tied with the Galaxy for taking pictures (but does record 4K video).

If you’re in India, you could also look at the very popular Vivo V20 for about the A32’s asking price. The Galaxy has the better display (90Hz vs. 60Hz, brighter) and longer battery life, while the Vivo wins for charging speed and camera performance (image quality, 4K recording, AF on the ultrawide).

Despite the undeniably superb results in some areas, the Galaxy A32 has flaws that can be considered dealbreakers. The chipset is perhaps the worst offender, being too slow for the money. Likely related, the buggy Night mode can be really disappointing, and the phone underdelivers on the video recording front.

So what you’re left then is great endurance, an awesome display, and the Samsung badge. Can these make a strong enough case for the Galaxy A32? Typically, they could, but at the price that Samsung charges for this one, you can get so much more phone by giving up on the Galaxy name that we feel it’s not worth fixating on brand loyalty in this particular case.