Samsung One UI 5 based on Android 13

With rumors of the official One UI 5 beta starting soon and internal previews already underway, people are getting excited to see what Samsung has up its sleeve for Android 13. Luckily, I’ve managed to get my hands on the latest One UI 5 beta before the public beta even starts. Let’s take a look at everything that’s new in One UI 5.

To provide some context, this build was provided by a source and is not one that Samsung has released publicly, so it might not provide a complete picture of One UI 5 given the initial nature. It is an early beta that unfortunately does not have a changelog, so everything new below has been from using One UI 5 and comparing to One UI 4. 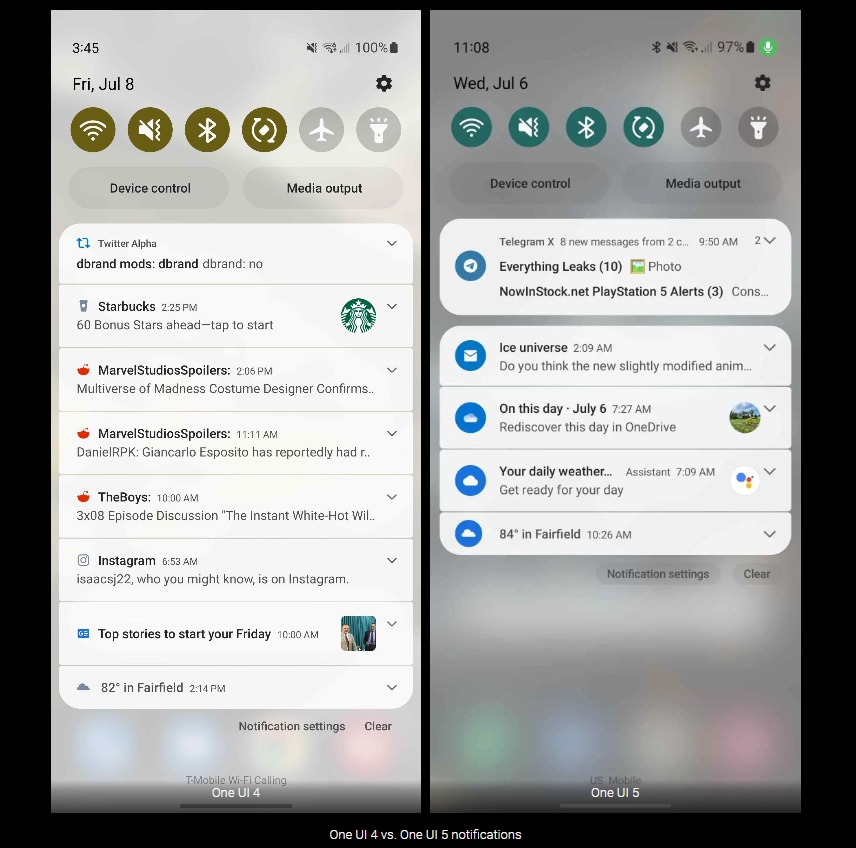 One big surprise with One UI 5 is Samsung’s choice to use the default Android permission dialogs. This is by no means a bad thing, and it is very similar to how Google does it. This could have been to help speed up the update process by not changing things that don’t need to be changed in Android, or it could just be so early Samsung hasn’t gotten to changing it in One UI 5 yet. We’ll find out soon enough in future betas.

OCR in Gallery and insert text from image in keyboard

Samsung has now added OCR (Optical Character Recognition) that lets you copy text from images to the Gallery app and keyboard. When the device detects text in a photograph, it will now have a button at the bottom of the gallery letting you pull text from the image. This used to be part of Bixby Vision, but was turned into its own feature in One UI 5.

Keyboard OCR works the same way it does on iOS. In any text field, you can select extract text and hold the camera up to anything to grab text from it and insert it. The UI on Samsung’s version is incredibly similar to iOS as well.

The security and privacy hub is a Samsung proprietary version of what Google made for Pixel on Android 13. It places all your accounts, passwords, security, and privacy features into one screen, thus allowing for easy access to everything. It will also scan for anything that might be abusing app permissions or a security setting that isn’t enabled and recommend you enable it for all around better security.

Unfortunately, there is nothing new in the hub. All of the settings and features here were also found in One UI 4, but it is good to see Samsung making access to all of this easier and being proactive about warning those who are less tech-savvy.

In Labs, there are now two options for multitasking and accessing the feature. You’ll now be able to swipe up from the bottom of the screen with two fingers to access split view or swipe in from the top right corner to make a popup window. Neither currently work in this build, but they should by the time it launches.

At the end of the day, there really isn’t much new in One UI 5. It has minor improvements across the board with an upgrade to animations. This isn’t a bad thing. It seems like Samsung is focusing on update speed, seeing as the beta is likely starting a month earlier with a planned release also being a month earlier.

Focusing on getting Android updates out there fast then bringing newer features with later updates that launch alongside new devices allows for more devices to get updates and for Samsung to focus on new features later. With promises of four years of OS updates, this is a good thing to see and a good start for the Galaxy S22s. We’ll have to see how things go for Samsung’s Z foldables, A line of phones, and Tab series of devices.