❤ Apple Watch SE : The smartwatch for the masses 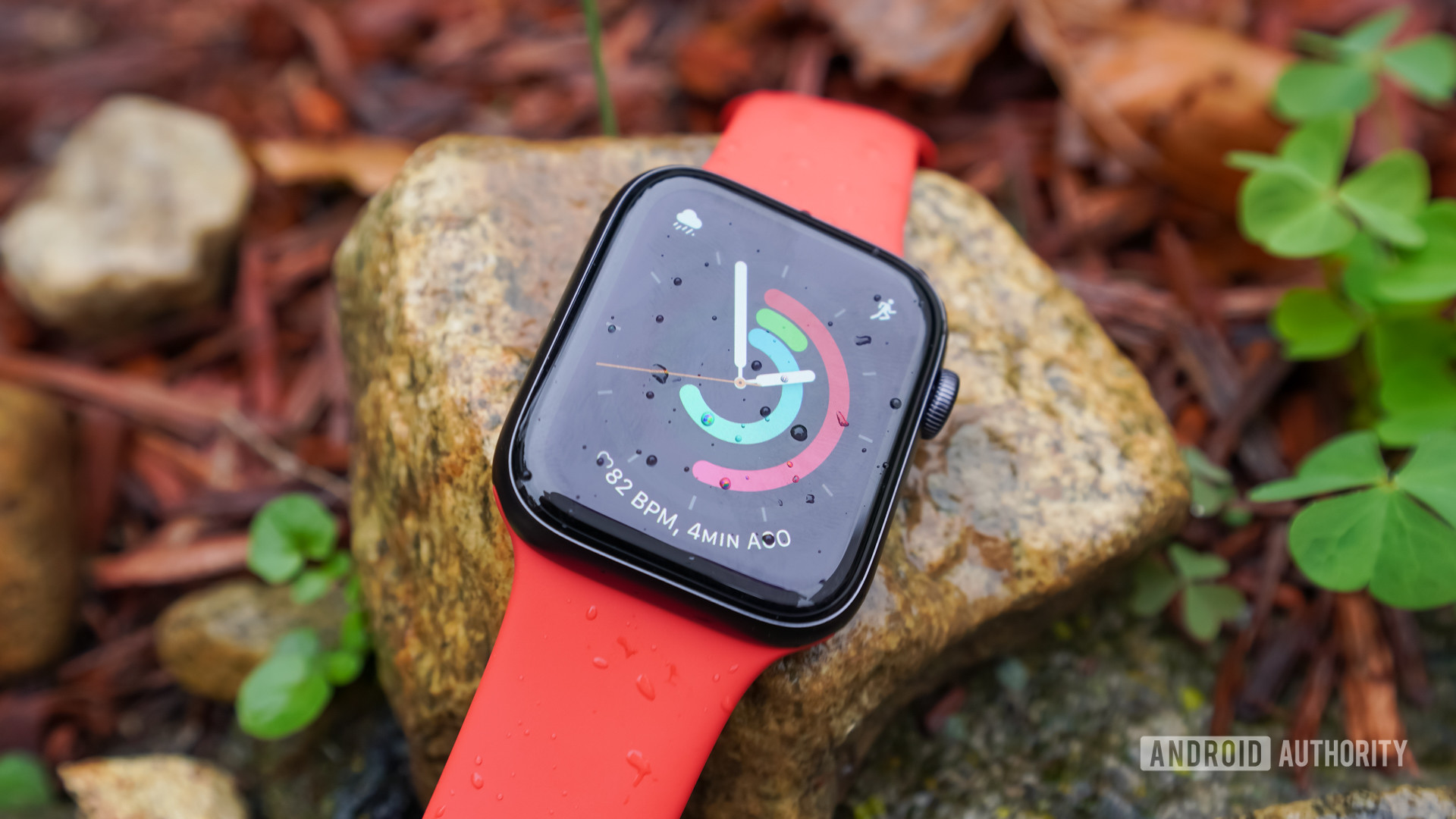 The Apple Watch SE is the smartwatch most people should buy.

The Apple Watch SE is a more affordable version of the Series 6 wearable. It makes lots of small trade-offs, which shouldn’t matter to most potential buyers, in order to reach the lower price point. It’s a true workout and smartphone companion that offers most of the features people want at a more palatable cost.

The Apple Watch SE is identical in design to the Apple Watch Series 6 save for two things: colors and materials. The Series 6 is offered on a nice range of shades, including silver, space gray, gold, blue, and red, but the SE is limited to silver, space gray, and gold. Similarly, where the Series 6 comes in aluminum, stainless steel, and titanium, the SE is only available in aluminum. Everything else is the same.

There’s not much to be said about the Watch’s design at this point, as it’s been carried over for a few years now (since the Series 4). The Apple Watch SE is available in two sizes: 40mm and 44mm. You can order it with a wide range of straps and add LTE for cellular connectivity if you wish. We reviewed the 44mm space gray model (GPS) with a red silicone strap. (We couldn’t get one of the new Solo Loop bands.)

The size and fit of the Apple Watch SE is good for me. The gently rounded underbelly is comfortable against the skin and the edges never dug into my skin. I don’t care for the feel of the plain silicone strap that came with our review unit (in fact, it gave me a rash.) It has a slick finish to it that just doesn’t feel good against your wrist. I’d much prefer one of the cloth-like loops. That said, the silicone strap offered a snug fit that wasn’t too tight.

The 44mm size is great, as it offers plenty of real estate across the 448 by 368 pixels. The SE doesn’t offer the always-on display functionality of the Series 6, but it lights up whenever you raise your wrist. I had no trouble viewing it outdoors under direct sunlight. One thing to note, the Series 6 offers sapphire glass on the stainless steel and titanium models. The Watch SE is limited to Ion-X glass for protection; it is more scratch prone than the sapphire.

The digital crown is still one of the best control tools for any smartwatch in the market. There’s a flush button below the crown that works well. The speaker slits are on the left edge of the watch. Myriad sensors are tucked into the glass on the bottom.

Apple gave the SE its S5 SiP processor, which has a 64-bit, dual-core engine. It’s paired with 32GB of storage, which is more than enough for some tunes. Other features of the hardware include the W3 chip for pairing with AirPods, an always-on altimeter, GPS, Bluetooth, Wi-Fi, and compass.

Battery life is rated to 18 hours of active usage. You’ll find that your mileage will vary greatly. For example, with just casual use of the watch, using it to monitor daily activity, for example, it easily reached the end of the day with a 50% charge. Tossing in just one GPS-tracked workout, however, will ding the battery significantly. Even so, I never found myself in battery trouble, even on long days that stretched from 7am to midnight. Recharging it takes about 90 minutes.

It all, the Apple Watch SE continues to be one of the most comfortable and functional smartwatches out there.

As with all Apple Watches, the Watch SE covers the gamut when it comes to monitoring health and fitness. It does lose some key features of the Series 6, however, including the ability to measure blood oxygen and to take an electrocardiogram. If you were counting on these, you’ll need to upgrade to the 6.

While those two heart health functions are absent, the Watch SE still monitors your heart rate constantly. It can tell you if you have a heart rate that is abnormally high or low, as well as signal you if it detects irregular heart rates. These could be indicators of heart problems. I tested the Apple Watch SE against an Apple Watch Series 4 that I have on hand and found the heart rate detection to be equivalent between the two. The Series 6 gets an upgraded heart rate sensor, so again you’ll need to spend more to get an even more accurate heart rate sensor.

Sleep tracking is a big feature touted by modern wearables and it’s one the Apple Watch SE punts on a little. Rather than fully track your sleep (we’re talking advanced features, such as REM cycle tracking), the app helps you set and target sleep goals. For example, say you want to achieve eight hours of sleep per night. The watch will tell you when to go to bed to reach that goal. The app relies on when you last use your iPhone for determining when you get to sleep. The Apple Watch SE does not track sleep as thoroughly as some Fitbit devices might, but it does cover the basics of time spent sleeping. If you want serious sleep tracking with advanced features, you’ll need to look elsewhere.

On the fitness front, you’ll find the Apple Watch is a fine tool to have strapped to your wrist. It can automatically track a number of workouts, such as walks, swimming, or cycling, and can manually track many more. I found indoor and outdoor tracking to be very accurate. For example, I took the Watch SE on a regular (outdoor) hike that I do and it got the mileage exactly right, with step counts that were about average for the trek. I also tested the Watch SE for walks on the treadmill. Its margin of error was within 0.03 miles, which is quite good over a 2.5-mile walk.

Smartwatch functionality abounds on the Apple Watch SE. It includes all the core behaviors you expect from a modern smartwatch.

First, and perhaps most importantly, apps. If there’s one thing the Apple Watch SE does well, it’s apps. Apple has an entire app store just for its smartwatches, and developers have actually filled it with wrist-sized versions of their smartphone apps. For example, I can use the Starbucks app to pay for coffee or the United app to scan my boarding pass, or I can use the Spotify app to control my playlists or the CNN app to check the latest headlines.

Apple stuffed a plethora of its own apps aboard the watch, too. Smartwatch essentials, such as calendar, messaging, stopwatch, and compass are aboard, as are nice-to-haves such as the camera shutter release, Apple Maps, and Apple’s Memoji app.

Last, there’s a new service called Family Setup. As long as you buy an LTE version of the Apple Watch SE and have an iPhone, you can setup multiple watches for the family. Think of it as the easiest possible way to get your kid a phone / smartwatch combo. Because the watch has LTE (this service does not work with GPS-only watches), it can send/receive messages, phone calls, as well as connect to the App Store for discovering apps. We were unable to test this, however, because we don’t have an LTE-capable Apple Watch.

If there’s one are other watchmakers are sorely behind Apple, it’s the apps and overall smartwatch experience.

You can spend as little as $199 on an Apple Watch or as much as $1,249, depending on the series and options you choose. The base prices are fairly straightforward. The Series 3, which is now the “budget” Apple Watch, slots in at $199, while the SE starts at $279, and the Series 6 starts at $399. Adding LTE, jumping to the larger screen size, or adopting a stainless steel band will set you back more.

Unless you’re on the strictest budget, I think you can safely ignore the Series 3. That $80 difference between the Series 3 and SE is truly not too much to ask for the dramatic improvement in features, such as the processor and display. The Series 6 gets you a lot of advanced features, but many of them, such as the ECG and SpO2, won’t be missed by all but the most dedicated fitness buffs.

In other words, the Apple Watch SE has become the Goldilocks option, as it finds the right balance between price and features.

If the Apple ecosystem in general, and Apple Watch in particular, are not for you, you have options.

The Apple Watch SE is a fine wearable. It excels at the basics, such as fitness and simple usability. It also lacks some serious features, such as advanced sleep tracking, as well as the electrocardiogram and blood oxygen sensors of the Series 6.

The SE is a definite and worthwhile step up from the affordable Series 3. It adds just enough functionality to be worth the extra cash. On the other side of the same coin, it’s a better value than the $399 Series 6. While the Series 6 will do a better job at some things, it’s not necessarily worth the extra dough for casual users.