Racket: NX is so futuristic it’s like a mix of tennis and squash. It has exciting physics and ball movements it’s also like the Wii on virtual reality. 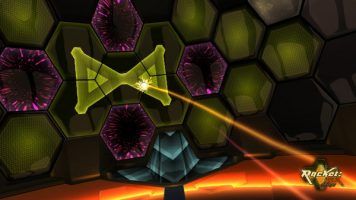 Racket: NX will get you sweaty after a few rounds.
Description:

Racket: NX is a wonderful mix of sci-fi and sports. Yes, if you haven’t been moving off your seat then this game is definitely for you. Even in the free version of this virtual reality game, you can have infinite training mode where you can play squash slash tennis in a circular room with hexagons to hit. Equipped with Wave Nx 3D Audio technology, players are tested in their spatial orientation making them to be alert at all times whenever a ball is airborne and bouncing around. The physics in this game is phenomenally good. It’s calibrated to have the least learning curve even to first time players of the game. Just have your HTC Vive motion controllers strapped to your wrists or they too can go flying off when the game gets intense and your hands too tired to strike.

Racket: NX just got the best ingredient for a very good VR game. It’s interaction, scenery and soundtrack. With interaction, the ball movements is as realistic as a real ball. To compensate for the weird slowing down of the ball, the player is set to play in outer space in the free demo, so a slow moving ball in mid-air can be forgiven. However, this was used by the developers to actually control the ball to your racket. This is great for beginners who may just always miss to hit the ball most of the time. Scenery goes next. The place is totally cool. The room and the neon lights is just great to be immersed in a futuristic, stylized game in VR. Soundtrack for this game is awesome. If you want to close your eyes you can actually hear the ball and know where it actually is. The Wave NX audio technology is definitely one of the greatest strength of this game.

The only gripes for Racket: NX is, in its initial release, have very limited features active. Multiplayer online would be nice to be able to play with other people from around the world and be like a different sport altogether. It is early to say what would be released for the full version but it would surely be a good one to wait for the HTC Vive.

We got some more virtual reality games in our VR Games section.