The Gallery – Episode 1: Call of the Starseed

Want to live out the fantasy of being inside a mystery movie? Well enjoy the Episode 1 of the Gallery, the Call of the Starseed.

The Gallery – Episode 1: Call of the Starseed 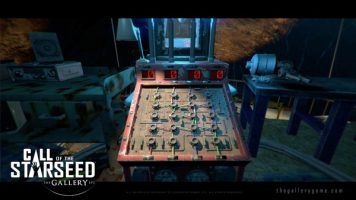 Find your sister and solve some puzzles along the way.
Description:

Call of the Starseed is more of a movie-like virtual reality game that incorporates puzzle and first person adventure. Your main goal as the character of the game is to find your missing sister and solve the puzzles you encounter along the way. For the HTC Vive and its touch controllers, having the amount of control which are all user-friendly and less glitchy than other HTC Vive games is really great to have. The graphics is so polished and would rival the latest triple A titles in PC gaming. The responsiveness and story telling, added with clever inventory management system with the player’s backpack, it’s easy to recommend Episode 1: Call of the Starseed.

There’s so much to love with Call of the Starseed and it’s more than just the amazing graphics. Let’s start with the gameplay. The opening activity of this VR game starts relatively slow but as you discover and go deep into the game, you get to enjoy the amazing work the developers have done with the interaction with the virtual objects. The player are given cues as to what object can be picked up and what is important to pick up. The backpack is accessed by reaching out the back using the HTC Vive controllers. It then reveals the inventory of the game where the items you collected are shown in a very cool way using wireframe layouts of the bag.

The puzzles are subtly put out, leaving the player to discover the answers on how to go on with the game using clues.

As what the long title tells us, The Gallery – Episode 1: Call of the Starseed is just the first episode. Very much like episodal games, it will eventually have the next one. With the level of details of this virtual reality game, it is a wise decision that it gets broken down to different episodes but a downside for those just wanting the whole thing in a single game. Purchasing another episode could be a pain but for die hard fans, this won’t be a problem.

This won’t make this installment of the game less appealing or good of a VR game.

We got some more virtual reality games in our VR Games section.