❤ Twitter will soon let you customize the app’s navigation bar 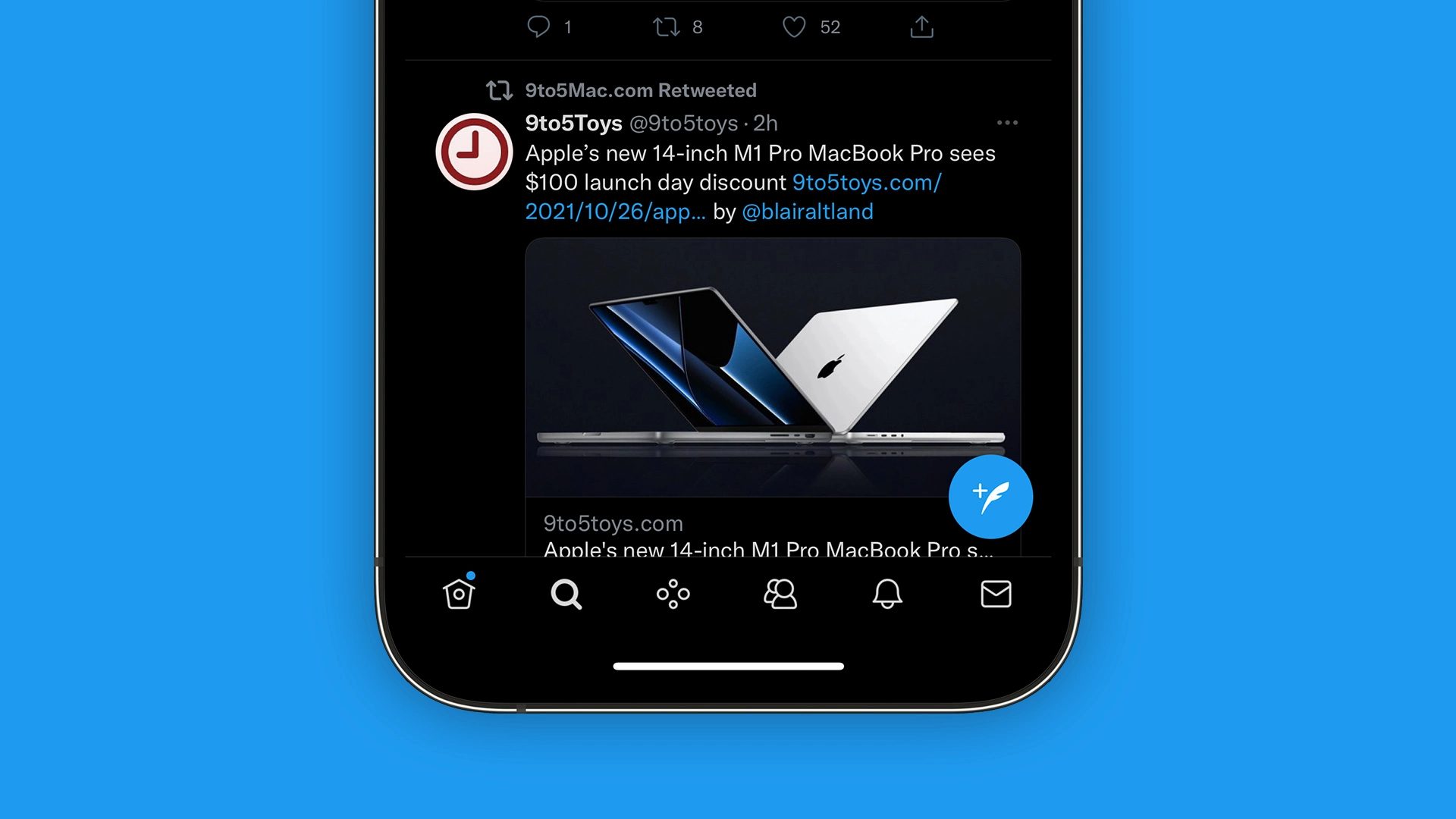 Twitter has been testing several new features for its mobile app recently, and users are about to get even more new things. The company is now working on an option to customize the navigation bar of the Twitter app on iOS and possibly Android as well.

As revealed by app researcher Alessandro Paluzzi, who is known for sharing hidden features on Twitter and other social networks, a new option found in the Twitter app will let users change the tabs in the navigation bar.

The app’s navigation bar shows Home, Search, Notifications, and Messages icons by default. However, with new features such as Spaces and Communities, Twitter’s navigation bar has been getting a bit bloated. With this change, which is still under development, each person will be able to choose the most useful shortcuts to add there.

Paluzzi says users will be able to customize the navigation bar with two to six items, with the Home icon being mandatory. There will also be tabs to access Lists, Bookmarks, Profile, and even Monetization.

The screenshot below shows what the new option should look like:

#Twitter keeps working on the ability to customize the navigation bar 👀

Here's how you can customize the navigation bar 👇🏻 pic.twitter.com/HL0bf8Tw8t

Unfortunately, the new customization option is not expected to be available to all users. Based on his findings, the app researcher believes that Twitter will restrict the new feature to Twitter Blue subscribers – which costs $2.99 per month and unlocks additional features in the Twitter app.

It’s unclear when the new option will be officially rolled out to users.

Following the release of iOS 14.5 to the public last month, multiple apps began asking users to enable the App Tracking option. With the latest version of the Twitter app for iOS, users are now being asked to enable tracking in order to receive “relevant ads.”

The new prompt was implemented with version 8.65 of the Twitter app, which is now available on the App Store. Once you install this version of the app, Twitter might ask you if you want to enable the App Tracking option. The social network argues that enabling tracking will let Twitter provide more relevant ads according to the content you like.

More choices for relevant ads on iOS 14.5. Keep ads relevant to you by allowing Twitter to track data from other companies on this device, like apps you use and websites you visit. You can decide if you’ll allow tracking in the iOS prompt and you can always change this later in your device settings.

By tapping the Continue button, the user is redirected to the iOS Settings app in the Tracking menu. There you can opt to enable App Tracking for Twitter or keep it disabled. By default, tracking for third-party apps is turned off.

With App Tracking Transparency, apps can no longer track users across other apps and websites without first asking them. Most apps use this data to display advertisements based on what the user searches for on the web or what they have installed on their device. According to a recent research, only a small amount of users have been letting apps track them with this new option.

At the same time, there are still multiple users who are not being able to access App Tracking Transparency settings in iOS due to the grayed out toggle — even after Apple said it fixed this issue with iOS 14.5.1.

❤ How to Enable Dark Mode on Twitter for iPhone and iPad

Twitter for iOS offers a “Dark Mode” setting that shifts the apps appearance to a darker color spectrum of grays, blues, and blacks, making it easier on the eyes at night or in dimmer lighting situations.

Of course some users may just prefer the Twitter app appearance when in dark mode or night mode too, since it looks a bit more sleek on an iPhone or iPad.

Whatever the reason, you can enable Dark Mode in Twitter app for iPhone and iPad rather easily.

You’ll obviously need to have Twitter and be a twitter user for this to be relevant, if you’re not one or don’t intend to be, then this will not apply to you. But for those who do use Twitter to follow the latest tweets, read on.

How to Enable Dark Mode on Twitter for iOS

Night Mode enables immediately and the entire app color spectrum basically inverts from a bright whites and grays to dark grays, blues, and blacks. The visual difference is notable, and it’s certainly more pleasant on the eyes in dim lighting situations.

Increasingly, many apps are allowing a “Dark Mode” or a “Night Mode”, and by no means is Twitter alone. iBooks for iOS has a Night Theme, Safari Reader mode on iOS can be customized to be a Dark Mode (and Safari Reader for Mac can change appearance too), YouTube has a dark mode, iOS sort of has one with Smart Invert, and even Mac OS has a Dark Mode though it only applies to menu bars and the Dock and does not turn the overall windowing UI darker.

If you like apps having a darker appearance, these are all good options to explore and potentially enable, in addition to using features like Night Shift for iOS and Night Shift for Mac OS, which also make nighttime and limited lighting screen viewing a bit easier on the eyes too.