❤ How to erase your iPhone, iPad, or Mac remotely after a theft 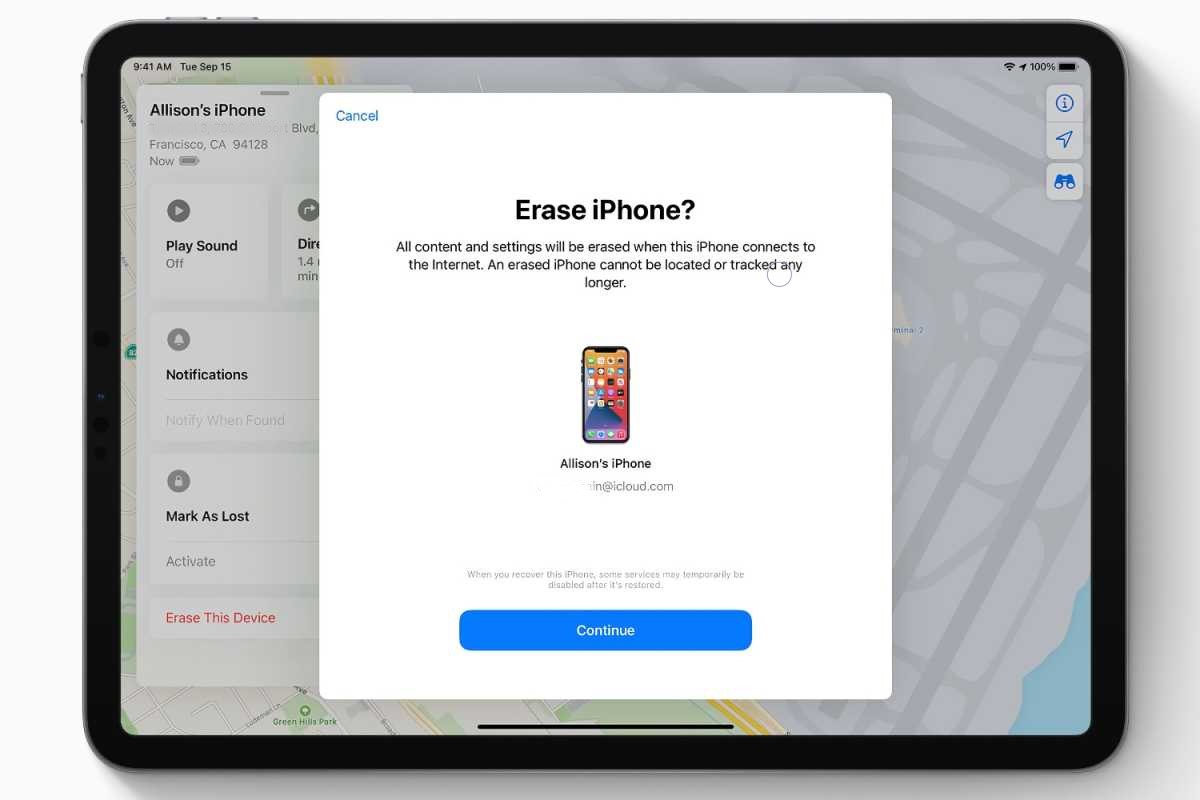 You can ensure your data remains safe through erasure.

One of the most powerful features added years ago to macOS and iOS was Find My iPhone—and iPad and Mac. The iCloud-connected service lets you track an accidentally misplaced item and potentially recover a stolen one. With the service active on a device, you can use Find My for macOS, iOS, or iPadOS or via iCloud.com to erase your computer, phone, or tablet or to queue an erasure signal for the next time the device is on the Internet. iPhones and iPads with a Secure Enclave and Macs with FileVault enabled simply delete the encryption keys for storage. This renders the data irretrievable. (It doesn’t affect your local or iCloud backups, so don’t worry.) On a Mac with a T2 Security Chip or M1 Apple silicon, disk encryption is always enabled even if FileVault isn’t, allowing Secure Enclave to destroy the disk encryption keys instantly even with FileVault disabled. Pre-Secure Enclave iPhones and iPads and Macs that predate the T2 Security chip and have FileVault disabled take longer to delete files, as each byte of data has to be overwritten. If you’re not sure whether your iPhone, iPad, or Intel Mac has a Secure Enclave, consult the list Apple provides here. You can determine if FileVault is enabled by going to the Security & Privacy preference pane’s FileVault tab.

How to erase a device 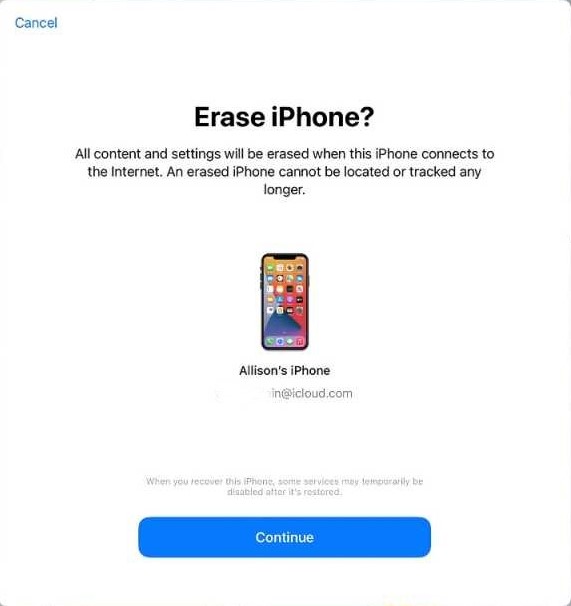 Apple warns you about the consequences when you’re about to erase your Mac remotely.

Apple’s tweaked the process slightly for its native apps but left iCloud.com virtually untouched for years. In macOS, iOS, or iPadOS, launch the Find My app. Tap the Devices tab and then tap your hardware. (If you have Family Sharing enabled, you can also see the devices of family members.) On an iPhone or iPad, tap Erase This Device and follow the prompts. On a Mac, right-click the device and select Erase This Device.

If the device is connected to the internet via whatever method it has at its disposal—Wi-Fi, cellular, tethering, a…dial-up modem—erasure begins immediately after the Mac receives the signal relayed via Apple’s servers. In the cases noted above, the drive or flash storage almost instantly becomes irretrievable.

The erase command is queued by Apple, so if the device ever is briefly back on the internet, it erases itself. Once your device starts wiping its data, finding its location via Find My is no longer possible.

For devices that ne’er-do-wells have taken offline or put in a metal box, they may never return online to receive an erase command. But for iPhones, iPads, and Macs with a Secure Enclave, the stored data can’t be interacted with unless someone also obtained the password. (For a running Mac, there might be cracks that work, but it’s unlikely; if powered down and FileVault is enabled, effectively impossible.) 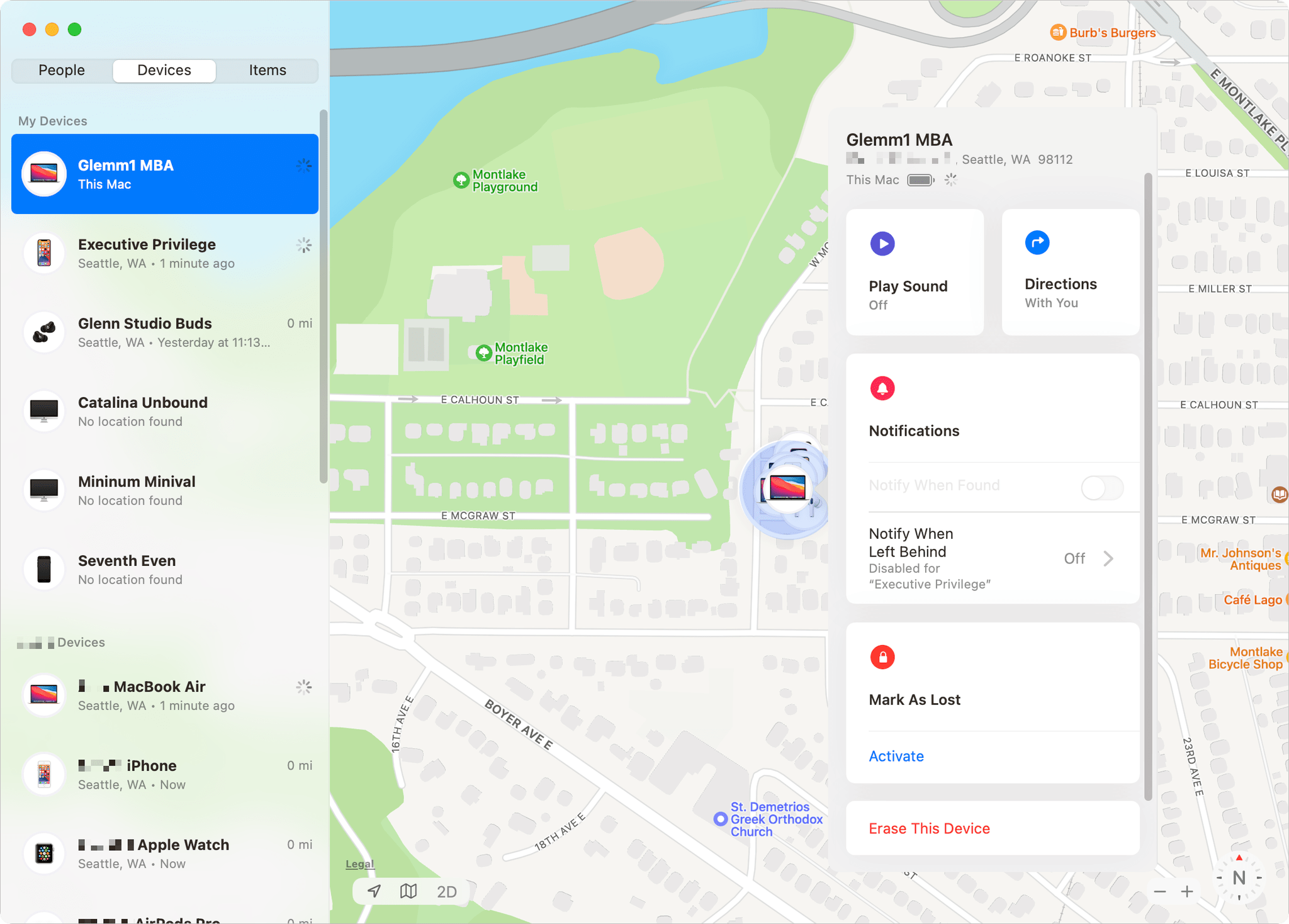 Find My lets you see all your devices and select among them for several purposes—including erasure.

It can be wiped, which securely removes your data—and then Activation Lock kicks, a part of Find My. (Macs have a few additional requirements.) Activation Lock prevents an erased device from being set up again without knowing the iCloud password associated with the account that turned on Find My on it.

Criminal groups have apparently figured out ways to bypass Activation Lock in at least some cases, but those methods still require erasing the device, so your data remains inaccessible.

A future of remote erasure?

I can imagine a future in which the Find My Network could be used to trigger erasure, too. Right now, the system is used entirely as a passive relay: an AirTag tracker and most Apple devices can broadcast their position over Bluetooth in a carefully encrypted manner. Nearby Macs, iPhones, and iPads with Find My Network enabled relay this data via Apple so you can get updates about location without the party relaying it knowing who you are or which device is transmitting.

But AirTags point the way to a potential two-way process. If Apple determines an AirTag has been traveling with you and you’re not the owner of it, you’re presented with a dialog on an iPhone or iPad that lets you play a sound. That command is passed via Bluetooth.

An iPhone that spots an unknown AirTag traveling with it over time can send a signal to prompt an action on the AirTag.

that preserves privacy and yet could be turned to device erasure, too. In Apple and Google’s joint notification system, your smartphone recorded all specially formatted Bluetooth signals around you and retained for those a period of time; this is quite similar to the signals emitted for the Find My Network by Apple devices.

If someone who had been near you receives a COVID diagnosis and enters a code into their smartphone provided by their healthcare provider, the encrypted Bluetooth IDs associated would then be uploaded to a database that all devices in your region or country regularly downloaded and compared to stored IDs.

Now, consider this: what if you could report your device as stolen and that you wanted it erased. That signal would then be distributed in encrypted form across all Apple hardware in your area or an expanded region. If any of those devices picked up an encrypted Bluetooth signal that matched, they could transmit a similarly encrypted erasure instruction. Thieves try to disable all the wireless on a device, but Bluetooth is often harder to block than Wi-Fi or cellular.

The safeguards around this would have to be strong, but it’s not far-fetched—just far-reaching!

Are you a night time Mac user? Many of us are, and MacOS has a lot of great features that can improve low light computing experiences.

Whether you’re working in the dim evening or late at night, or even just in a dark room, we’ll share with you some helpful tips to make low-light Mac usage even better. Perhaps you’ll find these tricks will help you to reduce eye strain and might even make you more productive as a result!

Note that some of these features are limited to MacOS Mojave 10.14 and later, like the full Dark Mode theme, but the same general principles will apply to other Mac OS versions as well.

Many of the Mac displays are extremely bright, which looks brilliant and allows for vibrant colors and screen imagery, but at night or in low light you’ll probably want to reduce that screen brightness considerably.

You can use the keyboard brightness controls, or adjust brightness through the Display preference panel on Mac.

Another great benefit to reducing screen brightness is for Mac laptops, where you’ll almost certainly notice a significant boost to battery life while the screen is more dimmed.

2: Use Night Shift for a Warmer Screen Hue

Night Shift is the great feature that warms the display colors of a Mac during the evening and night time hours, so that the screen is putting off less blue light. There are many proven benefits to reducing blue light exposure, and you might even notice less eye strain when using Night Shift too.

Enabling Night Shift on Mac is done through the Display preference panel, setting it on a schedule or to match the daytime and nighttime hours is an easy way to appreciate the app as it sets in automatically. Generally speaking, the warmest setting offers the best results for most users.

For Macs without Night Shift support, you can also use Flux for a similar effect

Dark Mode takes all of the bright white and bright gray user interface elements on a Mac and makes them dark gray, which is perfect for working at night and in low light situations. Enabling Dark Mode on the Mac is simply done through the “General” preference panel in MacOS.

Currently you have to manually enable and disable Dark Mode when you want to use it, but perhaps a future version of MacOS will allow for automatic Dark Mode similar to how Night Shift and Dynamic Desktops works.

For Mac users who don’t have the full Dark Mode theme, earlier versions of Mac OS allow for enabling a Dark menu bar and Dock instead.

4: Use Dark Wallpapers or Dynamic Desktops

Dynamic Desktop automatically changes the wallpaper with the time of day, using a darker picture in the evening and night hours. This helps to reduce the brightness coming off the display, making it easier on the eyes to stare at a screen. It also looks great.

If you don’t have or like Dynamic Desktops, then just setting a dark wallpaper can offer the same effect of reducing the amount of brightness coming off the display.

Safari Reader Mode is excellent for many reasons, but if you’re browsing the web or reading the web at night, placing an article into Safari Reader is fantastic because you can theme Reader so that it matches Dark Mode on the Mac, taking black on white text and turning it into white on dark gray or white on black.

Enabling Reader Mode in Safari is just a matter of clicking the Reader button in the URL bar of a web page, and then you can click the “aA” button to customize the appearance of Safari Reader on Mac as well including changing color scheme, fonts, and text size (using larger text at night is easier on the eyes for many of us).

Oh and if you’re on the web using YouTube, you can try YouTube dark mode theme too.

Unrelated to working at night, but another fantastic Safari Reader tip is for printing an articles content only, without ads or other page content that can use unnecessary printer ink.